Have you ever wanted to speak directly to (perhaps even challenge) a world-known climate scientist?

Have you ever wanted to know the real truth about Ag and its supposed contributions to “Climate Change?”

Have you ever wanted those golden nuggets of facts to combat the claims that your livestock, farming, timbering, or other Ag-related practices are causing things like “global warming,” unprecedented wildfires, ocean acidification and bleaching, “sea rise,” and “biodiversity loss?”  Have you ever just wanted to laugh about all of it?

If yes, then holy cow, do we have a great Zoom talk for you!! On Friday, May 7th starting at 5:30pm PST/8:30pm EST, Dr. Willie Soon, a Harvard-Smithsonian Astrophysicist and Geoscientist and leading authority on the relationship between solar phenomena and global climate, has tailored a presentation for those of us in Agriculture who simply want the truth (and enjoy a laugh with reality along the way). Afterwards, Dr. Soon will answer some of our most pressing questions.

“Seatbelts are not provided…so please bring your own!”  ~ Dr. Willie Soon

His research and discoveries challenge “computer modelers” and global warming enthusiasts/advocates who consistently underestimate solar influences on cloud formation, ocean currents, and wind that cause climate to change. As a result, Dr. Soon has faced and risen above cruel, unethical, and libelous attacks on his research and his character, thus becoming one of the world’s most respected and influential voices for climate realism. In 2018, he founded the Center for Environmental Research and Earth Sciences (CERES-science.com) in order to tackle a wider range of issues and topics without fears nor prejudices.  In 2018, Hollywood Improv invited him to debate “Climate Change”…Dr. Willie not only crushed the other panelists with facts, but in humility and humor as well.

Dr. Soon is an astrophysicist at the Solar, Stellar and Planetary Sciences Division of the Harvard-Smithsonian Center for Astrophysics, a position he has held since 1997. He served as receiving editor for New Astronomy from 2002-2016, astronomer at the Mount Wilson Observatory from 1992-2009. He is also on the editorial board of Geoscience, an MDPI publication since 2020.

Dr. Soon has held the role of visiting professor at various institutions including University of Putra, Malaysia, Institute of Earth Environment of Xian, China and State Key Laboratory of Marine Environmental Science at Xiamen University.

Dr. Soon earned Bachelor’s and Master’s degrees in Science and a Ph.D. in Aerospace Engineering from the University of Southern California.

Dr. Soon’s honors include a 1989 IEEE Nuclear and Plasma Sciences Society Graduate Scholastic Award and Rockwell Dennis Hunt Scholastic Award from the University of Southern California for the most representative Ph.D. research thesis of 1991.

In 2004, Soon received the Petr Beckmann award for courage and achievement in defense of scientific truth and freedom from the Doctors for Disaster Preparedness community.

In 2014, Dr. Soon received the Courage in Defense of Science Award from the George Marshall Institute.

In 2017 he received the Frederick Seitz Memorial Award from the Science and Environmental Policy Project.

Dr. Soon is the author of The Maunder Minimum and the Variable Sun-Earth Connection (World Scientific Publishing Company, 2004). He is the coauthor, withSebastian Lüning, of “Chapter 2: Solar Forcing of Climate” in Climate ChangeReconsidered II: Physical Science (The Heartland Institute, 2013); the author of “SunShunned” in Climate Change: The Facts 2014 (The Public Affairs Institute: Melbourne,Australia); and coauthor, with S. Baliunas, of “A brief review of the sun-climate connection,with a new insight concerning water vapour” in Climate Change: The Facts 2017 (ThePublic Affairs Institute: Melbourne, Australia).

In summary, Dr. Soon has published a total of 102 refereed papers, at least 37 book chapters and magazine articles, and 86 invited presentations at various universities and international and national meetings.

“The whole point of science is to question accepted dogmas. For that reason, I respect Willie Soon as a good scientist and a courageous citizen.’’

The citation history of Dr. Soon can be studied here: https://scholar.google.com/citations?view_op=list_works&hl=en&authuser=1&user=IVp52k4

The official work webpage is here:

Follow Dr. Soon (#climateguy Willie) for his many postings at Parler:

Dial by your location

Willie Soon is a great friend. I spent time with him in Calgary and also in Boston. He is definitely one of the very best guys anywhere to drain a few beers with – brilliant, quick and funny.

CLIMATE CHANGE, COVID-19, AND THE GREAT RESET
A CLIMATE, ENERGY AND COVID PRIMER FOR POLITICIANS AND MEDIA
By Allan M.R. MacRae, Published May 8, 2021 UPDATE 1e
Download the WORD file
https://thsresearch.files.wordpress.com/2021/05/climate-change-covid-19-and-the-great-reset-update-1e-readonly.docx

ALLAN MACRAE
March 22, 2020 4:54 am
https://wattsupwiththat.com/2020/03/21/to-save-our-economy-roll-out-antibody-testing-alongside-the-active-virus-testing/#comment-2943864
No reactions yet to my “straw man” alternative proposal (of 2020/03/21) to only isolate high-risk groups and GET EVERYONE ELSE BACK TO WORK SO WE DON’T DESTROY THE ECONOMY because of the corona virus quarantine?
I expected to be stoned to death by now with “how dare you’s” about my proposal. We may not have enough data to weigh upsides vs downsides of my proposal, but we should have such data soon.
DESTROYING OUR ECONOMIES, ESPECIALLY MILLIONS OF SMALL BUSINESSES AND THEIR LOW-INCOME EMPLOYEES IS NOT WITHOUT ITS OWN DIRE CONSEQUENCES.
Think Big Picture, good people.
___________________________

Here is my original March 21, 2020 recommendation:
ALLAN MACRAE
March 21, 2020 10:22 pm
https://wattsupwiththat.com/2020/03/21/to-save-our-economy-roll-out-antibody-testing-alongside-the-active-virus-testing/#comment-2943724
[excerpt]
LET’S CONSIDER AN ALTERNATIVE APPROACH, SUBJECT TO VERIFICATION OF THE ABOVE CONCLUSIONS:
Isolate people over sixty-five and those with poor immune systems and return to business-as-usual for people under sixty-five.
This will allow “herd immunity” to develop much sooner and older people will thus be more protected AND THE ECONOMY WON’T CRASH.
___________________________

The NASA IT weenies at NASA/GSFC SDO currently have the replay SDO images “down for maintenance.” Otherwise I’d show it to you a nice flare burst in soft X-ray.
With this continued activity, SC 25 is likely not going to be a Dalton minimum-like cycle. SC25 Pretty much like SC24 or higher is now in the cards.

I was able to get the soft X-ray flash from the SDO daily movie download in 131 Ångström (13.1 nanometer), while the browse images tool is still under maintenance. See still image capture here:

…and so far you are correct. 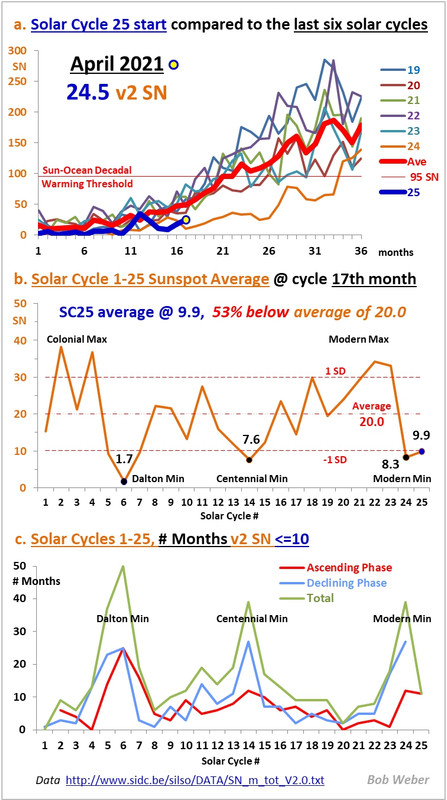 SC25 appears is set to be at or above SC24. Really not much doubt at this point.
If Elon Musk wants to go to Mars with bunch of suicidal astronuats, it appears as if 2024-25 woud be a good solar SC25 max to minimize GCRs for the unfortunate crew.

reading that I realize I meant “the east solar limb”. East and west are backwards from our looking on perspective.

How would it be possible to get a link to download Dr. Soon’s presentation? Thank you in advance. Unfortunately it was to late for me to join the Zoom-event.

I don´t know. Eventually as a first step, the slides would be a good starting point.

Listening to the good old independent BBC this morning, the subject of news coverage of the recent UK local elections was being covered, with concerns that coverage wasn’t good enough. The BBC’s answer was there had been budget cuts across the BBC news output, & the BBC rep said we have to cover a whole range of subjects, including “climate”, & “science”! Curiously, I always naively thought that the study of climate was science, however, the BBC seem to consider that science & climate are two different subjects! Am I missing something??? I also think that the UK Wet Office are overdue in submitting a plea to guvment for even more hard-pressed taxpayers dosh for an even more powerful “puter”, to improve their climate predictions! What’s the betting they’ll get it? Still, they haven’t yet been able to predict the 6 numbers on the Lottery as yet, but know with great confidence what the climate will do 100 years from now!!! :-((

The BBC needs do another interview with David Attenborough, since he finally he finally got something right about climate change — “The Garden of Eden is no more” … https://newtube.app/user/RAOB/rNl4zJm

“The whole point of science is to question accepted dogmas.”

And who does that? Answer: Skeptics.

You can’t have real science, or progress, without skeptics.

The alarmists thought of that, and came up with skeptical science.
And like all things progressive does the exact opposite of what it says on the tin.

I am glad to read that Willie Soon is the astrophysicist involved in this, because I know all too many of them who couldn’t change a lightbulb.

Just in time for agriculture to go bye-bye. It is now evident that we humans are carnivores and that the diet of carnivores is the proper human diet. We suffer horribly on plant based high carbohydrate diets. We have a world wide obesity epidemic even in poor countries.

Carnivore diet is even better for animals, as spraying plant foods with chemicals kills more than eating grass-fed beef.

“Have you ever just wanted to laugh about all of it?” Sure, they’re running out of science and are now doing standup!