The transmission and viewing of online videos generates 300 million tonnes of carbon dioxide a year, or nearly 1 per cent of global emissions. On-demand video services such as Netflix account for a third of this, with online pornographic videos generating another third.

This means the watching of pornographic videos generates as much CO2 per year as is emitted by countries such as Belgium, Bangladesh and Nigeria.

That’s the conclusion of a French think tank called The Shift Project. Earlier this year, it estimated that digital technologies produce 4 per cent of greenhouse gas emissions and that this figure could soar to 8 per cent by 2025.

Now it has estimated the CO2 emissions due to online videos alone. The report’s authors used 2018 reports by companies Cisco and Sandvine to work out global video internet traffic. They then estimated how much electricity was used to carry this video data and view it on different devices, from phones to TVs.

online pornography produces as much CO2 as Belgium

Makes sense, as it can result in heavy breathing.

Ha! I see what you did there.

0
Bryan A
Reply to  Thomas

0
R Shearer
Reply to  Bryan A

Excluding my reply, best thread since ‘69.

Is there one too many letters in that title?

How does the CO2 of streaming compare to 15min humping ? Not counting the carbon emissions involved in getting a girl into bed in the first place. It seems to be a very incomplete study of the question.

Save the planet, finish quicker.

Maybe they could propose buying carbon offsets for the CO2 produced by viewing time.

Don’t forget, it can cause blindness, too.

No, you can do it just until you need glasses and then stop ……

There’s every bit as much filth in a Dyson

0
Bryan A
Reply to  fretslider

The nice thing about Hoover’s, they have no teeth. And if you get the right one, it’ll have a flat top where you can set your beer down. 😃

0
Gerry, England
Reply to  Bryan A

I have a battery hand vacuum that I think actually came as a bonus(?) with a proper big plug in job with tons of power, I didn’t directly buy it. Effing useless. Lasts less than 10 minutes which could make it ideal for male users as that is probably as much as we can be bothered with. Better to use my proper hand job which is so powerful if fitted with a funnel can pick up a bowling ball. Hmm, lots of double entendres there given the topic.

They do use a lot of rechargeable devices.

Blame Al Gore, he claimed that he, “invented the internet”.

Not fair to assume what she’s looking at. She might be checking her husband’s browsing tracks to see what he’s been watching.

The picture is awesomely not connected to the article. Well, there’s a laptop. And an adult user.

In a Live Cycle Assessment, one needs to compare the Business As Usual case to the alternative. Let’s assume the BAU case is dating. One needs to wash, dress, put on perfume (or cologne as the case may be), use commercial beauty products (mostly made from petroleum sources), drive to the opposite sex and pick them up, go to a show, have dinner, dessert, make out, get hot and bothered, take the person to a hotel (or other quite secluded spot, or home), and enjoy the rest of the evening. Then calculate the GHG emissions for this activity.

Next you need to compare the BAU case to the alternative, which is staying at home, watching a video, and imagining doing the BAU case. Then calculate the GHG emissions for that case and compare the two.
Which one has the lower carbon intensity?

Now from a more human standpoint, one needs to determine which activity is more enjoyable and will be conducted regardless of the carbon intensity involved.

Each person need to make their own choices here and they can use the GHG emissions information to influence their choice or they can ignore it and just go one with life. Your choice.

Your BAU scenario tends to eventually lead to the creation of children, which I am told is bad for the environment…

0
SMC
Reply to  Jeff in Calgary

That’s what birth control is for.

0
Bryan A
Reply to  Jeff in Calgary

0
ozspeaksup
Reply to  Jeff in Calgary

My favorite Al Gore observation is that, although population and GDP have gone up a lot since WW2, the weight of goods produced has not.

Between 1977 and 2001, the amount of material required to meet all needs of Americans fell from 1.18 trillion pounds to 1.08 trillion pounds, even though the country’s population increased by 55 million people. Al Gore similarly noted in 1999 that since 1949, while the economy tripled, the weight of goods produced did not change. link

The same does not seem to be true of energy consumption. link We can use technology to reduce the amount of physical material we consume but that seems to mean we will consume more energy as a result.

Somehow this is all related to Entropy…

The service economy doesn’t weigh much… I’ll bet the weight of China’s manufactured goods has increased a little in that time period.

As far as energy consumption goes, Vaclav Smil and others have long noted that historically with every substantial increase in conservation (energy efficiency) actually led to higher overall consumption because energy use becomes more affordable to more people.

Thanks for the reminder of the name. I’d forgotten the name of that phenom tsk tsk.

Umm yes, isn’t that what they are talking about?

wow this will have warmist Incels gnashing their teeth even more;-))))) roflmao

What fraction of the CO2 generated by Nigeria is related to the scam EMAIL industry?

Think tanks obviously don’t have a lot of sh** to do.

On second thought, no I wouldn’t.

How does this compare to on-line gaming? https://www.motherjones.com/environment/2018/11/video-games-electricity-carbon-footprint/

“So just how big is gaming’s environmental footprint? Globally, PC gamers use about 75 billion kilowatt hours of electricity a year, equivalent to the output of 25 electric power plants. (And that doesn’t include console games.) In the United States, gaming systems consume $6 billion worth of electricity annually. In California, where the analysis was centered, video gaming uses more power than electric water heaters, cooking appliances, clothes dryers, dishwashers, or freezers. As the report concludes, “video gaming is among the very most intensive uses of electricity in homes.” And more power means more greenhouse gas emissions: American gamers emit about 12 million tons of carbon dioxide annually—the equivalent of about 2.3 million passenger cars. Games are rated for things like sex and violence, Mills points out, but games and gear are “silent on their carbon footprint.”

BBC is reporting Manhattan (size iceberg) is on the move.
https://www.bbc.co.uk/news/science-environment-48920168
meanwhile some good images from the Japanese spacecraft Hayabusa2 that made second touchdown on an asteroid called Ryugu
https://www.space.com/incredible-asteroid-ryugu-landing-photos-japan-hayabusa2.html

Something else on the move according to the International Business Times and NASA :

—-“So far, 2010 PK9 has been keeping a relatively safe distance from the planets that it visits. As indicated in CNEOS’ projections regarding the asteroid’s future visits, Earth is safe from a possible impact event.
Of course, the risk of 2010 PK9 hitting Earth still lingers since the projections probably do not take into account the forces in space that can alter the asteroid’s trajectory. For instance, a different and unknown asteroid could collide with 2010 PK9, nudging it into a path straight to Earth.
2010 PK9 could also get pulled by the gravitational forces of Mercury, Venus and Earth. This could alter the asteroid’s current course and bring it into a collision path with Earth in the future.”—

Manhattan is small fry compared to antarctic icebergs. This one is bigger than Delaware. However it will probably not last very long since it is in the western Weddell sea, the only area in the Antarctic where icebergs tend to move northwards into warmer waters: 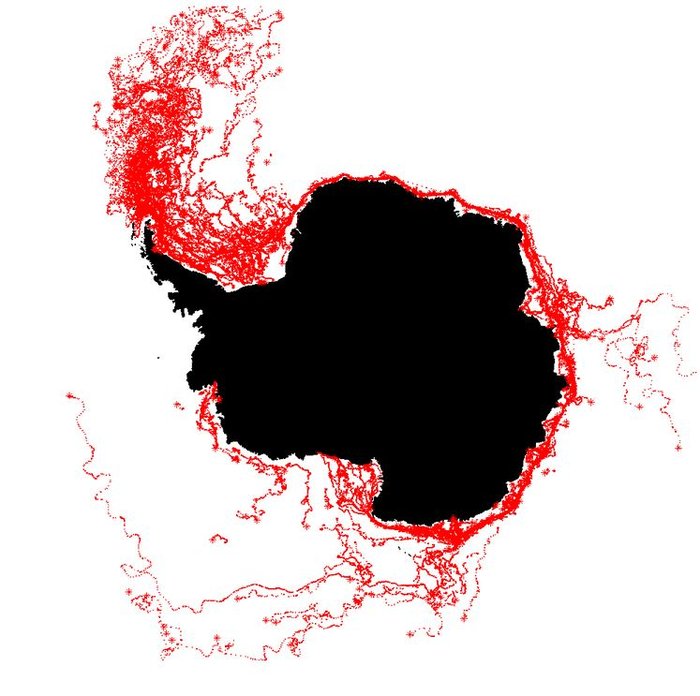 We need a new MHD (Manhattan-Hiroshima-Day) system of measures; this iceberg might be about 0.1KM(anhattans) and to melt it down will require 2KH(iroshimas) of energy in the next 0.73KD(ays).

And still the planet is CO2 deficient..

So if MSNBC, The Guardian, Slate and Vox were banned GW would go away?

How many Manhattans is that? Also, how many Hiroshimas does said CO2 represent? We need accuracy.

I challenge Jack Dale, Mosher, Griff, and all the other alarmists to do the same.

Nah, Carlos went to jail. Huma got off.

Yep… There’s no accounting for taste.

What about cat videos? There are an increasing number of little old women…

Search it. Watch it. Laugh your A$$ off. There is, BTW, nothing remotely pornographic about the video.

Here is a longer version…

It appears they are only including CO2 as a byproduct of generated electric power … they forgot the additional CO2 production as a byproduct of increased metabolism. So one could probably add The Netherlands to that analogy.

Yeah but that was after Wollonia Belgium started taxing charcoal grills. https://sputniknews.com/world/2007040362999935/

“The local authorities plan to monitor compliance with the new tax legislation from helicopters, whose thermal sensors will detect burning grills.”

No hypocrisy there, then..

Of course not, it was a spoof.

???
Belgium simply existed during the Battle of the Bulge.
Sadly, Belgium citizens in the way of the German attack suffered tremendously. They may have survived slightly better during the allied recovery of Belgium territory; but Belgium’s buildings and infrastructure suffered tremendously as Germans tried to make the Allies battle for every foot.

Belgium Resistance fighters kept operating in secret as they had since Germany first invaded them. Overt actions resulted in German retaliation against civilians.

I feel no shame or guilt.

“That’s the conclusion of a French think tank called The Shift Project. Earlier this year, it estimated that digital technologies produce 4 per cent of greenhouse gas emissions”

I take this to mean 100% of digital technology electricity usage produces 4% of all GHG emissions.

One suspects that emissions produced from developing, designing, manufacturing, assembling, transporting and installing technology do not count.

“transmission and viewing of online videos generates 300 million tonnes of carbon dioxide a year, or nearly 1 per cent of global emissions.”

I read this as transmission and viewing of online videos generates 25% of the GHGs produced by digital technologies.
One site claims Belgium emitted 117.443 Kilotons of CO₂ equivalent in 2015.

Another site claims that Belgium emitted 130 Megatons of GHG in 2014.

“On-demand video services such as Netflix account for a third of this, with online pornographic videos generating another third.”

Placed into context:
A third of the 1% that represents one fourth of the 4% GHG emissions attributed to digital emissions, is attributed to each:
1) On-demand video services.
2) online pornographic videos.

Walk along any street, visit any home, stop in any business, government office, etc. anywhere.
Four out of every twelve digital devices will be showing pornographic videos…

Once one digs into virtually any climate related series of estimates, reality does not reflect the alarmist wishful thinking.

Get rid of Belgium then! 😂

Even mastubation is no longer considered safe sex