Added: 11/11 8:30AM PST See update below. Records were set over the past two days at Central Park, but the 144 Year old record still stands.

Dr. Ryan Maue has been tracking the forecasts for the Northeast, and the result is…ah, chilling. Maue says the “polar vortex” is responsible for the exceptionally cold and dry air invading the Northeast USA.

Why is it so cold and dry over Midwest and Northeast U.S. ?
Blame the upper-level tropospheric "polar vortex" for blasting cold, dry Canadian continental Arctic air. pic.twitter.com/NuIlvguuRJ

He goes on to say that the all time record for New York City of 22°F forecast by morning in NYC would be coldest, earliest temperature on record.

The previous earliest record of reaching 22°F was Nov 13, 1873. The 21°F expected for NYC would be the coldest in 144 years. Further up Long Island, temperatures are expected in the teens. 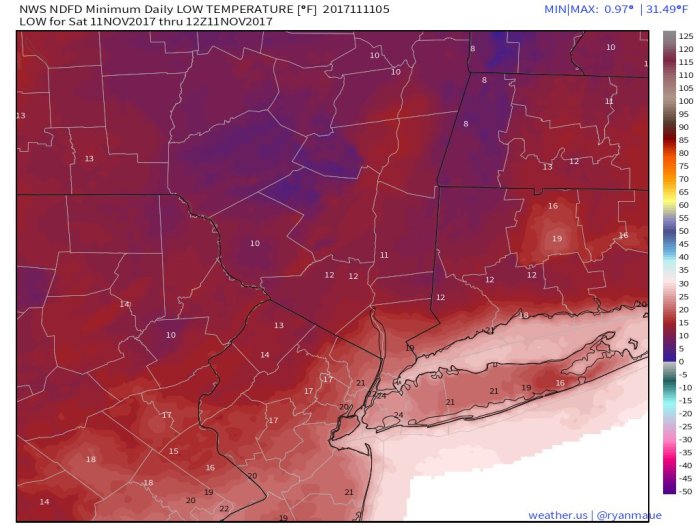 A record low temperature that lasted 103 years has already been set in Central Park according to the National Weather Service:

The rest of New York State will be even colder by morning, with temperatures in the teens to hovering near zero.

Rest of New York State will bottom out in teens or even close to 0°F at elevation. If that doesn't shock you, then you have ice in your veins or you're drunk. pic.twitter.com/Lwz4nagFQz

Two records for cold were broken in the last two days.

Record low temperatures were set at 5 of our 6 climate sites this morning. Temperatures will only rise into the mid to upper 30s this afternoon. pic.twitter.com/queX7mE4fY