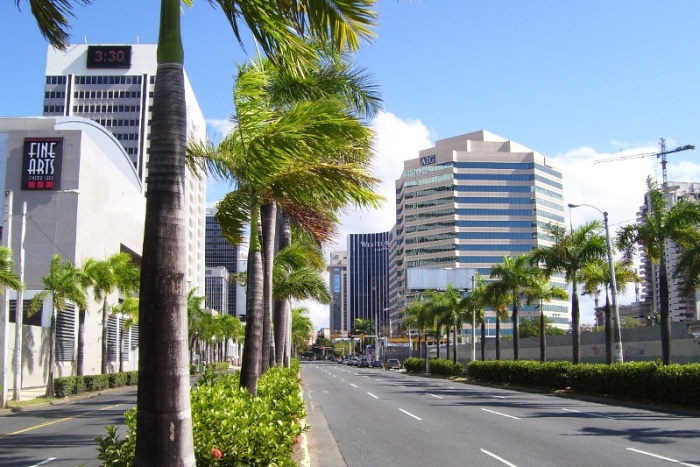 Hato Rey Milla de Oro. By Thief12/Carlo Giovannetti (talk) – I created this work entirely by myself. (Transferred from en.wikipedia to Commons by Thief12.), CC BY-SA 3.0, https://commons.wikimedia.org/w/index.php?curid=17819845

The Obama administration is siding with Speaker Rep. Paul Ryan (R-WI)56% on how to properly identify the Puerto Rico rescue legislation currently under consideration by the House of Representatives.

Conservative House members drew Ryan’s ire after describing the legislation as a “bailout bill” for Puerto Rico, something that the Speaker’s office has worked to tamp down.

White House Press Secretary Josh Earnest called for Congress to pass bipartisan legislation to assist Puerto Rico, allowing them to restructure their debt. He also joined Ryan’s effort to denounce any attempt to brand the bill as a bailout.

“Just to be clear, because there does appear to be some misinformation that’s being spread about this, this is not a bailout,” he said during the White House press briefing. “I’ve said many times the administration doesn’t support a bailout of Puerto Rico. We don’t. We have never and we don’t now.”

What went wrong? Part of the blame may lay with Puerto Rico Governor Luis Fortuño, who in 2010 embarked on a massive gamble, to reduce Puerto Rico’s dependence on fossil fuels, by embracing renewables.

“We need to aggressively encourage the development of renewable energy sources for the benefit of all that reside and work in Puerto Rico. Establishing the right public policy will be the anchor to make it happen,” said Governor Fortuno.

The renewables push attracted interest from American alternative energy businesses. But roll forward to 2015, and things in Puerto Rico, which derives a surprising amount of income from manufacturing, aren’t working out so well. Puerto Rico is still enthusiastic about green energy, but public debt is now described as a “crisis”.

Puerto Rico is facing a financial crisis, and their energy situation may have a lot to do with it. Puerto Rico has had debt problems with the island’s energy subsidiary PREPA, from which it obtains imported petroleum for electricity.

Electricity rates on the island are around twice as high as those on the U.S. mainland, according to Bloomberg. This comes out to $0.24 to $0.25 cents per kilowatt-hour (kWh), while the average on the mainland is around $0.12 per kWh. According to the Energy Information Association (EIA), in 2013, 55 percent of Puerto Rico’s electricity came from petroleum, 28 percent from natural gas, 16 percent from coal, and 1 percent from renewable energy.

A year ago, Puerto Rico Governor Alejandro Garcia Padilla made a pledge to decrease the cost of energy in Puerto Rico. However, the fact that Puerto Rico is an island doesn’t mean renewable energy is harder to produce — in fact, it may be the opposite.

“Islands often face high energy costs due to their generally small size and remoteness, making renewable energy an attractive option,” according to the American Wind Energy Association (AWEA). “Several other Caribbean islands have committed to start replacing diesel generators with renewable sources. A small Spanish island, the most remote of the Canary Islands off the coast of Morocco, has neared its goal of 100 percent renewable electricity.”

My question – why are President Obama, and Republican House Speaker Paul Ryan, so keen to push through this measure (don’t say bailout) to rescue what may be developing into yet another green financial disaster?

If you think I am wrong, and are keen to invest in Puerto Rico’s glowing green energy future, this website is a good place to start.

120 thoughts on “Green Puerto Rico "Not a Bailout" Rescue Package”