With all the chatter about rising temperatures and record hot years emanating from Australia’s Bureau of Meteorology (BoM), CSIRO, the Australian Academy of Science, hard-core professors and climate-clowns at the Climate Council, a series of hard-hitting reports are becoming available on www.bomwatch.com.au that investigate how under the guise of data homogenisation, a cabal of scientists within the BoM adjust Australia’s temperature records to produce trends that are unrelated to the true climate.

In a similar vein to activist organisation 350.org’s traditional view of power, Australia’s race-to-the-bottom net-zero pledge depends entirely on the single pillar of ACORN-SAT (Australian Climate Observations Reference Network – Surface Air Temperature). Unpicking ACORN-SAT, using robust, replicable methods has multiple benefits, including showing unequivocally that the models are wrong, and undermining the credibility of State of the Climate Reports and other propaganda published by CSIRO.

Figure 1. The power pyramid as envisaged by activist organisation 350.org “the organisation (they) can trust” (https://trainings.350.org/resource/understanding-people-power/).

Omitting the detail, which is in the reports, Blair Trewin, who developed the 112‑station ACORN-SAT dataset creates bogus trends by:

While data-fiddling should be viewed with great distain, it’s not the case for some, including Trewin, the BoM, CSIRO and professors and worker-ants who depend on money they get from the Australian Research Council to reshape our climate history.

For example, adding an emotive personal touch activist heatwave expert Dr Sarah Perkins-Kirkpatrick chief investigator on the ARC Centre of Excellence for Climate Extremes, told www.news.com.au on 20 November 2021 that as a mother, person, and human being she made the “extreme decision to move her family from western Sydney to Canberra, where the climate is much cooler for her daughters, aged 2 and 4”. (https://www.news.com.au/technology/environment/climate-change/family-moves-to-another-city-to-escape-atrocious-temperatures-due-to-climate-change/news-story/c9a4122d83bdaca3e15aed53d25cc599).

It comes with some surprise that previously, the same mother, person and human being promoted using use fake news, horror-stories and cli-fi to cause deep despair in the minds of vulnerable children and young adults, thinking about their future (https://theconversation.com/ can-cli-fi-actually-make-a-difference-a-climate-scientists-perspective-83033). Amid all the other stressors of growing-up, climate-porn pedalled by people they should be able to trust, is known to do real and lasting damage to vulnerable people and should be regarded as a form of child abuse.

It is also useful for folks to remember that despite the hype, the atmosphere is still 99.96% CO2-free, and discounting station moves, changes and tricks like spraying-out the grass, detailed BomWatch studies have found no warming in the climate at Carnarvon, Meekatharra, Marble Bar, Parafield, Amberley, Rutherglen, and many other places including at weather stations along the Great Barrier Reef.

For her part, as mother, person, and human being, Perkins-Kirkpatrick could encourage her girls to enjoy re-runs of Frozen while she objectively analysed datasets that underpin her irrational warming-fears using BomWatch protocols. She could start with the freely available statistical packages detailed in the Parafield case study and datasets linked to each report, then openly discuss the outcomes at www.bomwatch.com.au or here on WUWT.

Bomwatch brings scientific rigour to the study of Australian climate.
The alarmism that Dr Johnston discusses is strongly affecting national policies on CO2 reduction hence dynamite destruction of productive coal fired electricity stations.
There is a core of activists that currently enjoy the ear of government. They use radical methods like the Australian Academy of Sciences publishing academic papers demanding punishment for those who disagree with their view of science, which is easy to attack because the quality is poor.
Australia is in a dangerous mess, but people who know this are not being heard. They are being silenced. That is so, so wrong.
Geoff S

Is the land needed for other purposes, or is it a ploy to make sure there is no backsliding on the commitment to phase out coal? It appears that right now Germany is glad that they hadn’t destroyed their coal-burning power plants.

There is also a pilot plant to retrofit a former coal-burning power plant to use geothermal energy. Should that turn out to be successful, those responsible for destroying the existing steam generators are not only going to look foolish, but irresponsible. Is there something in the water in Australia that is lowering the IQ?

Clyde,
The indications that I have seen all point to physical destruction so complete that the plant cannot be used again. I have seen no mentions of the land being needed for other uses. They might exist but they are not publicised. Geoff S

As with all other homogenized temperature datasets, ACORN is a mess. Just look at the BOM treatment of the Rutherglen Ag Research station to see why.
And a lot of other Aussie alarming climate stuff is a mess, also. GBR being exhibit A. O’Leary’s sudden Eemian sea level rise, and Fabricius’ ocean acidification damaging Milne Bay corals, are both easily proven Aussie academic misconduct.

Seems other hyperventilating hyphenated aren’t exactly heeding the call dearie-
https://www.dailymail.co.uk/news/article-7692243/Mike-Cannon-Brookes-Fairwater-estate-named-Australias-best-mansion.html
Obviously doomed with the ice melt and rising seas but too busy cleaning up with all the Green pork going around methinks. Call me when these doomsters start fire-saling and heading for the Blue Mountains.

…
hint to self.. cannot drag and drop image !

The potential for serious damage to our national economy is increased when the suddenly mega-rich imagine that their ability to transfer $$$ from other pockets into their own ordains them with a social licence to pontificate on matters about which they no more than average. Or rather less, when it comes to professions like science and medicine.
Policy makers must learn to identify snake oil. Urgently.
Geoff S

Since policy makers are usually the snakes, snake oil promotion is in their best interest.

1
another ian
Reply to  sherro01

Time to apply this word again –

“noting or pertaining to a person who criticizes, judges, or gives advice outside the area of his or her expertise:”

After listing a number of the “devastating extreme weather events of 2022” Dr Sarah laments that “climate anxiety is a growing concern among Aussies, which can lead to feelings of worry, upset, anger, sadness, and distress, especially at this time of year”.
If true it is hardly surprising, after all as very vocal activist climate scientist specializing in extreme weather hyperbole isn’t that a predictable outcome of her efforts?
She does offer some therapy suggestions to help calm the climate jitters such as ‘thrifting, regifting or making something at home’ and ‘moving around on foot or by bike’. 🤣

Some of her much-quoted papers on heatwaves are cherry picked to commence in 1950.
When I do similar analysis for towns going back to as early as the 1860s, the patterns change and her conclusions are not supported.
She invokes more cherry picking, with made-up definitions of heatwaves that suit the meme.
Using simple definitions like the average Tmax over several consecutive days, there is very little heatwave trend in the Australian major city data.
Geoff S

“isn’t that a predictable outcome of her efforts?”

Canberra is much cooler in winter than western Sydney. Summer, not so much.

or she could have just moved a little west to Katoomba, which has a higher mean minimum and lower mean maximum (i.e. milder) than Canberra.

Its even warmer since they ploughed around the automatic weather station at Penrith Lakes and Badgerys Creek and established the Mt Boyce site atop a west-facing cliff …. and in Canberrra, after they installed the wind-profiler array, What was she thinking (or not)?

That’s interesting about Penrith Lakes, Bill. I was under the impression that the large body of water moderated winter minima and summer maxima there.

Australians must be very scared of global northern warming. Current temperature anomaly according to “climate reanalyzer”:

Geoff S,
Thanks for your continuing efforts to identify the increasing period of no warming in the UAH lower troposphere trends for Australia.
Ultimately it will become more difficult for alarmist climate scientists to ignore, try as they may.

Corrupt Temperature Data Mannipulators in Australia. If they didn’t distort the temperature trend, they wouldn’t have anything to talk about.

The written temperature record shows it was just as warm in the Early Twentieth Century as it is today. The written record shows today’s warmth is not unprecedented, as Alarmists claim.

The “hotter and hotter and hotter” computer-generated temperature trends and the “hottest year evah!” meme are all Big Lies meant to panic people over the benign gas CO2.

The Cabal of Corrupt Data Mannipulators are causing the people of the Western world great harm with their lies about the Earth’s climate and about CO2. Great harm, with no end in sight. If you are feeling the pain, this is who you have to thank: Liars and Scoundrels mannipulating reality for selfish purposes.

It looks like the cooling continues. UAH shows last month was 0.6C cooler than 2016: 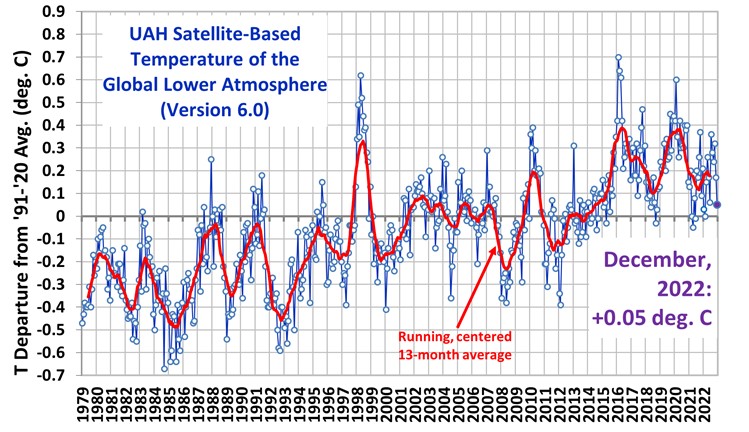 This is clearly a battle between science and politically convenient fantasy. Many labelled scientists are actually propagandists for the crooks spreading fantasy. Far too many people are willing to sell their integrity for profit.

This article is so ambiguously worded that I cannot make enough sense of it that I could explain to a climate alarmist just what is being alleged. Nor can I explain why they should think anything is wrong.
The first of the three points leaves me wondering:

The next point is even more obscure to me. I’ve not met the term comparator, which Google defines as a specialised high-gain differential amplifier. I infer you’re speaking of something else.

The third is equally obscure.

I boast of a good layman’s knowledge of science and statistics, and reasonable familiarity with climate discussions over the decades.
Sadly that doesn’t help me with this article. Could you please revisit it, and explain it in plain English?