German meteorologist Dominik Jung of wetter.net says, after having reported yesterday of -50°C in Oimjakon, Siberia: “-54°C were measured there this morning.”

“For early December, these are extremely low temperatures there, which are normally expected only at the end of December or beginning of January,” says Jung.

Moreover, Jung reports that all weather models are on an early winter course for Europe and that there is more winter than in the December months of the past 12 years.

“For the 3rd Advent, fresh snow is expected down to low altitudes. Winterly it goes on.”

There’s a real threat the extreme cold may spill over Europe, which is energy deprived. This could spell disaster. Let’s hope the model forecasts for more cold, like today’s GEM output of -16°C for Düsseldorf on December 14th, don’t turn into

They are dreaming about ‘net zero’ C over there.

20
sturmudgeon
Reply to  No one

I was in Thompson, Manitoba around 1959/1960, when it was just beginning to be “developed”, and I recall temps around minus 50 degrees… don’t recall whether that was F. or C. at that time in Canada… just that we had a LOT of truck trouble some mornings. Brrr is right.

7
Joel O’Bryan
Reply to  Bryan A

Where the eyes and ears deceive… and only the government paid scientists can see and hear for you. Welcome … to the Twilight Zone.

It seems like the most obvious question on “energy transition” was not even asked. How to heat with renewables?

Hopes and wishes in one hand, and crap in the other. See which one fills up first.
— Various attributions

They must be praying for a windy December and January, plus the fracking delivers US gas LNG tankers.

[Joe Bastardi enters the chat, licks finger and draws a 1 in the air]

Joe’s forecast does make me nervous, as does Joseph D’Aleo’s post about how northern hemisphere snow-cover is at the highest levels seen in 56 years, for this early in the season. The fresh snow somehow makes cold more extreme, and builds the massive high pressure systems that feed the worst arctic outbreaks. I have cut and ordered 8 cord of wood, just in case the deliveries of oil and propane stop

Temps have gone down, close the freezing at night, here in sunny Manchester UK but next to no wind chill. So, no windmills to save us and our 16 hours of night doesn’t help with the solar. lol

The other 8 hours with sunlight aren’t doing a lot for solar at that latitude either.

Will the grid survive the World Cup Quarter Final surge on Saturday evening? Likely to be larger than last night’s.

I’ve often wondered how much ice a wind turbine blade will bear before it snaps off, looks like we might find out fairly soon as freezing fog rolls over Europe.

If it’s so cold that your mercury thermometer freezes, perhaps you have bigger problems than trying to track down an ethanol thermometer 🙂

OK, it’s looks like a cold and deadly winter for the northern hemisphere of this planet. How do we insure that the guilty freeze to death first? What…they are already flying south to vacation in equatorial regions? That’s not fair.

Not just cold from Siberia being blocked; check out the temperatures for central Norway which are -15, -16, -17 , -18 daytime and snow has been falling hugely with snow forecast all this week. Thuringia has had a lot of snow we have been told….even forecast for middle England later this week.

“How do we insure that the guilty freeze to death first?”

Unfortunately, they will almost certainly be the last to suffer.

Of course, some evil person could put sugar in the fuel?

They probably have quite a lot of wood furniture that would burn well since they aren’t using it while down south.

Ron,
They’re not going to freeze, but perhaps we can introduce a new mantra for the energy impoverished: Burn the rich (climate alarmists!)

I certainly don’t wish for a cold catastrophe since innocent people will die, but also because the grifters already have their cover story in place. “It’s all because of Putin and proves the urgency of building more (bird choppers)”

heck, dontcha know, extreme cold is due to global warming! I hear that all the time here in Taxachusetts

I sometimes call it Corruptachusetts because it’s very corrupt. Somebody should write a long book on this subject. A few years ago – it was discovered that the state cops on the Turnpike were (most of them) claiming to have worked far more hours than they really did- and the bosses too- and nobody noticed! The state has auditors and they didn’t notice either. Many were reporting working well over 100 hours per week and earning a quarter million bucks/year or more- then retiring at the typical state pension rate of 80%. When this finally came out- a few of the lower level cops got slammed but the higher ups got away with it, so far.

Reminds me of back in ’73 when I graduated from the state university with a degree in forestry. I still had an ideal view of state government. I had hoped to get a state job. I called the state forestry office in Boston and ask the lady to send me an application. She shocked me when she said, “no, I can’t do that- it doesn’t work that way- you HAVE to talk to a state politician- who might be able to help you”. I was floored when I heard that- so much for “civil service system”. And so much for my idealism.

The Polar Vortex Explained in 2 Minutes

A growing body of evidence suggests that kind of extreme cold being
experienced … is a pattern we can expect to see with increasing
frequency as global warming continues.

Hotter is colder, wetter is dryer, lighter is darker, windier is stiller, life is death.

Currently in London it’s around 6C, so it was with some amusement that I read about the latest JSO protest…

“Just Stop Oil activists tucked themselves into a Harrods display bed as part of a national day of action on fuel poverty in the UK on Saturday.
Footage of the “warm up” demonstrations also showed security guards confronting protesters lying on sofas inside the shop in Knightsbridge, London.

As do we all. The difference is they believe insulation will warm houses up… 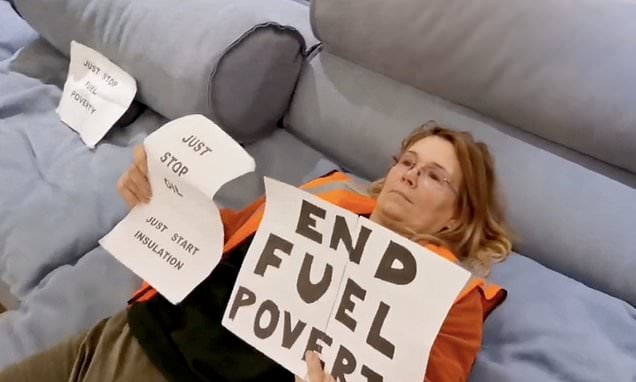 Give them a sponsored 6 months in Siberia, they can tell us all how it works there.

Where are the people with the End Fuel Poverty, Burn Coal!! Signs?

They were cancelled. Didn’t you hear?

“Give them a sponsored 6 months in Siberia, they can tell us all how it works there.”

What!? They can sleep on very expensive beds owned and maintained by others?

Hades, send them into the forests where they can share beds of the bears? Perhaps Kodiak Island? Or better yet, deep in the Yamal Forest.

At least it is a dry cold.

Wow, minus 54C makes our minus 8C expected here in central U.K. seem tropical.
No doubt the BBC will describe our pre Christmas chill as exactly that, tropical!

I saw an old episode of Rising Damp the other day and blow me, there were references to the global cooling scare in it. So that was…. 1974

10
Bryan A
Reply to  Rod Evans

You’re 46C warmer than Siberia, must be those Warmer Winters GW/CC is supposed to bring about

So another horseman of the apocalypse is likely to be joining that of war in Europe.

In nautical terms a plate with holes in it of the proper diameter to hold cannon balls was a Monkey. The Monkey held the balls off the wooden deck and was what held the bottom rows of cannon balls securely in place so the rest of the balls could be stacked upon them to form a pyramid of ready ammunition near the guns in which they would be used.

The magazine where the powder was stored was usually down just above the keel of the ship in a room below the water line that on war ships generally had lead curtains. The young boys which transported the powder, generally in canvas bags, from the magazine to the guns, were called “Powder Monkeys”

In extreme cold the contraction was so great the balls of the bottom row could roll around on the deck in their holes destabilizing the pyramid enough that on the bucking and rolling deck in rough seas balls would fall off and get loose on the deck.

It was no laughing matter.

And so Australia was never colonised….

Until it became a prison colony,

A sigh of relief today knowing the Zombie apocalypse will remain frozen in the ice on a cold Monday for at least another day in the arctic. LOL

Ja. Ja.
Maybe the Eddy cycle is coming to an end?

You were heading to Siberia?

getting close to records territory for december.

Back home in Ural it’s a balmy -8C on those days.

funny thing nobody is buying snow tyres, I predict a panic!

“funny thing nobody is buying snow tyres, I predict a panic!”

I am! I just bought a 1995 Dodge 3/4 ton pickup. Paid $3,000 for it. It has the 10 cylinder engine in it and hardly any rust above or below. 138,000 mi. Thirty gallon tank. Everything works except the radio which has a ground short and can be easily fixed. That truck has a frame with members that are at least 1/6″ thicker steel than you will find on the trucks the major manufactures are making now. It’s a Hoss! I’m putting 10 ply snow tires on it.