According to the Innovative Genomics Institute, Genetically modifying Rice to make it more vigorous with deeper roots, could trap more CO2.

Gene-edited rice might be better at trapping carbon dioxide

Can gene-editing technology CRISPR create new crops that help fight climate change as they grow? That’s what a group of researchers hopes to do with $11 million in funding from the Chan Zuckerberg Initiative. The funding will go toward efforts to enhance plants — starting with rice — and soil so that they’re better at trapping carbon dioxide. The effort, which was announced last week, is being led by the Innovative Genomics Institute, which was founded by Nobel laureate and co-inventor of CRISPR Jennifer Doudna.

CRISPR can be used to make precise changes in a plant’s genome to produce desired traits. There are three targets for gene editing in IGI’s carbon removal mission. It starts with trying to make photosynthesis more efficient in plants so that they’re even better at capturing as much CO2 as possible. Second, IGI is interested in developing crops with longer roots. Plants transfer carbon into the soil through their roots (as well as from the rest of their bodies when they die). Longer roots can deposit the carbon deeper into the soil so that it isn’t so easily released into the atmosphere again. A similar effort to influence plants’ genes and develop crops with more robust roots is underway at the Salk Institute for Biological Studies, which received $30 million from the Bezos Earth Fund in 2020.

That brings us to the third arm of IGI’s research: boosting the soil’s capacity to store, rather than release, greenhouse gasses. Soil doesn’t typically hold onto carbon for very long. It escapes back into the atmosphere through soil microbes’ respiration as they break down plant matter. And techniques used in modern agriculture, like tilling, accelerate this process and allow soil to lose more of its carbon. One potential outcome of IGI’s CRISPR research, according to Ringeisen, is a product that could be added to the dirt to nurture a soil microbiome that holds onto carbon longer.

Frankly the biggest issue would be convincing farmers to grow the new GM rice.

Farmers in most places are eager adopters of new GM varieties which increase yield and profit, but will deeper roots and more carbon trapping ability help boost yield? Unless the improved photosynthetic ability more than compensates for having to grow more useless tissue, like a root system which is deeper than necessary to help trap more carbon, the new CRISPR climate rice will end up staying on the shelf.

There might be some small gains from deeper roots decreasing how many get knocked over by wind. But I think evolution alone would have gotten the optimum pretty close already.

What a pathetic and obvious effort to jump on the nonsensical, but hugely lucrative, “CO2 is evil” gravy train.

“Rice-a-Roni— the San Francisco Treat”, an advertising jingle from 1962. Goddammit, now I can’t stop thinking about it.

Oh thanks, Ron. Now I’ve got it stuck in my head too.

And for those who don’t know what we’re talking about:
https://www.youtube.com/watch?v=yzOR_Fal_SY

Thanks, Bob! (I think)
I thought the “ding-ding” followed every line.
(Maybe I’m remembering a later commercial?)
PS My older brother had to use a colostomy bag a few years ago. (He’s fine now.)
I sent him what I remembered of the original lyrics from the first “Baggies” commercial:
“Don’t cr@p it. Bag it. In Baggies.
New tear off plastic bags on roll…”
(Well, sort of the original lyrics…)

Another thing to make Greenpeace activists head explode – to “save the world” they have to not only embrace nuclear power but now also GMO foods!

What’s next, “Whale oil to replace petroleum, for the sake of the children!”

I’m by no means expert on this, but I think nitrogen fixation would be a better goal. Most nitrogen-fixing plants are legumes (beans, peas, clover, alfalfa), but it’s my understanding that one other C3 grass does fix its own nitrogen: sugarcane. If they could teach that trick to rice, it would help reduce dependence on N fertilization, and probably also improve yields.

I do worry that some misguided, climate-obsessed, plant biologist will create C4 trees. That would be very, Very Bad.

One of the great, extraordinary blessings of our Earth is the fact that all trees are C3 plants. It is very, very important for the very long term future of the Earth’s ecosystems that that not change.

C4 plants are grasses, which means that they do not sequester much carbon. C4 grasses can continue to suck CO2 out out of the air even when the CO2 concentration is very low, but then they die and rot, and release nearly all of that carbon back into the atmosphere within a year or few. 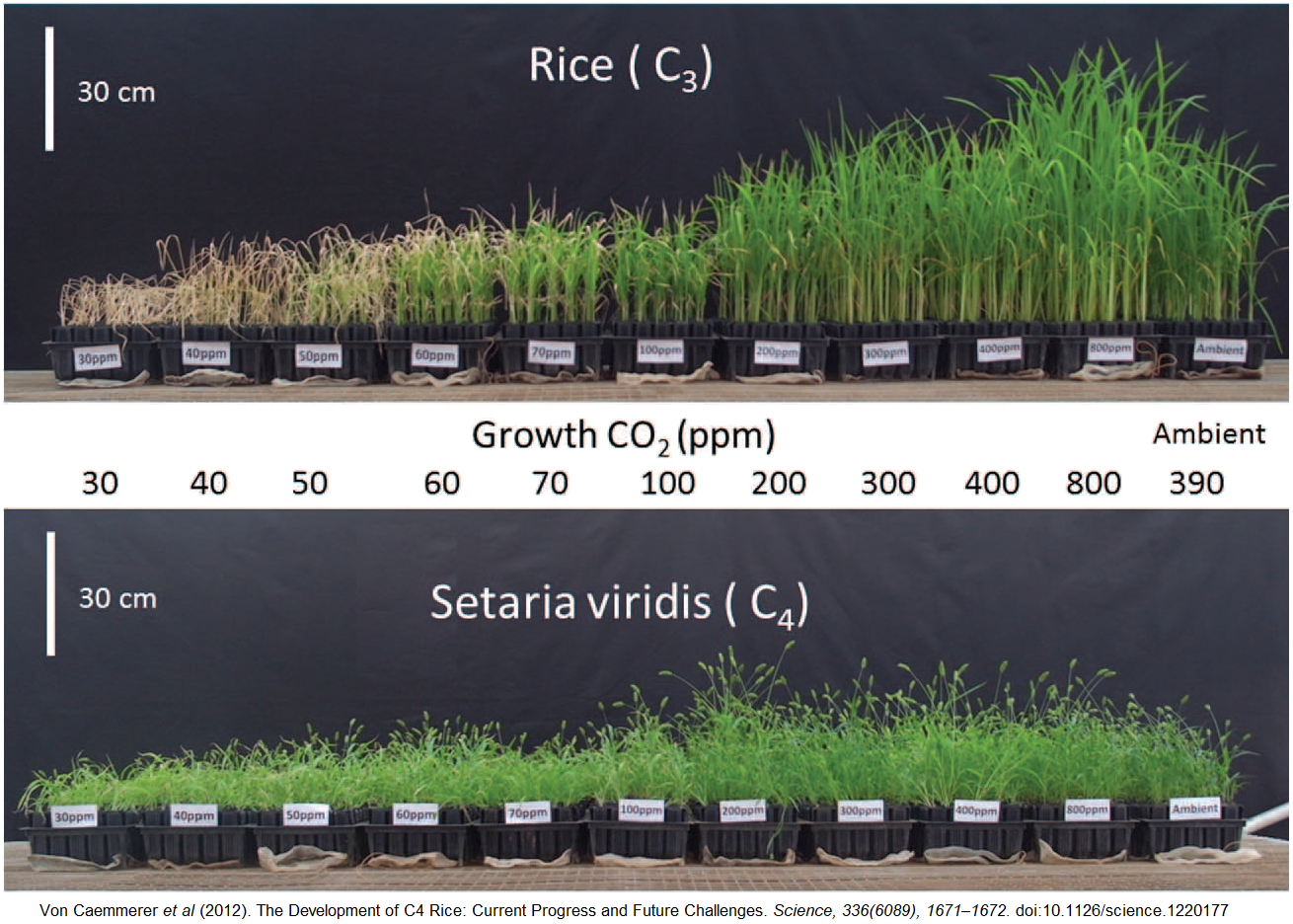 Trees are different. They have the potential to sequester CO2 for many decades.

Fortunately, all trees are C3. That prevents them from drawing down CO2 levels in the atmosphere to extremely low levels. When CO2 levels get too low, C3 plants cease removing CO2 from the air.

If there were C4 trees, they could potentially sequester so much carbon from the air that they would drive CO2 levels too low for C3 plants to survive. That would cause a truly catastrophic extinction event, potentially wiping out not only most plant species, but also the animals which depend on those plants.

So if you ever encounter a plant geneticist trying to engineer C4 trees, STOP HIM!

That longer tree life only creates a longer lead time, which was over with millions of years ago. It makes no difference once the cycle has passed the lead time.

I have wondered for years why there has not been an effort to genetically modify grain plants so they are able to have the same symbiotic relationship with nitrogen fixing bacteria that the bean plants have. You could eliminate the cost of nitrogen fertilizer.

A friend who is a plant geneticist, Deshpal Verma, spent a number of years trying just this. His publications run to 11 pages in GoogleScholar. Flicking through them the message is that there are multiple complex genes involved in symbiosis in legumes.

The only known C4 trees are Hawaiian euphorbias,
https://www.ncbi.nlm.nih.gov/pmc/articles/PMC7410182/

Thank you, George, for educating me!!!

Thanks for the info! In the course of investigating nitrogen fixation & sugarcane, which I had never
heard of before, they listed sugarcane as a warm C4 plant like corn & sorghum. Your pictures really
show the difference between how C3 & C4 plants react to CO2 levels. I had never seen that before!

Thank you, Old Man, for educating me!!! I recalled (incorrectly) that sugarcane was a C3 grass. Knowing that it is C4 makes it even more unusual. Is it the only nitrogen-fixing C4 plant?

(I don’t have the means to display a labeled triangle.)
To grow:
Plants breath CO2.
Plants need nutrients. (Including Nitrogen)
Plants need the dreaded DHMO.

So, we need someone to genetically engineer a plant that will “exhale”, instead of Oxygen, Nitrous Oxide!
We’ll all still die, as they insist we will in a few years, but we’ll be much happier as we go.

We live in a CO2 starved world. Solves a non-problem.

And creates a worse problem

Genetically modified rice that can perhaps, maybe do a tiny little bit to trap CO2? Sure. Go for it.

Everything has climate change bolted on to it. A waste of time, effort and money.

>The primary one being that folks actually eat rice by choice.
they don’t

But what about Methane production from this new variety of Rice.

until its eaten then … well who cares right …

What will the hypocrites at Greenpeace and other anti GM crowds say?
Not that I really care but I expect a big stink so they can raise more funds.

Sorry, but as a rule the climate/insane are also GMO/insane and will view this development as just another step on the path to destruction, therefor they will fight this tooth and nail.

who cares? CO2 concentration has no influence in temperature! everyone knows that!

“hope I die before I grow old” – The Who, My Generation

The same guys who reject GM products like golden rice, that actually helps people, are now eager to get farmers to start using this GM product because it helps the environment.

And then, it gets eaten.

The growth of rice under a CO2 concentration of 800 ppm. looks particularly good. We should be aiming to get CO2 up to 800 ppm.

I’m waiting for someone to develop a grain of rice the size of a dinner roll.

It’s too much of a hassle dealing with those tiny little grains. And it’s too easy to spill a few and oopsie! off they go, never to be seen again except by mice.

Who gives a toss about how much or how little CO2 rice sequesters? I want a grain that needs a knife and fork to tackle it.

Why isn’t anyone working on this?

What’s the point, as all CO2 will endup back in an air. To capture CO2 permamently it needs to be chemically bonded and stored (like limestone).

Farmers don’t seem to understand that tilling and over-tilling are killing the soil. So, they won’t grasp this at all.

It’s like the Buck Owens song I’v Got a Tiger by the tail. They have CO2 by the tail and can’t let go. In the song Buck Owens likes it because the tiger is a woman. In the case of CO2, they can’t let go because so much is invested in it. Good song.

GMO will saves us only to kill us?

The whole approach is a very very temporary “fix” for a non-problem….they are quite aware that “Soil doesn’t typically hold onto carbon for very long.” Tree roots may be effective on a decadal scale….rise roots, in flooded paddy agriculture? Maybe an annual or bi-annual scale. But then, there is a lot of rice being grown.

Any strategy that is aimed to fix more CO2 is stupid and not based on real science. No gas at any concentration can warm the climate in any way.

Making a rice that grows more quickly because of higher CO2 is great.

Decrease in CO2 will reduced plant life. Plants breath CO2 and give off oxygen. Climate does change. Been going on since the beginning. Our elite idiots want to harm everybody, including the plants with their war on CO2. It’s a dangerous scam.

The benefit of GMO rice is more food and, if we use the vitamin A producing rice, healthier children and less early mortality. We don’t need our crops to lower CO2 as any effects we can measure of rising CO2 in atmosphere are positive.

Oh no, GMO rice! It will never be accepted by the true believers no matter what kinds of benefits are touted.

Sri Lanka Food Shortages Due to Fertilizer Ban, (Not Putin)

Claim: “I led the US lawsuit against big tobacco … Big oil is next”

Putting Coal Into the African Perspective