A protein called phytochrome B, which can sense light and temperature, triggers plant growth and controls flowering time. How it does so is not fully understood.

In a paper published in Nature Communications, a group of cell biologists led by Meng Chen, a professor of botany and plant sciences at the University of California, Riverside, reveal the phytochrome B molecule has unexpected dynamics activated by temperature, and behaves differently depending on the temperature and type of light.

As climate change warms the world, crop growth patterns and flowering times will change. A better understanding of how phytochromes regulate the seasonal rhythms of plant growth will help scientists develop crops for optimal growth under the Earth’s new climate and might even shed light on cancer in animals.

In shade phytochromes are less active, absorbing red. This “off” form releases the inhibition of stem growth, so plants grow taller in shade to compete with other plants for more sunlight.

Changes in light alter the size and number of all foci. Chen’s group has now shown temperature alters individual foci.

His group examined the behavior of cells exposed to different temperature and light conditions from the leaves and stems of Arabidopsis thaliana, a plant used as a standard model in botany science. The goal was to monitor how photobodies change in response to temperature.

The current understanding is that phytochromes form photobodies only in the “on” state.

Chen and co-authors Joseph Hahm, Keunhwa Kim, and Yongjian Qiu, members of Chen’s research group at UC Riverside, expected increasing the temperature would have a similar effect to shade — it would switch the phytochromes “off.” They thought the photobodies would disappear, as in shade.

The results were completely unexpected.

“We found that a subset of thermostable photobodies can persist even in warm temperatures,” Chen said. “The rest of the foci would disappear at each stage of lower temperature. Before we thought all the foci were the same, but now we know they are all different.”

The study also showed phytochrome B reacts to temperature from two different locations on the molecule. The first part senses temperature; the second part forms foci. Foci formed by this second location are insensitive to temperature. This shows light and temperature are sensed by the same part of the molecule but result in different behaviors.

“Photobodies are large, dynamic protein complexes. Our results suggest that each of them could have a different composition,” Chen said. “What we think is that the unique composition of individual photobodies make them react to temperature differently. Future studies on understanding the unique features of each photobody will likely uncover the underlying mechanisms of temperature sensing and the regulation of temperature-responsive gene expression in plants.”

In addition to helping develop plants that will thrive in a warming world, this work could help scientists learn more about cancer in animals. Proteins in animal cells also form foci related in some way to cancer, but their role in gene expression and regulation is unknown.

The University of California, Riverside (http://www.ucr.edu) is a doctoral research university, a living laboratory for groundbreaking exploration of issues critical to Inland Southern California, the state and communities around the world. Reflecting California’s diverse culture, UCR’s enrollment is more than 24,000 students. The campus opened a medical school in 2013 and has reached the heart of the Coachella Valley by way of the UCR Palm Desert Center. The campus has an annual statewide economic impact of almost $2 billion.

It looks like plant phytochromes are both smarter and more honest that Prof. M. Mann. Plants adjust to CAGW nonsense, who knew? Nothing to worry about!

“The results were completely unexpected” pretty much says it all. I guess we don’t know everything and science isn’t really settled.

In case of warming because of climatechange, plants grow in different rates and are able to adapt and “we” know now better why, so what ? CC has nothing to do with the result of the study. Buzz word for better funding 😀
As far as they grow, it’s ok.

No, both are visible ranges of red. Chlorophyll only absorbs light in a small number of quite tight frequency ranges, including 662 and 642 nm in the red range.

Ron
Trust that a”geo” will come up with the practical comment.

A nice read for a battle-hardened sceptic! I knew plants had the ability to adjust for weather factors from experience, and now I know a bit more.

Having worked on geological surveys in Canada and Africa and mining exploration in the same, plus western US and Brazil, I take pleasure in observing and asking about interesting things I come across re flora and fauna of a region.

I also bought a farm in Eastern Ontario when my large family was young as I felt I needed a buffer from some of the temptations available to the kids in the city at the time. It takes 3 years to learn the basics of operating a mixed farm – sheep, dairy cow, pigs, chickens, horse, and a variety of market garden plants and feed crops – the planting, care, harvesting, the raising and finishing, the giving needles with a variety of medications, etc.

Some examples of plant adaptaions I ‘discovered’. a) in a hot dry spell, corn straightens out it its leaves like swords pointing upward, each forming a trough aimed down at the stalk. The early morning dew forms and runs down these troughs and you can see a wet ring around the plant at the root. When it rains, the leaves widen out and arc away from the stalk, repelling a lot of the water. b) Cabbage under drought, unfurls its outer big leaves at night and these bend back like like palms of hands collecting significant “cups” of dew that formed on these leaves and upper parts of the plant. When the sun clears the horizon, the cups raise upward dumping their loads of precious water at the roots.

c) In “Newfoundland and Labrador” (that folks is the official moniker of this province), there is a prolific berry called bakeapples – a single stalk berry, about the size of a raspberry 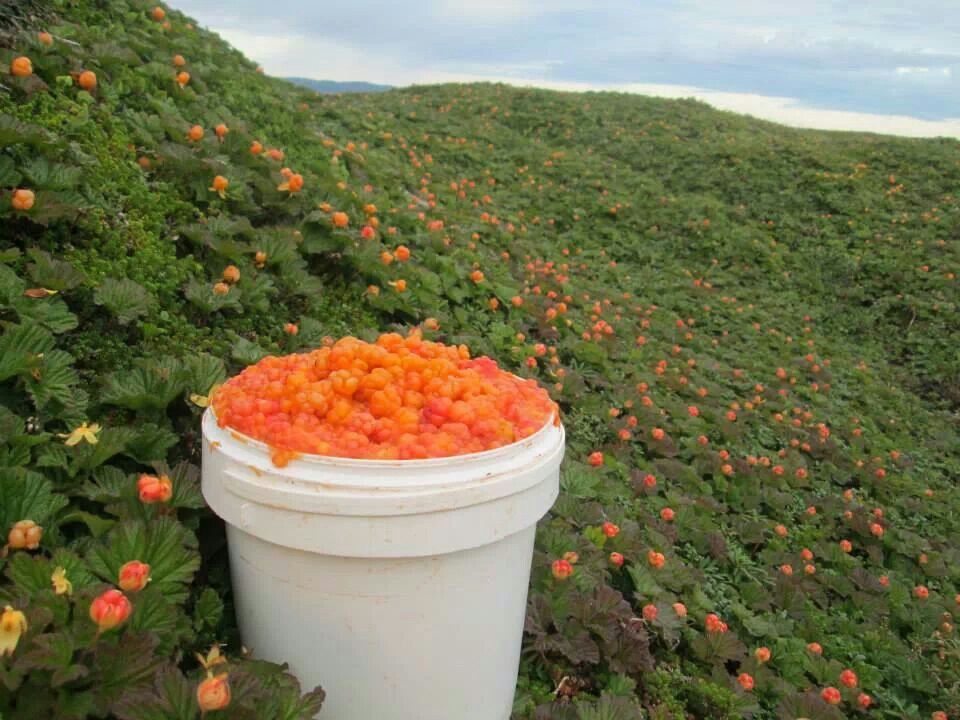 When on a project in northern Saskatchewan, in a glade in the woods, I came across a brownish orange berrythat was unmistakably a bakeapple, but it was 2 inches (5cm) in diameter! d) the Saskatoon berry looks very much like a blueberry, but it grows on a bushy shrub 6 feet or more tall (2m+) in Saskatchewan and Manitoba,

only 6 inches to a foot tall in the foothills of Alberta, and a tree about 30ft (9-10m) high with lovely blue-gray smooth bark on a 2″- 4″ main trunk which I found on my fenceline ont the Ontario farm.

I have noticed that water funnelling effect in other plants too. We grow through plastic mulch to control the weeds and both cucumbers and squash funnel water towards the opening in the plastic. I will look more closely at the corn. I suspect there are others too. Nice observation.

This reminds me of how different enzymes are active at different temperatures when you’re making beer. link

As I recall from a plant physiology class in the mid-1960s, we understood that the growth response in some plants was light sensitive, and in other species was temperature sensitive. This study simply explains the mechanisms the controls the temperature response. The study is very beneficial in explaining the response of something we already knew.

Yes, a few years ago there was a post here about how forests moderated their temperature. This provides the detection mechanism.

I recall something similar from high school biology lessons, that in some trees length of day rather than temperature triggered events like leaf budding in spring and leaf dropping in autumn.

And I wouldn’t be surprised that after a few generations of higher or lower temperature the relationships expressed by the phytochromes would also change.
Umm, there’s a word for that, oh yeah – evolution!

“Plants are more adaptable than climate scientists”…… Hmmmm.
Is anybody in the least surprised by that finding?

The magical incantation, to be expected in any EurekAlert! article, is “In a warming world…”

This justifies the inevitable “more research is needed” (send money).

Well, their hypothesis was completely wrong, but it seems (counter-intuitively) that they are changing their hypothesis rather than the data as would be the accepted practice. They failed to demonstrate catastrophic effects of tiny temperature changes. No funding for you losers!

Photo-bodies have a C-domain which in the absence of light assumes an ordered structure in relation with the photo-body’s light sensing domains which are folded. When light is sensed the C-domain structurally undergoes loss of it’s passive order & it’s array with the light sensing domains change. Then photo-bodies become involved with cascades of interaction with different transducers of gene expression & via RNA binding proteins brought into play influences regulatory function after gene expression.

In direct sunlight, such as in open fields, phytochromes switch “on,” absorbing far-red light. This active form inhibits stem elongation, which limits how tall plants in direct sunlight can grow.

In shade phytochromes are less active, absorbing red. This “off” form releases the inhibition of stem growth, so plants grow taller in shade to compete with other plants for more sunlight.

Possibly important research and adds to our knowledge but would the ‘conclusions’ based on laboratory results be very different to real life conditions?