A colorful surface forecast map by the 12Z GFS for Saturday evening depicting a multi-hazard event with significant snow (blue) and ice (purple, pink) on the cold side of a powerful storm system and heavy rain (green, yellow) on the warm side where there will be a severe weather threat as well. Map courtesy NOAA/WPC, tropicaltidbits.com

A major storm is going to become a multi-hazard event for much of the eastern half of the nation during the next few days. The storm will begin to unfold on Friday in the south-central US and then trek northeast to a position near the Great Lakes by Saturday evening and then over New England on Sunday.  Heavy rain and severe weather is likely to take place south and east of the storm track and significant snow and ice is likely to its north and west. The impact in the I-95 corridor will be to bring unusually warm conditions this weekend with highs generally in the 60’s and there will be some rainfall, stiff winds, and perhaps a heavy thunderstorm or two.

There is likely to be a news making weather event over the next few days as a powerful storm system will impact a wide part of the eastern half of the nation.  Surface low pressure will begin to form over Texas tomorrow night and then intensify as it pushes northeast on Saturday towards the Great Lakes and then it’ll slide into New England on Sunday.  The upper-level wave of energy that will play a key role in the formation of this storm is now moving over California and heading southeast.  By early Friday evening, there is likely to be a deep upper-level trough of low pressure near the New Mexico/Texas border region and this potent system will push to the northeast from there as we begin the weekend.

Strong support in the upper atmosphere (blue region) will help to spawn a strong system later tomorrow that will intensify on Saturday as it treks to the northeast. At the same time, strong upper-level ridging will develop along the eastern seaboard contributing to a major warm up in the I-95 corridor. Map courtesy NOAA, tropicaltidbits.com

On the warm side of the storm, heavy rain is likely and there can be a widespread severe weather outbreak from later tomorrow into Saturday night.  Several key parameters will be coming together for this potential severe weather outbreak which will include the possibility of tornadoes.  Low-level moisture will increase markedly on Friday in the southern US and this will combine with the negatively-tilted upper-level trough, deepening surface low pressure, and strong winds in the lower and middle parts of the atmosphere.

A severe weather threat will develop on Friday in the south-central US and then extend to the southeast US on Saturday with strong storms possible all the way into the Mid-Atlantic by Saturday night; maps courtesy NOAA/SPC

On the cold side of the storm, significant snow and ice is likely to fall in parts of the Midwest, Great Lakes and Northeast US.  The warm up that intensifies in the eastern US this weekend will back off some early next week, but much of next week will remain well above normal for this time of year. There are some signs, however, for an overall pattern change to colder in the eastern US in about a week to ten days, but there will be quite a bit of warmth (and rain) to get through before that potential cool down.

No snow on the ground just north of Milwaukee this January 9th 2020 and it’s been that way for some time. I’ve taken the precaution of getting the snowblower ready for the predicted storm. It is winter after all, and in my neck of the woods snow is a regular occurrence on an annual basis.

JUST north of Milwaukee. Washington Island, farther north, we are ahead of long term average snowfall but in six inch and 12 inch dumps. Snow cover is about 100% at the moment from the previous dump.

I shovel 2,000 square feet by hand and will probably wear-out this years shovel for the weight of snow shoveled wearing the wear-side of the blade faster than ever before. I try to shovel a little bit frequently and an inch or two does not appreciably wear it or me.

I’m resting today in preparation for tomorrow’s snow event. I may salt the driveway so that the tire-track pressure ice releases more easily.

Funny, Steve, snowcover here in west MD but not in your area.

Local stations in the St Louis area have called for snow on Saturday, until today. Now ALL the weather sites show only heavy rain, winds, flooding, etc. Also warmer temps. It looks like a big storm, alright, but, snow? ICE?
We’ll see.

No no no. It’s climate. There are no weather events, only climate events.

Right, Jeff, and the Climate Change headline will be “Major warm up in the I95 Corridor” without any mention of the snow weather event.

Anything that seems warm is Climate.

Anything that seems cold is Weather.

So if you live up in Montana, be sure to button up your coat because it’s Weather outside.

No! When it’s cold that means it’s to hot!

Been watching it develop here:
https://climatereanalyzer.org/wx/DailySummary/#t2

That big purple blob of “Barney” weather is nasty and coming our way. Next week I get daily “highs” of -20C to -25C. Get yer woolies ready folks.

From the article: “will combine with the negatively-tilted upper-level trough”

What does “negatively-tilted” mean in this context?

What does “negatively-tilted” mean in this context?

IIRC, it means a jetstream blowing alittle west of due north instead of the usual northeast direction, and that orientation can bring up alot of moisture.

“What does “negatively-tilted” mean in this context?”

Thanks for that info, I appreciate it.

NOAA’s IT guys get a big thumb’s down right now.

No Nexrad radar anywhere on-line at 1/10/2020 04:40 UTC. Been that way for several hours now.
Not even the local NexRad sites are online.
Down: https://radar.weather.gov/Conus/full.php

NOAA/NWS – your IT sucks.

Joel,
With respect, NexRad radar is tuned to detect liquid water drops, on a dbZ scale, in real time. It’s not a model forecast, so it is showing active convection storms at current time. Will not show typical stratus cloud layers or wind conditions if there is no liquid water involved.

To see a detail animation of what is coming, I like Windy.com and it “rain/thunder” forecast, which can also display pressure isolines and rain accumulation. Just push the play button to start the animation. Forecast based on ECMWF model, you can also select GFS.

Heavy accumulation of rain seems to start in Oklahoma on Friday, then spreads eastward from Gulf to Ohio by Saturday. Diminishing Sunday onward.

I think he means the site isn’t reporting anything, not that there’s anything wrong with the radar.

You are right, I misread. Sorry about that. I tried it this morning and it was working fine. But was not showing much significant weather in the Southwest.

It may not be a NOAA/NWS IT problem, they are pretty reliable for annotating outages (maintenance etc) in the “Radar Status Message” section at the top of the page.

Now the Oklahoma radars are starting to show heavy precipitation exactly where ECMWF predicted it.

Yes, we have had about six tornado warnings in Eastern Oklahoma so far today, one tornado was located about a mile or two to my east but moved on off to the northeast. None of the tornadoes so far have been strong. The meterorologists are saying they are not seeing any debris being picked up off the ground so we don’t know if they are touching down or not.

Most of the warm front is almost out of my area with much colder weather coming in right behind. We are about 60F right now but will be down in the 30’s by morning.

People east of us should be on the lookout for tornadoes as it’s pretty warm there, too.

Negatively tilted means the MSM want you to be scared by it, from my view. 😉

Pop,
‘Negative tilt’ is meteorologist talk, not scary MSM propaganda. Negative tilt is a useful index for predicting bad weather.
It means that angle of the bifurcation line through a low-pressure trough is less than zero. Normally troughs extend along meridians, so the angle is zero. A negative-tilt means that the nose of the trough is slanted eastward, so the bifurcation lines leans back westward, creating a negative tilt.

Please send the rain to Australia.

Heading to Disney World in Orlando this Friday morning. Will be there through Sunday afternoon with my 5 year old Granddaughter. Hoping the front slows a little. At least the special activities for the little one are all scheduled for today and tomorrow.

In three days there will be an unusual drop in temperature on the northwest coast. 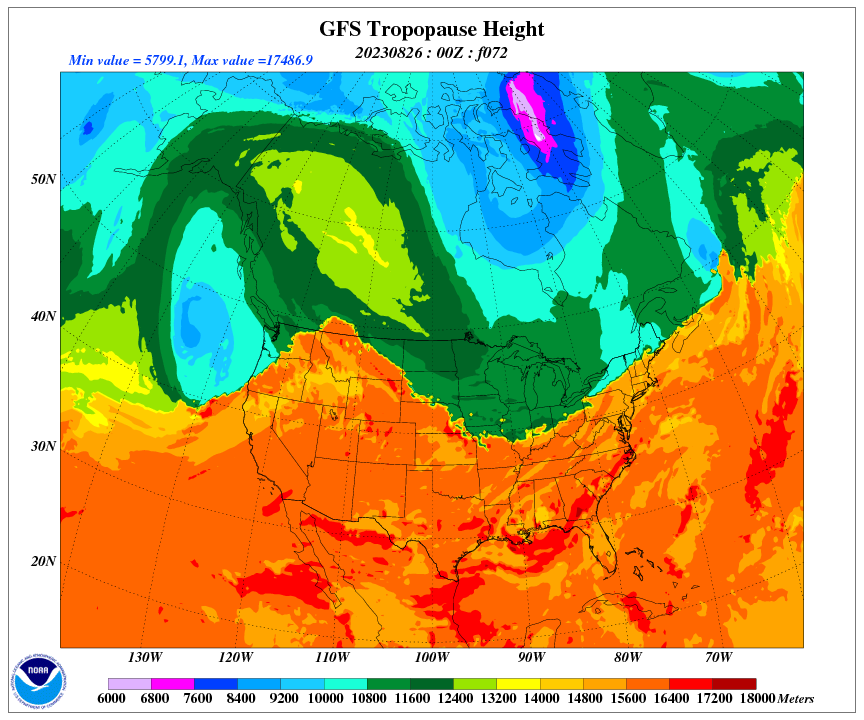 Forecast by NWS for my kingdom is 30s to 40s, slop (ice, snow, rain) precipitation, a possible thin layer of ice on things but with mid-30s it might not last, and two overnight temps below the freeze line. Good thing I made a nice pot of soup and stocked up on ice cream.

From the sound of the article, it suddenly peters out at the Canadian border. Whew!

It’s definitely weird seeing a weather forecast here in Cincinnati for temperatures in the 70s in January, especially considering the lows were in the 20s just a few days ago. I’ll take 70s and rainy any day over 20s and dry.

The current sunspot number is SN11, with two SC25 spots, one official and one unofficial:
http://www.solen.info/solar/#Active_solar_regions

Who will claim ‘solar activity’ is now heating up the Earth?

Ice-storms are the worst. Fortunately this storm is going west of my mid-Appalachian location. Joe Bastardi says the storm activity in the central/east US is going to be very active for the rest of the winter.

Looks like 23F and cloudy for the Packers vs Seahawks NFC playoff football game, at Lambeau Field in Green Bay Wisconsin Sunday 1/12. Snow is forecast for Saturday and a call has been put out for citizens to come to Lambeau Field at 6 am Sunday morning to help shovel out the stadium seating before the game. This a normal civic participation ‘thing’ in Green Bay and usually well supported. The Green Bay Packers are the only NFL team owned by the citizens of the State, not a single wealthy individual.
Go Pack Go!

So where are the fingerprints of human activity on this one?

A fast-moving cyclone attacks the US from the northwest.
http://tropic.ssec.wisc.edu/real-time/mtpw2/webAnims/tpw_nrl_colors/namer/mimictpw_namer_latest.gif

Thank Goodness my son is here so I won’t fire up my frozen shoulder condition shoveling the garage/house area. And have sliced up a block of kidney fat suet for the birds to get us through the storm. All safe up here at the UP border.