This is a quick introduction to the 2019 paper The “Ocean Stabilization Machine” May Represent a Primary Factor Underlying the Effect of Global Warming on Climate Change by Mao et al. (pdf here). I believe many visitors here would find interest in their projected decrease (yup, decrease) in global land surface temperatures by the early 2100s and their conclusion that the recent global warming may have occurred primarily through natural factors.

Global cooling? I’m against it. Considering how cold it was outside my home this morning (about -18 deg C, or roughly 0 deg F), I’m glad I have a fossil-fuel-powered heating system. Brrrr.

A recent post New Paper: Modern Warming Was Driven By ‘Primarily Natural’ Factors. Global Cooling Has Now Begun. authored by Kenneth Richards at Pierre Gosselin’s blog NoTrickZone introduced the Mao et al 2019 paper that’s the subject of this post. Figure 3 from the paper is presented below. Some readers may find the paper interesting. 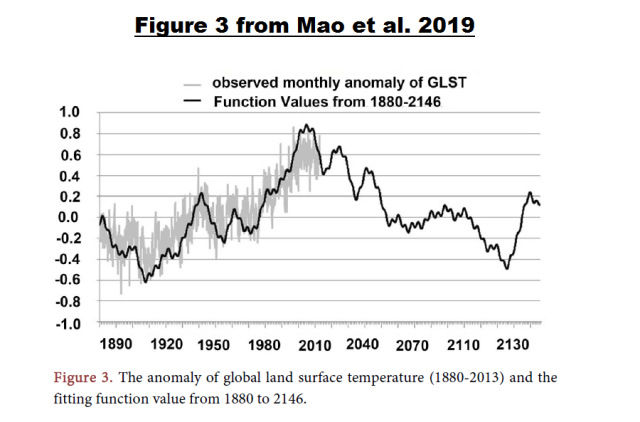 Have fun in the comments below and enjoy the rest of your day.