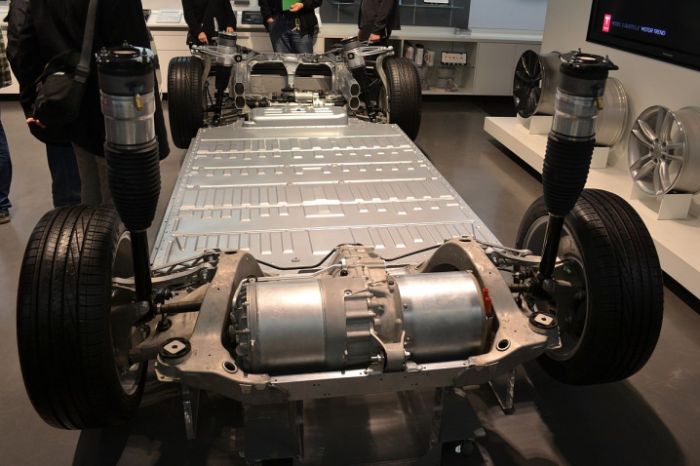 Figure 1 Tesla Model S floor pan viewed from the rear. The two metal cans between the rear wheels are the electric motor (left) and the controller/inverter (right). Photograph from Wikimedia/Oleg Alexandrov

Two teenagers died in Fort Lauderdale after being trapped in a Tesla car which burst into flames after a crash.

Two young men, “as close as brothers,” were supposed to be attending college in the fall. Instead, their families and classmates are mourning them after a fiery crash of an electric car on a curvy road on Fort Lauderdale beach.

Driver Barrett Riley, of Fort Lauderdale, and front-seat passenger Edgar Monserratt Martinez, of Aventura, both 18 and students at Pine Crest School, were trapped in the burning wreck and died in Tuesday’s crash, police and fire officials said. Another passenger, also 18, was taken to a hospital.

The trio was traveling in a Tesla Model S sedan along Seabreeze Boulevard before it crashed into a concrete wall, police said.

The Tesla does not use a gasoline-powered engine and is powered by a battery. The National Transportation Safety Board said it was sending a team to Fort Lauderdale on Wednesday to investigate, to “primarily focus on the emergency response in relation to the electric vehicle battery fire, including fire department activities and towing operations.”

The NTSB said it has a history of investigating emerging technologies to understand their effect on transportation accidents.

Back-seat passenger Alexander Berry, of Fort Lauderdale, was ejected from the car. Firefighters took him to Broward Health Medical Center, where he was in fair condition Wednesday, the hospital said.

The chemicals inside battery cells can be corrosive and flammable, said Karl Brauer, executive publisher for Autotrader and Kelley Blue Book. “Electric vehicles are not more prone to fire, but batteries can burn hotter fires that are harder to extinguish,” he said. “Once there is a fire and you melt the battery pack, chemicals come out and when those chemicals come out, the fire can start, even without a spark.”

The cause of the crash appears to have been irresponsible driving, but given the kid who was thrown from the car survived, it seems likely the kids who burned to death would also have survived if the batteries hadn’t caught fire. Gasoline cars can also catch fire when they crash, but the suggestion that battery fires burn hotter and are harder to extinguish than gasoline fires is a concern.