Well… AEO 2018 was no disappointment!

and analysis of energy topics

EIA’s Annual Energy Outlook provides modeled projections of domestic energy markets through 2050, and it includes cases with different assumptions regarding macroeconomic growth, world oil prices, technological progress, and energy policies. Strong domestic production coupled with relatively flat energy demand allow the United States to become a net energy exporter over the projection period in most cases. In the Reference case, natural gas consumption grows the most on an absolute basis, and nonhydroelectric renewables grow the most on a percentage basis.

Even though Obama is out and energy dominance is in, they still feel the need to throw a bone to wind & solar:

In the Reference case, natural gas consumption grows the most on an absolute basis, and nonhydroelectric renewables grow the most on a percentage basis.

After downloading the PowerPoint and some of the Excel workbooks, I put together a summary of some key points.

While it may be true that “nonhydroelectric renewables (renewables in the table below) grow the most on a percentage basis,” growing from 7% to 12% ain’t much to brag about.  Units are in quadrillion Btu (quad) and percent of total consumption:

Note that coal consumption barely declines, petroleum stays about the same and natural gas skyrockets (86’ing the Clean Power Plan was a most excellent move by President Trump).  When I lump fossil fuels together, things really get cool:

In other good news, the U.S. will continue to “green the planet” at a decent pace:

I used the data browser to break wind, offshore wind, solar PV and solar thermal out of the renewables category and found the following:

Figure 4. Note the total lack of growth of offshore wind, solar thermal and onshore wind after 2022.  Updated 2/9/2018 to correct “other renewables.”

With virtually no installations of offshore wind power over the next 33 years, it looks like most Atlantic and Pacific coast governors will be disappointed. 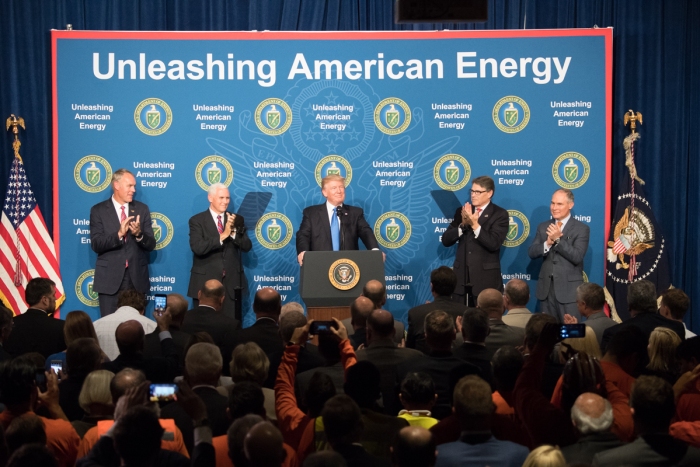 Same as it ever was…

Same as it ever was…

Just as true today as it was 40 years ago.  Milton Friedman…Truly… Once in a lifetime (H/T to The Talking Heads).

A comment by Lorne White included a link to a Post Carbon Institute discussion of the AEO forecast.

The Energy Information Administration (EIA) of the U.S. Department of Energy is about to release its Annual Energy Outlook (AEO) 2018, with forecasts for American oil, gas, and other forms of energy production through mid-century. As usual, energy journalists and policy makers will probably take the document as gospel.

That’s despite the fact that past AEO reports have regularly delivered forecasts that were seriously flawed, as the EIA itself has acknowledged. Further, there are analysts inside and outside the oil and gas industry who crunch the same data the EIA does, but arrive at very different conclusions.

The last few EIA reports have displayed stunning optimism regarding future U.S. shale gas and tight oil production, helping stoke the notion of U.S. “energy dominance.” No one doubts that fracking has unleashed a gusher of North American oil and gas on world markets in the past decade. But where we go from here is both crucial and controversial.

The most comprehensive critiques of past AEO forecasts have come from earth scientist David Hughes, a Fellow of Post Carbon Institute (note: I, too, am a Post Carbon Institute Fellow). Since 2013, Hughes and PCI have produced annual studies questioning EIA forecasts, based on an analysis of comprehensive play-level well production data. Their latest report, a critical look at AEO2017, is just out…

Past AEO forecasts were not “seriously flawed” because reality diverged from the forecasts.  The explosion of oil & gas production was simply not predicted by the EIA.

The EIA conducts “post mortem” analyses of their forecasts and makes the results available to the public.  I downloaded two Excel files for AEO crude oil and natural gas production.  The most striking thing is that the “shale boom” came out of nowhere in the eyes of the EIA.

Figure 9.  Selected AEO forecasts vs actual oil production.  Note that the shale “revolution” was not even in the range of technological possibilities as recently as 2008.  The 1998 forecast assumed that the US was past “Peak Oil.”

These forecasts only work from conditions that are known at the time they are generated.

Most of the productivity improvement has been through cost reduction, much of it falling on oilfield service companies.

Figure 12. Marcellus breakeven prices by operator in 2016. Note that the smaller, leaner operators like Cabot and Chief have he lowest breakeven prices and drilled the most wells. Source: BTU Analytics.

If natural gas prices evolve in a totally different manner than the EIA forecast, the mix of natural gas and coal will evolve differently.  No one can predict how quickly technology will improve and reduce costs.

In the event that the Marcellus craps out or that technological advances stall, natural gas prices would likely rise to the point that 3 BCF blips in the Gulf of Mexico would become economic.  The “price mechanism” works, just ask Milton Friedman.