NPR Is Seeking A Science Editor. Science Education Not Required.

The job ad is appalling.

NPR, which to its credit at least attempts to cover science and health, is looking for a new Science Editor. Unfortunately, actually being trained in science is not required for the job.

Under the qualifications section, the ad says, “Education: Bachelor’s degree or equivalent work experience.” Amazingly, not only is a background in science unnecessary, college itself is optional.

If you’ve ever wondered why science journalism is so incredibly bad, this is why. (It’s also one reason why we ranked NPR’s science coverage rather poorly.) But it’s not just NPR. It’s almost all of journalism.

KCTS, the PBS affiliate in Seattle, has a job ad for Science/Environment Producer. Once again, neither a background in science or even a college degree is required. Instead, the jaw-dropping ad reads:

“The ideal candidate will be an experienced field producer with a deep understanding of Northwest environmental issues, including urban sustainability and environmental justice.”

In other words, the ideal candidate works for Greenpeace or Sierra Club in policy issues rather than accepting science.

American Council on Science and Health

Alex Berezow has always been a straight shooter.  Real Clear Science was far better when he and Hank Campbell were involved.

Dr. Alex Berezow joined the American Council on Science and Health as Senior Fellow of Biomedical Science in May 2016. Dr. Berezow is a prolific science writer whose work has appeared in multiple outlets, including The Wall Street Journal, CNN, BBC News, The Economist, and USA Today, where he serves as a member of the Board of Contributors. In 2017, he published Little Black Book of Junk Science, and with Hank Campbell in 2012, he co-authored Science Left Behind, which was an environmental policy bestseller. Dr. Berezow has spoken to a wide variety of audiences about science, from graduate school seminars and church congregations to national TV and radio programs. Formerly, he was the founding editor of RealClearScience. He holds a Ph.D. in microbiology.

While a science Ph.D. may not be necessary to be a science journalist, some educational or work experience in STEM (science, technology, engineering and mathematics) should be a prerequisite.  Science journalism is generally abysmal.  However, there is one notable exception: local news broadcasts.  Whenever there is an earthquake, volcanic eruption or some other geological/geophysical catastrophe, who does the local news anchor turn to?

Although, even in the area of broadcast meteorology, the focus is blurred by the “E” word…

The Certified Broadcast Meteorologist (CBM) program was established to raise the professional standard in broadcast meteorology and encourage a broader range of scientific understanding, especially with respect to environmental issues. Among radio and television meteorologists, the CBM designation is sought as a mark of professional distinction and recognition.

That said, it’s a fairly safe bet that no Certified Broadcast Meteorologist would try to link asteroids to climate change or government shutdowns.

Not a Drill: Oil and Gas Exploration Dead in the Water for Governors

With most coastal chief executives ready to battle to protect their seashores and fisheries, the Trump administration storms into the country’s first energy-environmental showdown.

The debate over offshore oil and gas drilling is the first major clash of the Trump-inspired energy-environmental wars. This battle doesn’t just pit the states against the federal government; it also pits the fossil fuel actors that quickly seized the regulatory levers of government against the renewable energy forces that were empowered during the Obama years. Unlike the new federal centurions, governors in Massachusetts, New Jersey, New York, Oregon, Rhode Island, and elsewhere have firmly embraced renewable energy in the oceans in the form of wind farms.

Turbines are not benign; they come with their own environmental negatives as any ornithologist can attest. But they are unlikely to produce the kind of environmental devastation that a Deepwater Horizon-style oil spill can unleash, or produce the greenhouse gases that imperil life on Earth.

Ms. Gurley’s degrees in political science enable her to cover “several beats, including mass transit, municipal government, child welfare, and energy and the environment“; and to write something this fracking stupid:

Turbines are not benign; they come with their own environmental negatives as any ornithologist can attest. But they are unlikely to produce the kind of environmental devastation that a Deepwater Horizon-style oil spill can unleash, or produce the greenhouse gases that imperil life on Earth.

In U.S. offshore drilling and production, there is no such thing as “a Deepwater Horizon-style oil spill.”  There’s just the Deepwater Horizon oil spill, more commonly referred to as “Macondo” in the oil industry.

“Or produce the greenhouse gases that imperil life on Earth”… I’ll let Tim Allen handle this one.

Scientific American fared a little better with this story…

By Brittany Patterson, ClimateWire on February 5, 2018

States bordering the outer continental shelf are looking for carbon-free electricity, even as the Trump administration rolls back rules requiring it. Last week, New Jersey Gov. Phil Murphy (D) announced that his state will aim for 3,500 megawatts of installed offshore wind by 2030, enough to power 1 million homes. Massachusetts has a goal to build 1,600 MW of offshore wind power by 2027, and New York has committed to 2,400 MW by 2030.

It’s possible that the wind and oil industries may compete for the same blocks of ocean seabed. That could create strife. Generally, when BOEM grants renewable energy rights on the outer continental shelf, they are exclusive rights to the seafloor.

While the article does go on to discuss the synergies that would occur with offshore wind farm installations and offshore drilling and production facilities, the article includes two mind bogglingly stupid concepts…

Nether article even touched on the atrocious economics of offshore wind power, although the Scientific American did at least mention the death of “Cape Wind’s 130-turbine project off the coast of Martha’s Vineyard.” 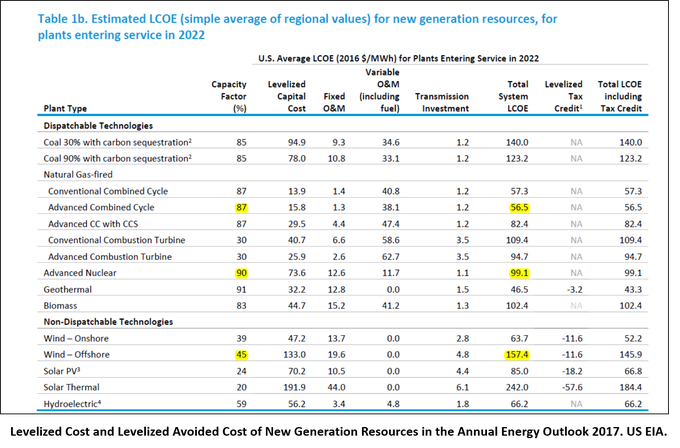 Offshore wind costs more than “beautiful clean coal” with CCS, almost twice as much as nuclear power and it’s half as reliable.  No, offshore wind is not down to £57.5/MWh (~$80/MWh) in Europe.

In light of the journalistic practice of assuming that wind and fossil fuels are interchangeable and mutually incompatible:

99 thoughts on “Bad science journalism and the false dilemma of offshore wind and oil.”