Much angst has been expended on a very vague climate threshold, the so-called “2 degrees Celsius limit”, sometimes called the “2° global warming tipping point”.  I find it all quite hilarious, for a reason that will become clear shortly. First a bit of prologue. Here’s the New Republic from 2014 about the two-degree limit:

The de facto assumption of climate change policy is that the world must limit the increase in global temperatures to 3.6 degrees Fahrenheit (2 degrees Celsius) above pre-Industrial levels, or risk hitting a tipping point where the impact becomes irreversible. The figure dates back to 1975, when economist William Nordhaus suggested that more than 3.6 degrees [F] of warming would “take the climate outside of the range of observations which have been made over the last several hundred thousand years.” By the 1990s, 3.6 degrees [F] gained traction in the scientific community and then in politics, when the European Council argued in 1996 that 3.6 degrees [F] should be the United Nations’ red line for global warming. It wasn’t until four years ago, at a climate conference in Cancun, Mexico, that countries finally committed to “hold the increase in global average temperatures below” 3.6 degrees [F].

Here’s another, from “The Conversation” in 2017, along with its obligatory accompanying heartbreaking graphic (emphasis mine): 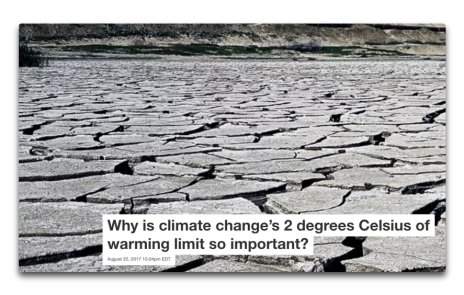 If you read or listen to almost any article about climate change, it’s likely the story refers in some way to the “2 degrees Celsius limit.” The story often mentions greatly increased risks if the climate exceeds 2°C and even “catastrophic” impacts to our world if we warm more than the target.

Recently a series of scientific papers have come out and stated that we have a 5 percent chance of limiting warming to 2°C, and only one chance in a hundred of keeping man-made global warming to 1.5°C, the aspirational goal of the 2015 Paris United Nations Framework Convention on Climate Change conference. Additionally, recent research shows that we may have already locked in 1.5°C of warming even if we magically reduced our carbon footprint to zero today.

And there’s an additional wrinkle: What is the correct baseline we should use? The Intergovernmental Panel on Climate Change (IPCC) frequently references temperature increases relative to the second half of the 19th century, but the Paris Agreement states the temperature increases should be measured from “preindustrial” levels, or before 1850. Scientists have shown such a baseline effectively pushes us another 0.2°C closer to the upper limits.

Or else, we’ve been warned over and over … or else we’re facing Thermageddon, the fabled end of times. More floods. More droughts. More heat waves. More cold waves. At 2°C of warming, we’re supposed to be in deep trouble. Plants and animals curl up their toes and die. Birds fall off the perch, parrots are pining for the fjords. Stick a fork in the globe, we’re toast.

However, noticing this lack of a control should not make us give up experiments. Although there are no controlled experiments, there are “natural experiments”. I first came across this term a while ago in the 1998 paper by Sherwood Idso. It’s available at Warwick Hughes’ site here.

So … what natural experiment might we look at regarding the dreaded 2 degrees Celsius lime? 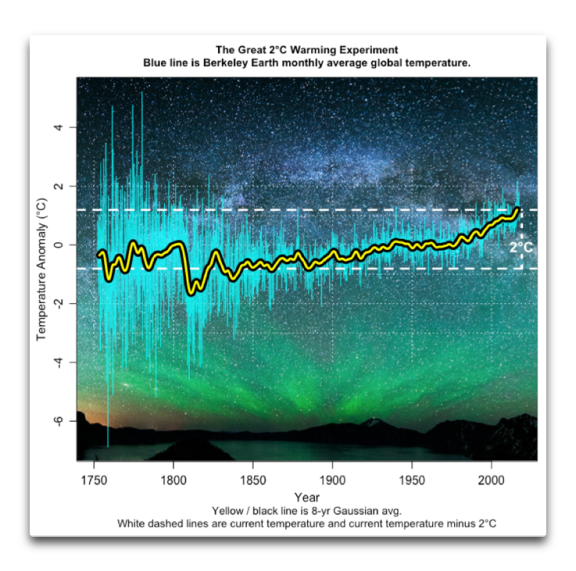 … there is our natural experiment. I’m sure you can see the problem …

So my question to the assembled masses is … now that we’ve breached the all-important two degree Celsius climate limit, where are the corpses? Where are the unusual disasters? Where are the climate-related catastrophes? Why are there no flooded cities? What happened to the areas that were supposed to be uninhabitable? Where are the drowned atolls? We were promised millions of climate refugees, where are they?

In short, where are any of the terrible occurrences that we’ve been warned would strike us at the 2 degree Celsius limit?

Seriously, we’ve just done the natural experiment. The world has warmed up the feared amount, and there have been no increases in any climate-related disasters.

Why no increases? Good question. Part of the answer is that much, perhaps most of that warming has occurred a) at night b) during the winter c) in the sub-polar and cold-temperate regions of the planet. And call me crazy, but I don’t think anyone in Boston or Vladivostok will complain if midwinter nights are a degree or so warmer, particularly the poor …

Another part of the answer is that in general, warmth is a good thing for both animals and plants. Longer growing seasons, less ice on the rivers, warmer soil, less frostbite for the homeless, less need to insulate and heat, every bug is happy … there is a reason that life grows riotously and quickly in the tropics, and sparsely and slowly near the poles.

I guess the best news is that the worst has happened, nothing we can do, we’re doomed. We’ve lost the war on the thermometer. We’ve gone over the climate tipping point, we’ve surpassed the 2-degree climate limit, been there, exceeded that … so perhaps, at last, we’re now free to go attack some real problems.

But … where are the corpses?

PS—Sadly, this mad preoccupation with changes of tenths of a degree obscures the astounding stability of the Earth’s climate system. It is this ever-surprising stability which first attracted my attention and led me to study the climate. Looking at that stability let me know immediately that the temperature of the system was governed by some combination of thermoregulatory phenomena. You don’t get that kind of stability by accident.

So let me leave you with the exact same data that you see in the graph above, but this time in engineers’ terms, looking at the climate as a planet-wide heat engine.

Best to you all in this most awesome world of marvels, stars, and northern lights,

196 thoughts on “Been There, Exceeded That”