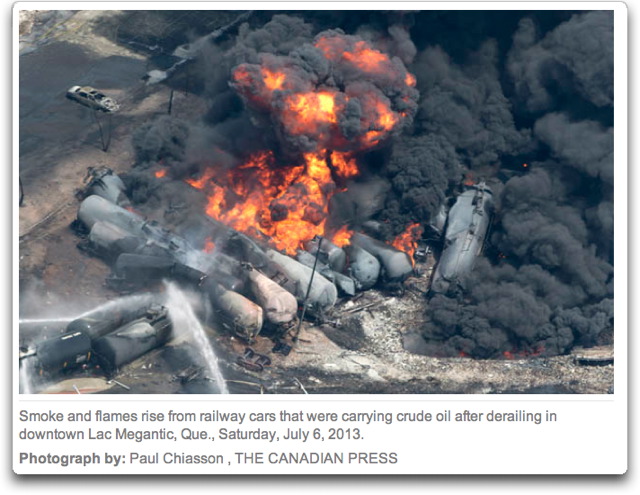 The LA Times doesn’t mind if cancelling Keystone leads to more rail and road freighting of oil, they think truck and tanker train oil spills are preferable to pipeline spills because they cause less environmental damage.

Editorial Keystone XL is still the wrong project for a world facing global warming. Kill it and be done

A decision Monday by the Nebraska Public Service Commission was supposed to settle the fate of TransCanada Corp.’s controversial $8-billion Keystone XL pipeline, which is designed to carry tar sands oil from Canada to U.S. refineries. But the commission didn’t give the company the green light it was looking for; instead, it approved a different and less-studied route for the pipeline than TransCanada wanted.

Proponents also argue that if the pipeline doesn’t get built, the tar sands oil would move to market anyway through alternative (and more expensive) means such as rail or truck tankers, which they argue pose a higher risk of spilling oil into the environment. But that’s not completely true. Train and truck accidents may indeed occur more often than pipeline breaks, but such accidents leak a small amount of oil compared to pipeline spills. Keystone itself proved that point last week when a single leak in an already operating section of its 2,687-mile pipeline system spewed 210,000 gallons of oil — or about two dozen tanker truck loads — onto South Dakota farmland.

There have also been some frightening near misses. A tanker train derailed in Gogama, Northern Ontario in 2015, though thankfully no loss of life on that occasion – the train derailed outside the town.

The 1998 Nigerian pipeline disaster led to over 1000 deaths, but Nigerian police believe the pipeline was deliberately ruptured by scavengers – many of the people who died were allegedly trying to steal fuel.

Pipelines can be routed around towns. Trains and Road Tankers usually have to navigate busy transport interchanges, where an accident or spill can lead to disastrous loss of life.