One of the most sweeping changes to the U.S. electricity supply market in the past two decades may be implemented before the coming winter heating season. The brief bottom line of the change is that eligible power sources will be able to participate in a details-to-be-determined rate structure that allows the owner to recover its “fully allocated costs” plus a “fair return on equity.”

Eligible grid reliability and resiliency resource is any resource that:

All licensed nuclear power plants and a significant portion of existing coal plants can meet those requirements today.

Along with his letter, Secretary Perry enclosed a Notice of Proposed Rulemaking (NOPR) that directs the Commission to either take final action within 60 days after publication of the NOPR in the Federal Register (which has not yet occurred) or to issue the proposed rule as an interim final rule. Any rules included in the final action will go into effect within 30 days after publication.

The Summary section of the NOPR includes statements with legal justification for the FERC’s authority to issue the proposed rule without an Environmental Assessment or an Environmental Impact Statement.

It also provides an analysis concluding that the proposed rule does not have any significant economic impact on small entities and thus does not need to meet certain description and analysis requirements of the Regulatory Flexibility Act of 1980 (RFA).

Free market purists like R Street may have complained a bit about the hand on the scale in favor of renewable energy resources, but their expressed faith in the market decision making process really triggered by the idea that coal and nuclear plants might not be forced to retire.

As a lifelong fan of reliable electricity who has visited places where brownouts and rolling blackouts are an accepted fact of life, I do not support the Enron-conceived notion that electricity is just another tradable commodity with opportunities for fabulous rates of return in certain conditions.

Blackouts and brownouts impose a far greater cost on the overall economy that most people realize. Electricity is too important to be left to the vagaries of short term markets, especially since the markets have already been tipped heavily in favor of unreliables and natural gas.

Wind and solar power advocates are either confused or disingenuous when claiming that their power sources, which – by definition – cannot be well protected from the weather, are reliable and provide resilience.

The American Petroleum Institute and its partners in the natural gas industry are mad because their long running price war against coal and nuclear may be interrupted before it achieves its desired objective of driving out enough of its competitors to give it scarcity pricing power.

The rule makes sense. The urgency is justified. I fully expect that there will be numerous interests that will seek delays because those will help them achieve their objective of forcing permanent plant closures.

It is too bad the rule wasn’t implemented in time to save valuable, emission-free, fuel-secure assets like Vermont Yankee, Kewaunee, and Ft. Calhoun. Fortunately, it looks like it might have been issued in time to save a couple of dozen other nuclear plants that are at risk of prematurely closing in the next five years.

If enacted, this resiliency plan would lead to lower electricity rates than would occur if nuclear and coal-fired plants continue to shut down. The loss of base load capacity would lead to greater dependence on inefficient and expensive “peaker” power plants.

In a purely laissez-faire world, natural gas combined cycle (NGCC) would be the only type of power plant being built. No other type of new power plant has an honestly positive NPV (net present value) using a realistic discount rate. This would be great for my industry (oil & gas), but eventually bad for electricity consumers, because it would drive up natural gas prices. Unlike Australia, we have more than enough natural gas production to meet domestic demand and become a world leader in LNG exports. However, we can’t bet the farm on fracking and shale plays. All shale plays eventually peak. The Marcellus is huge… but it will eventually peak. As natural gas prices gradually creep up from $3/mcf to $5-8/mcf over the next ten years, existing coal and nuclear power plants will become very competitive with NGCC… But, only if those power plants are still existing.

Given a choice between subsidizing reliable base load power plants or unreliable non-dispatchable power plants, it would be foolish to choose the latter.

This isn’t a random pattern:

Electricity costs as a function of per capita installed renewable capacity. Wind and solar only, excludes hydropower. [Updated to add Australia and correct the units] – Source: Willis Eschenbach 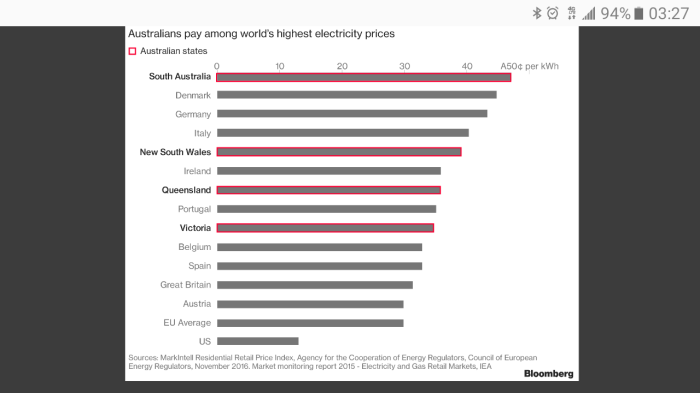 Although the causes of Australia’s high electricity prices are a bit more complicated than Germany’s or Denmark’s. The costs are skyrocketing due to a lack of investment in fossil fuel infrastructure and the inability of wind & solar to actually replace coal…

What caused the power price spike?

There are two main causes of the sudden jump in electricity prices. And despite the frothing anger from the shock jocks, it has nothing to do with the rise of renewables.

The main cause is a lack of investment. And the second is the soaring price of gas.

As old coal-fired plants have been retired, there has been insufficient investment to replace them because power companies have been left in policy limbo over carbon pricing.

How does gas affect electricity prices?

The second contributor to soaring electricity prices has been the sudden spike in gas prices.

In the absence of any political leadership, the power industry correctly figured renewables such as wind and solar eventually would be cheaper and more efficient than coal. That is because the fuel — wind and sun — is free and the maintenance costs of the plants is low.

The problem with renewables is their unreliability. Given Australia’s gas abundance, the idea was that gas would cut in whenever there was an energy shortfall.

Unlike coal plants that take weeks to fire up or shut down, gas turbines can be turned on and off at short notice, making them ideal to fill the breech when renewables are offline.

As the last player to enter the market, during power shortages, gas becomes the overall price setter. In case you have not noticed, gas prices have quadrupled because the exporters — many of which are the electricity generators — have sold more gas to offshore customers than their reserves. So, they pillaged local supplies, sending domestic gas prices through the roof.

This sentence is 100% disingenuous:

And despite the frothing anger from the shock jocks, it has nothing to do with the rise of renewables.

The “rise of renewables” may not be the direct cause of Australia’s high electricity prices. However the transition from coal to [fill in the blank] is the direct cause.

Unlike the US, Australia doesn’t produce enough natural gas to export large volumes of LNG without driving up domestic prices.   Australian LNG landed in Japan is actually 40% cheaper than natural gas produced and sold in Australia.

Australia’s coal-fired plants are shutting down and being replaced by unreliable wind & solar and expensive natural gas plants. Claims that wind & solar are now less expensive than coal per MWh are wholly irrelevant. Solar and wind have to be 1/4 to 1/2 the price of coal per MWh to compete. And, even then, they can’t actually provide base load, because they are non-dispatchable.

Even if we assume this is accurate, neither storage nor back-up is factored into the cost of new power generation.

Over the twenty year lifespan of the wind and solar power plants, the batteries would have to be replaced once.  That brings the storage cost up to $77 (US) per MWh of generation.  Convert to AUD and it’s $99/MWh.  Tack that on to the LCOE:

Wind & solar only appear to be affordable…

Until you add in the cost of storage…

Even with Australia’s high natural gas prices, combined cycle natural gas and coal are much cheaper than wind & solar, if you factor in the storage costs.

Australia’s electricity rates have skyrocketed because they didn’t maintain their base load capacity (mostly coal-fired generation). Perry’s resiliency pricing plan would prevent this from happening here.  While allowing natural gas to kill coal & nuclear would be very good for my industry, in the long run, it wouldn’t be good for grid resiliency, electricity consumers or our nation’s energy security.