Guest essay by Dr. Jennifer Marohasy, republished from the Australian Spectator with permission from the author.

I don’t believe in conspiracies of silence except when it comes to Harvey Weinstein and the Australian Bureau of Meteorology.

For some time, weather enthusiasts have been noticing rapid temperature fluctuations at the ‘latest observations’ page at the Bureau’s website. For example, Peter Cornish, a retired hydrologist, wrote to the Bureau on 17 December 2012 asking whether the 1.5 degrees Celsius drop in temperature in the space of one minute at Sydney’s Observatory Hill, just the day before, could be a quirk of the new electronic temperature sensors. Ken Stewart, a retired school principal, requested temperature data for Hervey Bay after noticing a 2.1 degrees Celsius temperature change in the space of one minute on 22 February 2017.

In both cases, the Bureau assured these ‘amateurs’ that they didn’t understand what they were noticing. In the case of Dr Cornish, he was referred to a Bureau report that makes reference to international studies, which explains how measurements from the fast responding electronic sensors are made comparable with measurements from the more inert mercury thermometers by averaging over at least one minute – except the Bureau does not actually average any of the measurements recorded from its custom-built sensors.

On a hot day, the air is warmed by turbulent streams of ground-heated air that can fluctuate by more than two degrees on a scale of seconds. So, if the Bureau simply changed from mercury thermometers to electronic sensors, it could increase the daily range of temperatures, and potentially even generate record hot days approach 50 degrees Celsius, because of the faster response time of the sensors.

Except to ensure consistency with measurements from mercury thermometers there is an international literature, and international standards, that specify how spot-readings need to be averaged – a literature and methodology being ignored by the Bureau. For example, the UK Met office takes 60 x 1-second samples each minute from its sensors and then averages these. In the US, they have decided this is too short a period, and the standard there is to average over a fixed five-minute period.

The Weather Observers Handbook 2012, for example, states that if averaging is not over a five-minute period it affects temperature extremes. An example is even provided. Dodge City, Kansas, has a long temperature record dating back to 1875. The hottest day on record stood at 43.3 degree Celsius. Then there was a heatwave in 2011, the highest reading from an electronic sensor was 43.9 degree Celsius. But when it was found this record was from readings that had only been averaged over only one minute, the new record was scratched – because when the same readings were averaged over the ASOS standard of five minutes, the maximum temperature was 43.3 degree Celsius – a tie.

In Australia, our Bureau takes not five-minute averages, nor even one-minute averages. As Ken Stewart discovered when he persisted with understanding the nature of the data he had been provided by the Bureau from Hervey Bay: the Bureau just take one-second spot-readings. 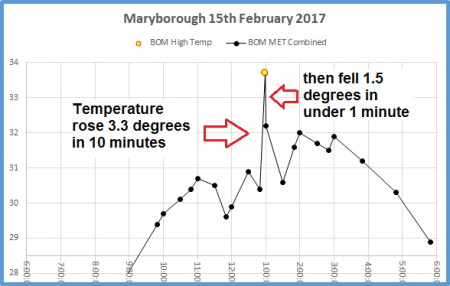 Example of an Artificial Temperature Spike – Image from Ken Stewart

Check temperatures at the ‘latest observations’ page at the Bureau’s website and you would assume the value had been averaged over perhaps 10 minutes. But it is dangerous to assume anything when it comes to our Bureau. The values listed at the ‘observations’ page actually represent the last second of the last minute. The daily maximum (which you can find at a different page) is the highest one-second reading for the previous 24-hour period: a spot one-second reading in contravention of every international standard. There is absolutely no averaging.

For about five weeks now the Bureau have been obfuscating on this point. There is ‘more than one way’ of achieving compliance with WMO guidelines they write in a ‘Fast Facts’ published online on September 11 – after I wrote a blog post detailing how their latest ‘internal review’ confirmed they were in contravention of international standards. I even suggested that the last 20-years of temperature recordings by the Bureau will be found not fit for purpose, and eventually need to be discarded. (I would have written like Harvey Weinstein, except that was a few weeks before this other scandal broke.)

The Bureau has been insisting for some time that they don’t need to average because they have sensors with a long response time, which actually represent an average value, that is the same as the time constant for a mercury thermometer. How this is achieved in practice was detailed for the first time in a letter from the new head of the Bureau Andrew Johnson, last Friday.

The letter explains that all the sensors the Bureau uses have been ‘purpose-designed’. I had been requesting manufacture’s specifications, but instead, I received this advice that it’s to Bureau specifications and, by inference, there is no documentation. To be clear, there are also no reports detailing the laboratory and field tests that explain how the custom-built devices have been designed to ‘closely mirrors’ the behaviour of mercury thermometers including the time constants – to quote from Dr Johnson’s letter of last Friday.

The few values quoted in this letter from Dr Johnson indicate that the Bureau has rolled-out a network of electronic sensor that under hot and windy conditions will potentially capture temperature spikes – as noted by Mr Stewart and Dr Cornish – which would be impossible from a mercury thermometer.

I am not blaming the sensors for being so responsive, just the Bureau for pretending one-second spot-readings from their purpose-designed sensor are comparable with instantaneous readings from mercury thermometers – while providing no proper documentation. I’ve suggested recording in a way that will facilitate averaging, but Dr Johnson has indicated that the Bureau would be ‘unable to meet this request’. I am not blaming Dr Johnson exactly, he didn’t put the system in place, but he is going to defend it.

If you believed in conspiracies, you might believe the increase in the incidence of hot days across Australia was because of the purpose-designed sensors, but really it has more to do with the system of one-second spot readings. Whichever, the Bureau can give us a hottest winter on record, even when there are record snow dumps in the Alps, and record numbers of frosts on the flats.

While it may be the expectation of the Australian community that temperatures would be measured consistent with some standard, clearly this is not the case. The only real question now, is whether the Bureau is such a big and important Australian institution that, like Harvey Weinstein, it’s transgressions are best ignored – at least for the moment, not under the current Minister’s watch, what? I had my eyes closed.

Jennifer Marohasy is a Senior Fellow at the Institute of Public Affairs and blogs at jennifermarohasy.com.

213 thoughts on “In Australia, faulty BoM temperature sensors contribute to “hottest year ever””