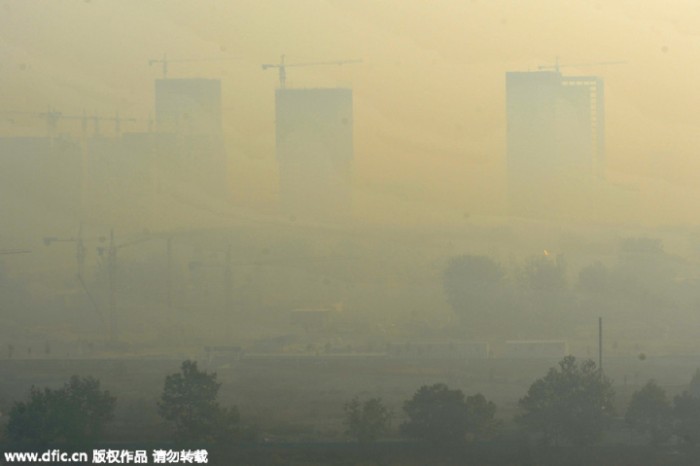 Smog hangs over a construction site in Weifang city, Shandong province, Oct 16. 2015. Air quality went down in many parts of China since Oct 15 and most cities are shrounded by haze. [Photo/IC]

China has stepped up its efforts to promote sham green narratives, while simultaneously waging a brutal crackdown against Christianity and other faiths.

Chinese carmakers have been issued new standards by the government as part of a plan to reduce the manufacture of fossil fuel-powered vehicles. China is becoming a leader in reducing fossil fuel emissions.

China has announced that automakers that want to manufacture fossil fuel-powered cars first must produce low-emission and zero-emission cars to attain a new energy vehicle score. The new rule applies to companies that make or import more than 30,000 fossil fuel cars annually. This means that by 2019, carmakers must be producing a fleet with a total of 10% or more electric vehicles, and 12% or more by 2020.

China’s new rule is part of an aggressive plan to phase out fossil fuel vehicles, a goal it shares with the UK and France, which both plan to ban sales of fossil fuel cars by 2040. A recent report indicates that China’s auto market will be all electric by 2030. While the country’s original plan was to ban fossil fuel vehicles outright — which was criticized as too ambitious — this revised version of the plan is aggressive, yet workable, allowing automakers time to adjust to the changing market.

This is part of a larger effort on China’s part to reduce carbon emissions and fossil fuel dependency. In 2017 alone, China has surpassed many of its own ambitious environmental goals. By August, the country had already reached its 2020 solar energy installation target, reasserting itself as the largest producer of solar power on earth. In June, an entire region of China ran on 100 percent renewables for seven days. China has begun to build a large-scale carbon capture and storage plant — the first of eight — as part of its attempts to reduce its carbon footprint. The nation has invested more into renewables than any other country in the world, including the US, and has begun to reap the benefits, turning around many of its pollution problems.

Of course, China is still burning a lot of coal.

China’s Image Campaign: Green on the Outside, Black on the Inside?

“Green mountains and clear water are as good as mountains of gold and silver,” said Chinese President Xi Jinping as he underscored his country’s commitment to becoming an “ecological civilization” at the 2016 UN climate change conference in Marrakech. Fine words. But should we believe them?

After years of being known as one of the dirtiest countries on the planet, China is now making a concerted effort to re-brand itself as a proponent of green energy. This forms part of a wider, multi-channel effort to boost its global soft power that encompasses everything from building new language institutes to trying to head major UN bodies. However, whether this is a legitimate strategy or just good PR is a question Beijing still struggles to answer convincingly.

Undoubtedly, China is making some positive changes. The country has been catching up with its counterparts by planning new national parks. Aimed at protecting areas of outstanding beauty and preventing environmental damage from construction, mining, and pollution, the parks are due to open in 2020. This is also the deadline China has set for ploughing $361 billioninto renewable power sources. The Chinese government hopes that in just three years, these sources will account for half of new electricity generation in the country.

So far, so good. But scratch beneath the surface, and there are indications “Green China” is actually just a veneer disguising a less palatable reality.

China is still the world’s largest producer of “black” aluminum. In 2016, coal still powered 88% of production. Pollutants released by aluminum production and other shady practices are among the many reasons that China’s inland waters are so befouled. According to Greenpeace China, 80% of shallow ground water wells are polluted.

Why do I think these simultaneous initiatives are part of an effort to establish climate as a new state religion? The reason is the Climate cult almost uniquely emphasises the need for a strong state to address the crisis.

Of course, a strong state can control the media. And if a few stories leak which contradict the official narrative, if evidence emerges that China’s embrace of green ideology is less than complete, it won’t matter. Greens have already demonstrated their total willingness to forgive China’s fossil fuel excesses.

Christianity by contrast emphasises the supremacy of God’s law. The Apostle Peter says “We must obey God rather than human beings” (Acts 5:29). The Christian bible carries an instruction to pay your taxes (Matthew 22:19-21), but the first loyalty of a Christian is to God.

A climate cult which demands a strong state, and emphasises the need for authoritarianism to solve their global crisis, and which appeals to the kids, is a ready made solution for a tyranny which is struggling to suppress rising social unrest and demands for more freedom, is alarmed by the rapid growth of Christianity within their borders, and which desperately needs a new message of unity to replace their failed Communist ideology.