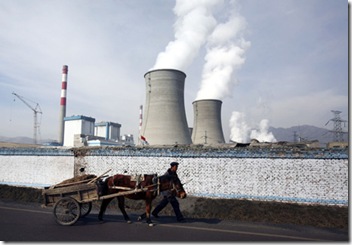 China has unveiled a crash plan to increase coal capacity and usage by 20% over the next 3 years.

China Doubles Down on Coal Despite Climate Pledge

Coal would still make up more than half of the country’s energy mix by 2020, according to latest plan.

BEIJING—China’s government said it would raise coal power capacity by as much as 20% by 2020, ensuring a continuing strong role for the commodity in the country’s energy sector despite a pledge to bring down pollution levels.

In a new five-year plan for electricity released Monday, the National Energy Administration said it would raise coal-fired power capacity from around 900 gigawatts last year to as high as 1,100 gigawatts by 2020. The roughly 200-gigawatt increase alone is more than the total power capacity of Canada.

By comparison, the agency said it would increase non-fossil fuel sources from about 12% to 15% of the country’s energy mix over the same period. Coal would still make up about 55% of the electricity mix by 2020, down from around two-thirds in recent years.

“This is indeed a disappointing target,” said Lauri Myllyvirta, a campaigner at the environmental group Greenpeace. “Given that there is already severe overcapacity and demand for coal-fired power is going down, we would have expected a cap on coal power capacity much closer to the current capacity level.”

As WUWT previously reported, China may be planning to export coal generated electricity to Europe, via ultra high voltage power lines, to arbitrage permanent structural price differences between restrictive European Paris Agreement pledges, and the Chinese commitment to do whatever they want.

The only real threat to this audacious Chinese plan to milk the West, is the possibility President Trump will tear up the Paris Climate Agreement.

Whatever China’s intentions, you have to admire their hilarious sense of timing – the new Chinese coal plan was announced on the first day of the Marrakesh COP22 Climate Conference.