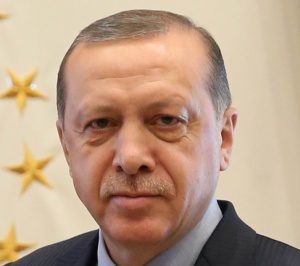 President Erdogan. By US Department of State – This file has been extracted from another file: Secretary Tillerson Meets with Turkish President Erdogan in Ankara (32921677663).jpg, Public Domain, Link

h/t climatereason – Turkey’s authoritarian President Erdogan, who has a track record of demanding cash for Turkey in exchange for cooperation with Western policy objectives, is worried that the US pullout from the Paris Agreement means he won’t get paid.

Erdogan said that when Turkey signed the accord France had promised that Turkey would be eligible for compensation for some of the financial costs of compliance.

“So we said if this would happen, the agreement would pass through parliament. But otherwise it won’t pass,” Erdogan told a news conference, adding that parliament had not yet approved it.

“Therefore, after this step taken by the United States, our position steers a course towards not passing this from the parliament,” he said.

Erdogan’s ultimatum re-inforces my view that the global climate movement always was a mirage created by tsunamis of US cash. Now the cash is drying up, leaders of countries who joined the Paris Agreement because they were hoping for a payout will move on to other opportunities. Of course, many countries will still claim to be adhering to the terms of the Paris Agreement, there is always a possibility of a few buckets of EU aid money. But nobody will take it seriously.