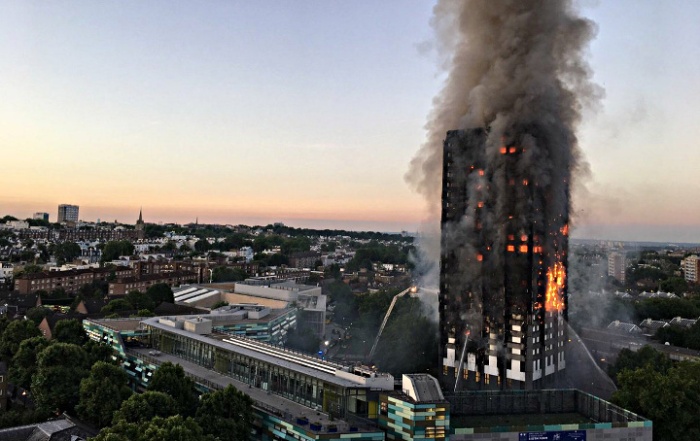 The flammable building cladding which helped turn Grenfell Tower into a blazing torch which killed at least 58 people on the 14th June this year may have been chosen in part due to its climate credentials.

Material would help make the flats look better from outside, planners noted

The cladding that might have led to the horrifying blaze at Grenfell Tower was added partly to improve its appearance.

During a refurbishment aimed at regeneration last year, cladding was added to the sides of the building to update its look. The cladding then seems to have helped the fire spread around the building, allowing it to destroy almost the entirety of the structure and kill people inside.

And that cladding – a low-cost way of improving the front of the building – was chosen in part so that the tower would look better when seen from the conservation areas and luxury flats that surround north Kensington, according to planning documents, as well as to insulate it.

A number of conditions were attached to the 2014 decision to approve the plan – many of which related specifically to the material used in the cladding, so that the council could ensure the “living conditions of those living near the development” were “suitably protected”.

The council noted that the cladding would also improve insulation, helping keep sound and cold out from the building, and improve ventilation. An environmental statement said that the “primary driver behind the refurbishment” was to address the insulation and air tightness.

“The reclad materials and new windows will represent a significant improvement to the environmental performance of the building and to its physical appearance,” the planning application reads. “The design of the scheme as a whole has fully considered policy requirements, expectations and aspirations, fully taking into consideration the immediate and wider surroundings, particularly focussing on creating a wider environment that works as a coherent place,” another part of the same document says.

That planning application concludes with a statement that “the development will provide significant improvements to the physical appearance of the Tower, as well as the environmental performance and the amenity of its residents”.

But Polyethylene is highly flammable.

The type of cladding used on the Grenfell building is reportedly banned for use on tall structures in the USA, due to the fire risk.

I used to be involved with local government in the UK. During this time the council I was involved with was subject to relentless pressure from the UK national government to consider greenhouse gas emissions with every decision. Compliance was often rewarded with increased funding.

I am not suggesting that anyone deliberately sacrificed the safety of the Grenfell tower residents to earn a few points with national government. It is far more likely that whoever made the decision to use the flammable cladding had no idea the cladding presented a serious fire risk. But in my opinion it is possible that the Alumninium coated Polyethylene cladding was chosen in preference to pure Aluminium cladding, in part because the superior insulation properties of the Polyethylene and the more favourable carbon footprint of Polyethylene helped burnish the green credentials of the officers and politicians who made that decision.

Update (EW): Dr Jim Glockling, Technical Director of the Fire Protection Association, said the following in an interview about Grenfell;

“There has been an emerging body of evidence surrounding some of the materials being used and now we have an appalling demonstration of what can happen,” he said.

Alongside the cosmetic appeal of cladding, it is used as an insulation to make buildings more sustainable to meet green energy requirements.

“It could be that this is the quest for sustainability trumping other concerns,” Dr Glockling warned.

419 thoughts on “Did UK Government Climate Mania Contribute to the Grenfell Tower Disaster?”