I wasn’t planning to write a series on notable springtime storms of the northeast, but I was considering writing something about this storm’s 20th anniversary. Instead, I spent much of this April 1st dealing with a brand new March 31/April 1 storm that brought me 12.3″ (31.2 cm) of snow here near Concord NH. While there are many March snow storms, there are a lot fewer in April. There is often ample atmospheric moisture in April, and its storms show what happens when there’s enough cold air available to make snow.

Besides, I knew that the good folks at the Blue Hill Observatory were in the maximum snowfall area of this historic storm and would be happy for me to share their own writeup.

This year’s March 31 – April 1 snowstorm from north of Boston into all of northern New England brings back memories from twenty years ago of the incredible “April Fool’s” nor’easter of 1997. This occurred when a rapidly deepening low formed off the New Jersey coast responding to a late season trough in the upper atmosphere. The storm then stalled just south of Martha’s Vineyard for about 12 hours producing snowfall rates as much as 3 inches per hour overnight, March 31 into April 1st. This storm still stands as the greatest 24 hour snowfall (29 inches, 74 cm) on record at Blue Hill Observatory.

Forever known as the “April Fool’s” snowstorm, the March 31- April 1 nor’easter produced 1 to 3-foot (30 to 90 cm) snowfall totals over a wide area. Boston recorded its heaviest April snowfall on record with 25 inches (64 cm), and its third-heaviest for any month. This amount roughly equaled what had fallen for the entire winter season that year in Boston. Several hundred thousand customers were without electricity during and after the storm due to the heavy/wet nature of the snow. Damage to trees in the area was extensive. High winds were also a problem with gusts in the 50 to 70 mile per hour (20 to 30 meters per second) range common along the coast. In Boston Harbor, the tip of one of the masts of the USS Constitution (“Old Ironsides”) was sheared off by the winds. Blue Hill Observatory reported a wind gust of 72 mph (32 m/s).

From The Worst Central Massachusetts Nor’Easters, Cornell.edu we get the following description:

The Winter of 1996-1997 had been mild and March the 30th was no different with highs well into the 50s and a few 60s in some spots across southern New England. Residents of central MA woke up to heavy rain on the morning of the 31st with temperatures in the middle 30s. But by 10am, Worcester had changed over to heavy wet snow and it started accumulating rapidly. Thunder and lightning accompanied the snow in early afternoon as the storm strengthened rapidly east of NJ and then stalled for about 12 hours south of Martha’s Vineyard when it reached its max intensity of 979mb. Winds of 40-50mph were common during the storm to go along with the heavy wet snow.

Temperatures nudged just below 30F overnight to allow for the snow to accumulate much better. From about 6 p.m. on the 31st to 6 a.m. April 1st, central MA saw probably its heaviest 12 hour snowfall on record. There were about 6 inches of snow on the ground by 6 p.m. on March 31st, but by 6 a.m. on the 1st of April, Worcester residents awoke to 33 inches (84 cm) of snow on the ground to establish a new single storm record; a cruel April Fool’s Day joke to those who had enjoyed the mild winter. The only saving grace was that the snow melted quickly as warm April temperatures returned to the region a few days later. Other snowfall totals include 27 inches in Jaffrey, NH; 30 inches in Shrewsbury; with the jackpot of 36 inches in Milford. To the east, Boston received 25.4 inches (64.5 cm) of snow to break their all time 24 hour snowfall record, making it their 2nd greatest single storm total behind the Blizzard of 1978.

At Blue Hill Observatory the rain changed to heavy wet snow at 11:30 a.m. and 16 inches fell by midnight – winds gusted to 72 mph and the barometric pressure dropped to 995.1 mb by 7 p.m. on the 31st. On April 1st, an additional 14 inches fell for a storm total of 30 inches (76 cm) of snow with a precipitation total of 4.11″ (10.4 cm) melted. The total snowfall occurred in just over 24 hours – 29 inches of that fell in 24 hours and holds the record for snowfall in any 24hr period. The April Fool’s, 1997 snowfall ranks as the 5th greatest snowfall in the Observatory’s 132 year climate record. (Per BHO Chief Scientist, Mike Iacono and BHO Chief Observer, Cecilia Borries-Strigle)

The Blue Hill Observatory was built atop a hill a little south of Boston in 1885. It was the first weather observatory built in the United States and has an unbroken weather record.

Some of their early “high tech” equipment is still in use although “antique” is sometimes the better description now. If you’re in the area, check their schedule and stop in for a visit. Whether there or not, check out their store, especially their books, or donate some money to help make up for cuts in state support. 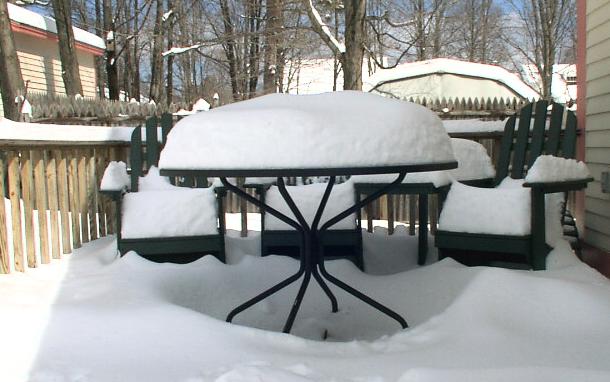