Robbie Andrew from the Center for International Climate and Environmental Research – Oslo has created an interesting animated graph showing the growth of CO2 in the atmosphere. While it has the typical “climate proponent” view attached to it, it is interesting to watch because it clearly shows how CO2 jumps faster when ENSO is strongly positive.

While we measure the amount of CO2 in the atmosphere in mere parts per million (ppm), this small amount has a substantial effect on the temperature at the surface of the Earth. The amount has now increased by 40% since the industrial revolution, leading directly to increased temperatures worldwide.

There are four main drivers of the changes in the level of CO2 in the atmosphere.

The first is the seasonal cycle, dominated by the forests of the northern hemisphere, absorbing CO2 via photosynthesis in summer and spring, and then, in autumn and winter, the decay of their fallen leaves to release some of that CO2 back into the atmosphere. This cycle can be seen here as a pulse, sometimes imagined as the planet ‘breathing’.

The second most important driver is our emissions from burning of fossil fuels and deforestation. This transfers carbon that has been stored for a very long time underground into the atmosphere in the form of CO2. Nature partially compensates for this increased level of CO2, with both forests and oceans absorbing more (the latter leading to acidification of the oceans), but this amounts to only a little over half of the new CO2, with 44% of each year’s emissions remaining in the atmosphere.

The third driver is often referred to as El Niño, or more correctly as the El Niño Southern Oscillation (ENSO). ENSO describes a naturally occurring cycle of pressure and temperature differences across the width of the Pacific Ocean. In El Niño years there tend to be more droughts in important forested areas, and that reduces the productivity of forests, in turn reducing their absorption of CO2 from the atmosphere. The drier conditions can also lead to increased wildfires, sending even more CO2 into the atmosphere. Strong El Niño conditions can be seen in here 1983, 1988, 1998, and 2015.

The fourth major driver is the periodic eruption of volcanoes, the most significant of which in the last few decades was Mt Pinatubo in the Philippines in June of 1991. The enormous amount of fine debris thrown into the atmosphere – probably the largest since Krakatoa in 1883 – stayed there for many months, blocking sunlight, reducing global temperatures by about 0.6°C, but also increasing diffuse sunlight, which stimulates tree canopy growth, with the overall effect of increased natural carbon sinks. Note that it’s not about the CO2 volcanoes emit when they erupt: Pinatubo emitted about 50 MtCO2 in 1991, compared with our own emissions of about 29000 MtCO2 in the same year.

The relative effects of ENSO and our emissions on the growth of atmospheric CO2 can be determined by analysis of these data. The bars at the bottom of the animation above show these effects, with the effect of emissions being always positive and growing, while that of ENSO flicks between positive and negative depending on whether the planet is currently in El Niño (to the right) or La Niña (to the left). The effect of the sea-surface temperatures used to measure ENSO on measured atmospheric CO2 is delayed by several months because of the natural processes involved. The year 2015 was a particularly strong El Niño year, and, when combined with our record-high emissions, atmospheric CO2 levels rose more sharply than usual.

Global emissions data are from the Global Carbon Project.

ENSO temperature data are from the Hadley Centre’s Sea Surface Temperature dataset HadSST.3.1. Note that data for October 2016 were not available at the time of writing.

For the relative effects of ENSO and emissions I have relied on the relationship found by Richard Betts and colleagues.

One thing worth noting is that Mr. Andrew’s opinion about the nature of ENSO and climate differs from the view of the NOAA ESRL author of this graph:

El Niño/Southern Oscillation (ENSO) is the most important coupled ocean-atmosphere phenomenon to cause global climate variability on interannual time scales.

What is clear from his MEI graph above, is that since 1976, we’ve spent far more time in the positive (warmer) phase of ENSO than we have in the blue (colder) phase. This is backed up by a BAMS paper in 2005 by Hartmann and Wendler, who say this about the climate of Alaska:

The 1976 Pacific climate shift is examined, and its manifestations and significance in Alaskan climatology during the last half-century are demonstrated. The Pacific Decadal Oscillation index shifted in 1976 from dominantly negative values for the 25-yr time period 1951–75 to dominantly positive values for the period 1977–2001.

Mean annual and seasonal temperatures for the positive phase were up to 3.1°C higher than for the negative phase.

This shift not only translates to Pacific ocean warming and subsequent climatological effects in Alaska, but also outgassing of CO2 due to CO2 having less solubility in warmer water (think warm soda pop).

Roger Andrews noted this in 2012 in a comment left at Tallbloke’s Talkshop:

The graph compares ICOADS global SST anomalies with the Mauna Loa CO2 record, with both records 12-month smoothed to remove seasonality. The scales are adjusted so that CO2 visually tracks SST. 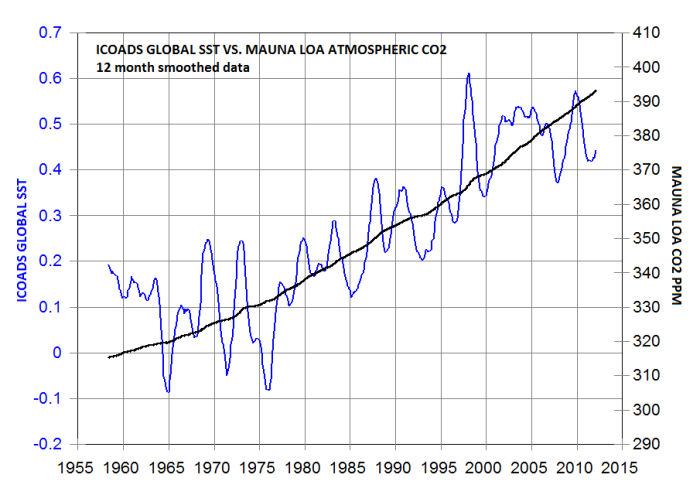 To illustrate the change in SST, I’ve added arrows to show the dramatic change in slope that occurred in the mid to late 70’s with SST.

The breakpoint in 1976/77 is known as the Great Pacific Climate shift, and was identified in a paper by Ebbesmeyer et. al in 1990.

In 2009, WUWT published a press release about the paper:

“The surge in global temperatures since 1977 can be attributed to a 1976 climate shift in the Pacific Ocean that made warming El Niño conditions more likely than they were over the previous 30 years and cooling La Niña conditions less likely” says corresponding author de Freitas.

“We have shown that internal global climate-system variability accounts for at least 80% of the observed global climate variation over the past half-century. It may even be more if the period of influence of major volcanoes can be more clearly identified and the corresponding data excluded from the analysis.”

So while CO2 emissions have certainly increased globally since 1958…so has the positive effect of ENSO. One has to wonder what the climate argument would be like today had the great Pacific Climate Shift not occurred. I’m betting that Dr. James Hansen would not have testified in 1988 about global warming, or need to turn off the air conditioner in the hearing room to dramatize his point, but likely would have been more concerned about cooling.