My business card gives my job title as “Generalist”. Let me give you an example of why this is an advantage in climate science. I worked for a while in the field of low-tech renewable energy. One of the things I did was to work with inexpensive solar water heating. Using solar energy to heat water can be extremely cost-effective. One of the reasons it can work cheaply is that it doesn’t require pumps. The water can be circulated while it is being heated using the principle of the thermosyphon. Here’s a diagram of how a thermosyphon works:

The reason the thermosyphon works is because a cold fluid is denser than a warm fluid. As a result, you get a pressure difference in the two legs of the system. This pressure difference works to constantly circulate the water. The water sinks on the cold denser side, and rises on the warm less dense side. Thermosyphon water systems are great in the developing world because they can be built very cheaply, using plastic pipe and 55-gallon drums.

If you’ve worked much with thermosyphon systems, you may have noticed that the system shown in Figure 1 is missing a critical component for successful operation. To work efficiently, the system needs a one-way valve to keep the circulation from running in reverse.

The reason it needs a one-way valve is that at night, the solar collector reverses function, and it becomes a thermal radiator. It radiates away the heat towards outer space. This makes the “Return” leg of the circuit (shown in red) colder and therefore denser than the “Advance” leg of the circuit (shown in blue). And absent a one-way valve, this of course reverses the circulation entirely.

Now, what does a reverse thermosyphon system have to do with the climate?

To elucidate that connection, consider the following situation shown in Figure 2. 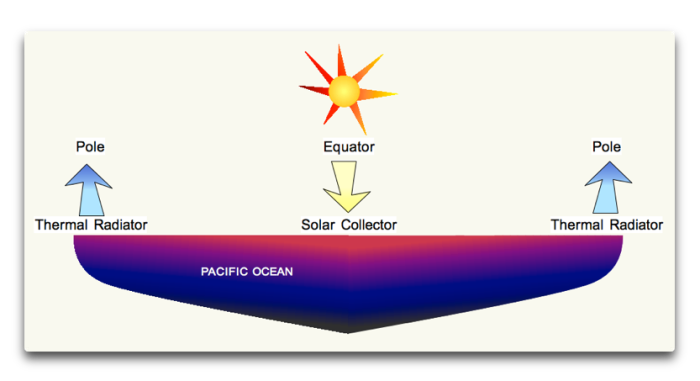 Figure 2. Incoming solar radiation and outgoing thermal radiation, Pacific Ocean. The north and south poles are at the right and left ends of the diagram, and the equator is in the middle.

In Figure 2, the sun is warming the surface layer of the ocean at the Equator. At the poles, on the other hand, very little solar energy is absorbed by the surface. Instead, the poles are areas of net radiation to outer space.

Now, considering what we know about reverse thermosyphon systems, in Figure 2 what would we expect in the way of natural thermal circulation?

Since the water is cooled at the poles it will be denser, while the sun-warmed tropical surface waters will be less dense. As a result, the water will sink at the poles and rise at the equator, as shown schematically in Figure 3. 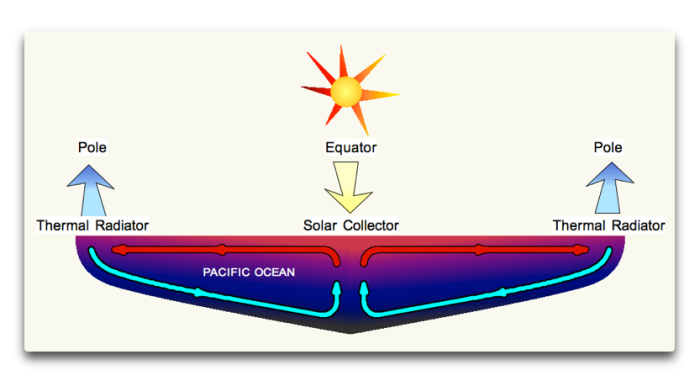 Figure 3. Simplified overall circulation pattern, Pacific Ocean. The north and south poles are at the right and left ends of the diagram, and the equator is in the middle.

This salinity difference only increases the strength of the circulation shown above. People sometimes ask why the oceans stay so cold when they are always being warmed by the sun. It is because there is a constant stream of very, very cold water being added to the bottom of the ocean by the thermohaline circulation.

To further complicate matters, there is a very small addition of geothermal heat moving upwards through the sea floor. Estimates put this warming on the order of a tenth of a watt per square metre (W/m2).

My back of the envelope number for ocean heating is as follows: one watt per square metre (W/m2) applied for one year will raise a cubic metre of sea water by about eight degrees C. Rough, but useful.

Now, with all of that as prologue, here’s the question of interest. It has been said that the reason that the warming is currently stopped is because the “missing heat” is hiding in the depths of the ocean … but that the surface layers have not warmed significantly. Many skeptics have said that this is simply not physically possible. They argue that because the ocean is heated from above, the heating would perforce be greater nearer to the surface. They claim there is no possible mechanism by which the deeper layers could warm independently of the surface.

So my question is, given the situation and circulation shown in Figure 3, what would be the effect on the average ocean temperature of a slight warming at the poles?

Regards to you all,

A Final Disclaimer: No, I do not think that the current plateau in the warming is caused by “missing heat” hiding in the ocean. And in any case I don’t think that we have the data to measure the ocean that accurately.

I’m just pointing out that yes, it is possible for the ocean to warm from the bottom up—you just need to turn down the volume or turn up the temperature of the polar leg of the thermohaline circulation.

The Consistent Request: If you disagree with someone, please quote their exact words so we can all understand your objection.

220 thoughts on “Things In General”