I keep reading how sunspots are supposed to affect volcanoes. In the comments to my last post, Tides, Earthquakes, and Volcanoes, someone approvingly quoted a volcano researcher who had looked at eleven eruptions of a particular type and stated:

Now that sounds very impressive, nine out of eleven eruptions came at an inactive solar phase, it must be a real phenomenon … or not.

The problem with this claim is the tiny number of data points, only eleven of them. In fact, nine events out of eleven is within the 95% confidence interval for a fifty/fifty coin flip. This means that despite sounding quite large, his finding is not statistically significant at all.

In any case, since these kinds of claims are made quite often, I thought I’d take a look at the question of whether sunspots affect eruptions. Doesn’t make sense to me, but lots of folks seem to believe it. I started by looking at the biggest eruptions, those with a volcanic explosive index (VEI) equal to five or greater. We’ve had nineteen of them since 1750. It turns out that no less than thirteen out of the nineteen occurred when the monthly sunspot number was quite low, below 40 sunspots … sounds impressive, right?

But a closer examination shows that the result isn’t all that impressive. Figure 1 shows the analysis of the VEI 5 and greater volcanoes compared to the sunspots. 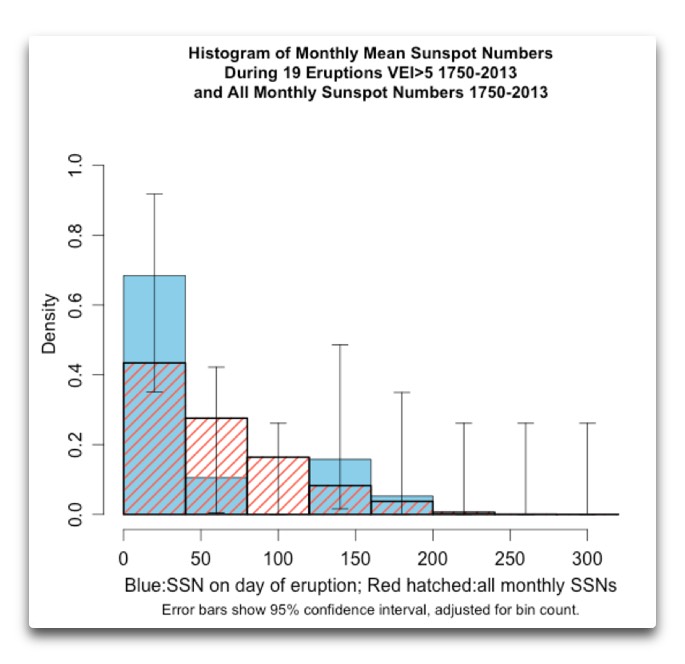 As you can see, this result suffers from the same problem as the “Nine of the 11″ claim above—the dataset is so small that you end up with very wide error bars. As a result, despite the fact that thirteen of the nineteen eruptions are in the range of 0-40 sunspots, and none of the results are in the range of 80-120 sunspots, neither of those outcomes is statistically significant.

So obviously, our sample size is too small to tell us much of anything. Let’s look at the next step down, those with a VEI of four or more.

Again, we see the same problem. While there are bins with more samples and bins with less samples, in no case are the results statistically significant.

Well, how about a bigger sample yet? Figure 3 shows the eruptions with a VEI of three or more. 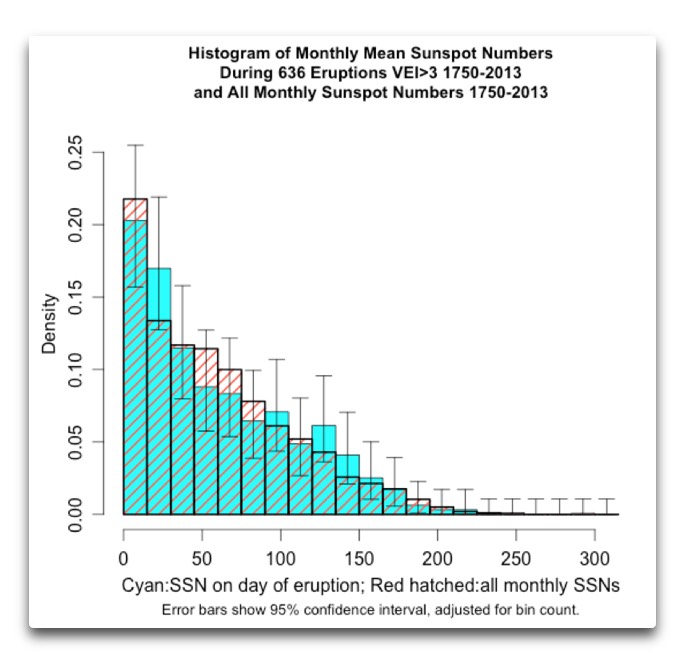 Well, it’s not looking any better. Still none of the bins show a statistically significant result. So at this point, lets look at every single volcano in the dataset.

OK, finally we have a couple of bins that are barely statistically significant, the ranges 120-135 sunspots, and 135-150 sunspots.

Now, does this result have meaning? Simple answer is, I don’t know. Here’s the problem. For whatever reason, volcanoes tend to occur in clusters. Here’s a graph showing what I mean regarding the early eruption data …

Figure 5. Graph of earlier eruption dates with each vertical line showing the date of one volcano.

And lest you think that this is just a function of sparse reporting in the early days, here is the more modern data:

Figure 6. Graph of modern eruption dates with each vertical line showing the date of one volcano.

As you can see, nature is naturally “clumpy”, with periods of more volcanoes and less volcanoes. Now I can think of several non-sunspot reasons for this clumping, including shifts in the tectonic plates, or sparse reporting, or repeated eruptions by a single volcano.

The problem arising from the clumped nature of eruptions is that the number of sunspots generally doesn’t change much month to month. The average monthly change in sunspot numbers is only about 13 sunspots. And this means that when we have a “clump” of volcanoes from whatever cause, say one volcano erupting five different times in six months, it will lead to a distortion of the sunspot record because it will incorrectly increase the numbers in that particular bin or bins.

Now, it’s unclear exactly how to adjust for this oddity. I could do it by increasing the size of the error bars using a Monte Carlo analysis … but I’d need to somehow replicate the exact nature of the “clumpiness” of the underlying data for my pseudo-random proxy data. And I haven’t yet figured out how to do that.

Finally, there has been a suggestion that undersea volcanoes are clustered in the early part of the calendar year. I can’t help with the undersea volcanoes, but to investigate a related claim, here is the histogram of the terrestrial volcanoes by calendar month: 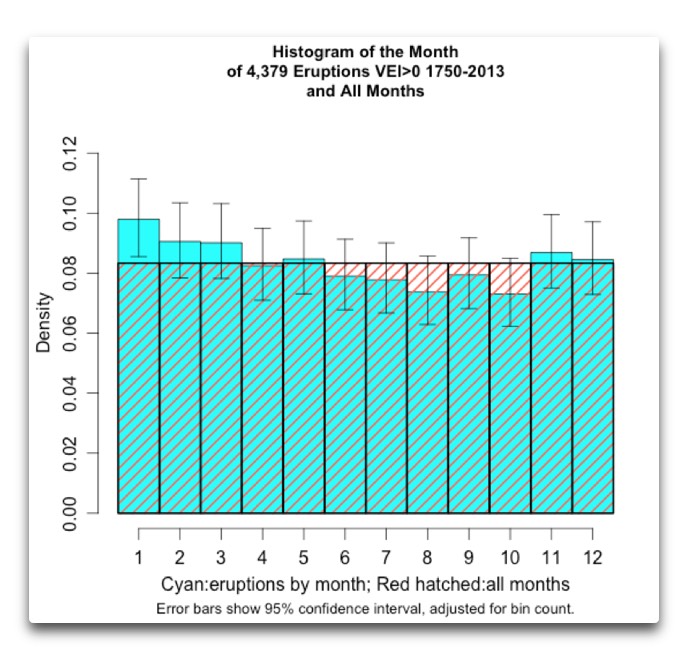 Figure 7. Histogram of the month of the occurrence of all recorded volcanoes since 1750. Counts have been adjusted to allow for the different lengths of the months.

There is one month (January) with a slight excess of eruptions. I ascribe this to the naturally clumped nature of volcanoes, although you are free to believe otherwise.

Overall? Well, I’d say that volcanic eruptions are not affected by sunspots, nor do they occur preferentially in a particular month or months. I’d also say that the researcher who seems so impressed by the “Nine of the 11 events …” claim needs to ponder the binomial distribution …

Regards to each of you, rain again here to ease the drought, life is good,

AND OF COURSE … if you disagree with someone, please have the courtesy to QUOTE THEIR EXACT WORDS so that we can all understand the exact nature of your objections.

111 thoughts on “Volcanoes and Sunspots”