As readers of my posts know, I’ve held for many years that there are a variety of emergent phenomena that regulate the earth’s temperature. See my posts The Thermostat Hypothesis and Emergent Climate Phenomena for an overview of my hypothesis.

One of the predictions derivable from my hypothesis is that the earth should be relatively insensitive to small changes in forcing. According to my hypothesis, if the total energy entering the system changes in such a manner that the global temperatures start to drop, inter alia the system responds through changes in the time and strength of the daily emergence of the tropical cumulus field and the associated thunderstorms. This allows more sunlight to enter the system and decreases the thunderstorm-caused surface heat losses, balancing out the energy lost elsewhere and maintaining the temperature.

In this regard, I got to thinking about the Berkeley Earth Land Temperature dataset. It is the longest observational global temperature dataset, stretching back to 1750. This gives me the opportunity to test my hypothesis against the volcanic eruptions that have occurred since 1750.

Now, the general belief is that volcanic eruptions cool the globe … but me, I don’t believe much of anything until I run the numbers myself. And I’ve run the numbers on the eruptions a number of times. I list my previous posts on the subject in the endnotes. But I’ve never looked at the Berkeley Earth record, so let me do that. Remember, if my hypothesis is correct, the volcanic eruptions should not cause a noticeable drop in the temperature.

Let me start with the Berkeley Earth land temperatures. Here is that dataset, along with a Gaussian average to show the underlying variations. 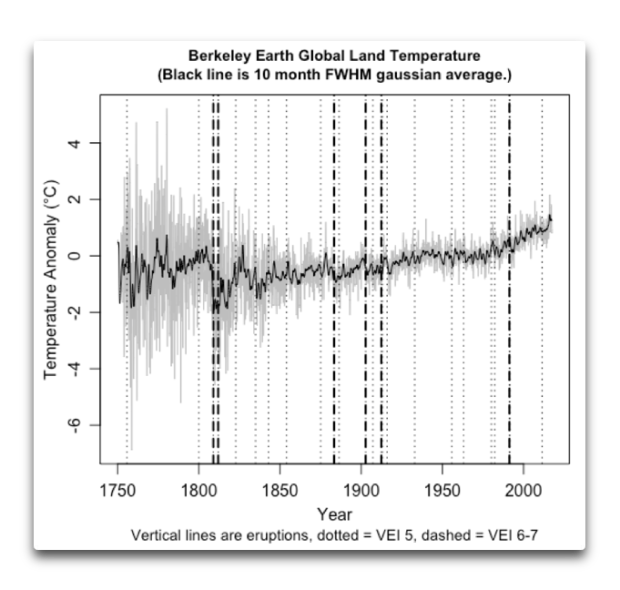 Figure 2. Stacked 24 largest eruptions since 1750. The black and yellow line shows the average of all 24 eruptions. All values are 10-month FWHM Gaussian averages.

As you can see, the prediction from my hypothesis is completely verified. On average there is no global temperature response to the 24 largest eruptions.

But wait, I hear you thinking, maybe it’s only the biggest ones that cause such a response. So I looked at the six largest eruptions shown in Figure 1 above, those with a volcanic explosivity index (VEI) of 6 or larger. Figure 3 shows that result.

Figure 3. Stacked 6 largest eruptions since 1750. The black and yellow line shows the average of all 6 eruptions. The blue line shows the only VEI 7 eruption in the group, Tambora in 1815.

Once again, the prediction from my hypothesis is confirmed. Even the largest six eruptions since 1750 do not result in any measurable global cooling.

The largest eruption, the VEI 7 eruption of Tambora in 1815 (blue line) is widely believed to be responsible for something called a “year without a summer” … but there is little sign of that in the Berkeley Earth dataset. It was just as cold thirty months or so before the Tambora eruption as it was after the eruption. I discussed this in a post called Missing the Missing Summer.

Well, I’d say that this is very strong evidence that the global temperature is not at the mercy of changes in forcing as is generally believed. Volcanic eruptions clearly and measurably reduce the incoming sunlight due to volcanic aerosols both reflecting and absorbing solar energy.

However, this does not cause a corresponding reduction in global average temperature. Instead, the climate system responds to reductions in forcing from eruptions by increasing the amount of energy entering the system, as well as by reducing the heat loss from the surface, in order to stabilize and maintain the surface temperature within a fairly narrow range (e.g. ± 0.3°C over the 20th century).

UPDATE: People in the comments said no, you’re not looking at the right volcanoes. You need to look at only volcanoes that put significant amounts of sulfates into the atmosphere … well, we are nothing if not a full-service website, so here’s that graph. I got ice core SO2 data from a paper called Variability of sulfate signal in ice core records based on five replicate cores. Here are all of the peaks that they identified since 1750 …

As you can see, even the high-sulfate eruptions don’t affect the global land temperature.

It’s a foggy morning here on the California coast. Two days ago it was blazing hot both here and in the California Central Valley, 108°F (42°C) in Sacramento. When that happens, the hot air rises, drawing the “marine layer” of cool air in off of the Pacific and causing today’s cool foggy weather at our house … the system responds to moderate the changes.

Best of sunshine, fog, weather, and climate to everyone,

NOTE 1: When you comment quote the exact words you are referring to, so we can all understand your precise subject.

NOTE 2: Data Sources. The Berkeley Earth data is here. The volcanic eruption data is from the Smithsonian. Enjoy.

NOTE 3: Some of my previous posts on volcanoes:

In the leaked version of the upcoming United Nations Intergovernmental Panel on Climate Change (UN IPCC) Fifth Assessment Report (AR5) Chapter 1, we find the following claims regarding volcanoes. The forcing from stratospheric volcanic aerosols can have a large impact on the climate for some years after volcanic eruptions. Several…

I was out trolling for science the other day at the AGW Observer site. It’s a great place, they list lots and lots of science including the good, the bad, and the ugly, like for example all the references from the UN IPCC AR5. The beauty part is that the…

[UPDATE]: I have added a discussion of the size of the model error at the end of this post. Over at Judith Curry’s climate blog, the NASA climate scientist Dr. Andrew Lacis has been providing some comments. He was asked: Please provide 5- 10 recent ‘proof points’ which you would…

I see that Susan Solomon and her climate police have rounded up the usual suspects, which in this case are volcanic eruptions, in their desperation to explain the so-called “pause” in global warming that’s stretching towards two decades now. Their problem is that for a long while the climate alarmists…

The claim is often made that volcanoes support the theory that forcing rules temperature. The aerosols from the eruptions are injected into the stratosphere. This reflects additional sunlight, and cuts the amount of sunshine that strikes the surface. As a result of this reduction in forcing, the biggest volcanic eruptions…

I have to learn to keep my blood pressure down … this new paper, “Abrupt onset of the Little Ice Age triggered by volcanism and sustained by sea-ice/ocean feedbacks“, hereinafter M2012, has me shaking my head. It has gotten favorable reports in the scientific blogs … I don’t see it at…

Richard Muller and the good folks over at the Berkeley Earth Surface Temperature (BEST) project have released their temperature analysis back to 1750, and are making their usual unsupportable claims. I don’t mean his risible statements that the temperature changes are due to CO2 because the curves look alike—that joke has…

Back in 2010, I wrote a post called “Prediction is hard, especially of the future“. It turned out to be the first of a series of posts that I ended up writing on the inability of climate models to successfully replicate the effects of volcanoes. It was an investigation occasioned…

There’s a recent study in AGU Atmospheres entitled “Proxy evidence for China’s monsoon precipitation response to volcanic aerosols over the past seven centuries”, by Zhou et al, paywalled here. The study was highlighted by Anthony here. It makes the claim that volcanic eruptions cause droughts in China. Is this possible?…

201 thoughts on “Stacking Up Volcanoes”