Even back in the 1970s, polar bears that spent the summer and early fall on the sea ice did not eat very often and some probably didn’t eat at all 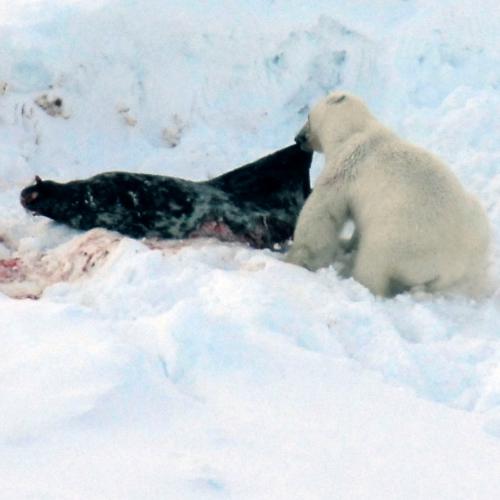 This is a polar bear with an adult hooded seal, which make up an increasing share of their food. The hooded seal can weigh up to 300-400 kg, so it is a large prey for the approximately 500 kg heavy polar bear. Credit: Rune Dietz, Aarhus University

We hear endlessly about the polar bears ‘forced’ to go without food for months because of receding summer sea ice — what about all the bears that stay out on the ice over the summer? Presumably, those bears keep hunting for seals – but how many do they actually catch?

As it turns out, not very many – and for some unlucky bears in late summer, probably none. While they probably eat a bit better in late fall, if they’re lucky and persistent, by the time winter comes, biologists assume most bears again eat very little. This explains why all polar bears are at their lowest weight in late winter (March), just before Arctic seal pups are born.

To put it another way, the reason that polar bears in some areas easily survive an onshore fast of 4 months or more over the late summer/early fall is that they would get very little to eat (if anything) even if they stayed out on the ice. It’s the fat put on in spring/early summer (from gorging on baby seals) that carries them over the summer, no matter where they spend it.

So why do some polar bear biologists and others (e.g. Stirling and Derocher 2012) keep insisting that if late summer sea ice retreats even more in the future than it has in recent years, polar bear survival will be seriously compromised because they won’t be able to eat?

“Summer is the limiting season because polar bears depend on sea ice as a platform to hunt seals. With summer and early fall sea ice losses, polar bears have less time on the ice, eat less, and become skinnier.”

Really? Take a look at the facts.