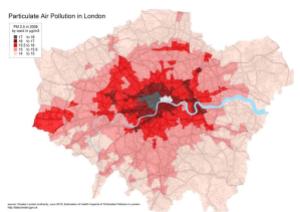 It’s the law of unintended consequences at work. European Union efforts to fight climate change favored diesel fuel over gasoline because it emits less carbon dioxide, or CO2. However, diesel’s contaminants have swamped benefits from measures that include a toll drivers pay to enter central London, a thriving bike-hire program and growing public-transport network.

Successive governments knew more than 10 years ago that diesel was producing all these harmful pollutants, but they myopically plowed on with their CO2 agenda,” said Simon Birkett, founder of Clean Air in London, a nonprofit group. “It’s been a catastrophe for air pollution, and that’s not too strong a word. It’s a public-health catastrophe.

Europe-wide policy triggered the problem. The “dieselisation” of London’s cars began with an agreement between car manufacturers and the EU in 1998 that aimed to lower the average CO2 emissions of new vehicles. Because of diesel’s greater fuel economy, it increased in favor.

114 thoughts on “Oops! 'Dieselification' of London due to CO2 regulations have increased actual air pollution”