UPDATE: the question has arisen about “occupied” aka “manned” weather stations in Antarctica (Stevenson Screens etc) versus the Automated Weather Stations. This picture on a postage stamp from Australia, celebrating the Australian Antarctic Territory in 1997, may help settle the issue. Note the Stevenson Screen near the “living pod” on the right.

Here is the larger photo of the first day of issue card, the Stevenson Screen is also just visible above the snowbank in the lower right. Rather close to human habitation I’d say. Looks like its in the middle of an AHI (Antarctic Heat Island).

Here’s another picture of a Stevenson Screen close to a building in Antarctica, from the British Antarctic Survey: 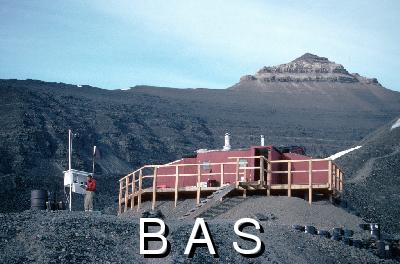 It seems that folks  are all “wild about Harry” over at Climate Audit, with the revelations occurring there, and no good kerfluffle would be complete without some pictures of the weather stations in question. It seems a weather station used in the Steig Antarctic study , aka “Harry”, got buried under snow and also got confused with another station, Gill, in the dataset. As Steve McIntyre writes:

2 February 2005 – Site visited. Site was difficult to locate by air; was finally found by scanning the horizon with binoculars. Station moved 3.8 nautical miles from the previous GPS position. The lower delta temperature sensor was buried .63 meters in the snow. The boom sensor was raised to 3.84 m above the surface from 1.57 m above the surface. Station was found in good working condition.

I didn’t see any discussion in Steig et al on allowing for the effect of burying sensors in the snow on data homogeneity.

The difference between “old” Harry and “new” Harry can now be explained. “Old” Harry was actually “Gill”, but, at least, even if mis-identified, it was only one series. “New” Harry is a splice of Harry into Gill – when Harry met Gill, the two became one, as it were.

Considered by itself, Gill has a slightly negative trend from 1987 to 2002. The big trend in “New Harry” arises entirely from the impact of splicing the two data sets together. It’s a mess.

So not only is there a splice error, but the data itself may have been biased by snow burial.

Why is the snow burying important? Well, as anyone skilled in cold weather survival can tell you, snow makes an excellent insulator and an excellent reflector. Snow’s trapped air insulative properties is why building a snow cave to survive in is a good idea. So is it any wonder then that a snowdrift buried temperature sensor, or a temperature sensor being lowered to near the surface by rising snow, would not read the temperature of the free near surface atmosphere accurately?

As I’ve always said, getting accurate weather station data is all about siting and how the sensors are affected by microclimate issues. Pictures help tell the story.

It seems digging out weather stations is a regular pastime in Antarctica, so data issues with snow burial of AWS sensors may be more than just about “Harry”. It seems Theresa (Harry’s nearby sister) and Halley VI also have been dug out and the process documented. With this being such a regular occurrence, and easily found within a few minutes of Googling by me, you’d think somebody with Steig et al or the Nature peer reviewers would have looked into this and the effect on the data that Steve McIntyre has so eloquently pointed out.

Here’s more on the snow burial issue from Antarctic bloggers:

The Gill AWS in question.

Theresa was placed at this location partly to

study the air flow in the region. Looking out the window of the plane we can

definitely see the air flowing!!! Jim estimates the wind at about 25 miles per

With the temperature around 0F the wind chill

was about 20 below, it is obvious this is going to be quite a chore.

Starting to dig out Theresa

The weather station has not been working, so

George needs to figure out what is wrong with it and then fix it. The station is

almost buried in the snow so we will also need to remove all of the electronics,

After refueling the plane, with the fuel in

the 55 gallon drums, Jim and Louie helped dig down to the electronics boxes that

in helping us not be so cold. After about 4 hours we are almost through. As I am

hanging onto the top of the raised tower in the wind, one bunny boot wedged onto

the tower bracing, the other boot wrapped around the tower, one elbow gripping

the tower, my chin trying to hold the wind sensor in place and both bare numb

the difficulty of what is normally Jonathan’s job. After checking to make sure

Notice the difference between this

picture and the first one of Theresa.

It’s been another flat-out week. The vehicle team have dug

up and moved the Drewery building, which was getting do buried snow was

almost up the windows. Team Met have been on the move too – all the

remaining instruments are now bolted securely to the Laws roof, so we headed

up the the Halley VI building site to relocate the weather station.

Only 15km away, the Halley VI site looks a lot like Halley V. It’s flat,

white and snowy. Very snowy. The weather station had about 1.5m built up

had to find a suitable replacement. Could this be Antarctica’s first

After an hour or so sweating it our with shovels, the weather station popped

out and was loaded onto the sledge. Like the reference point, the station’s

Weather station on the move

Driving on a compass bearing and GPS track, we found the new site just under

UPDATE: here’s another buried station story from Bob’s Adventures in cold climes. Apparently this station is used as a reference for some sort of borehole project.

My main task for today was to get a start on raising my weather station. I’d installed it 2 years ago, and with the high accumulation at Summit, it’s getting buried. The electronics are all in a box under the snow, and the only things visible at the surface were the anemometer for measuring wind speed and direction, the thermistor for measuring air temperature, and the solar panel to keep the batteries charged.

The buried weather station. The flat green bit is the solar panel, which was about 1.5 meters off the surface when I installed the station. Can you guess why I would mount it facing down?

In the morning I downloaded all the data from the station, and checked to see that it was all in order. Then it was time for digging. I’d carefully made a diagram when I inastalled the station, so I knew exactly where to dig. A couple of hours later I’d found my box!

At the bottom of the pit with the datalogger electronics.

The Australians seem to have AWS problems as well. From the Australian Antarctic Division:

On Monday two groups headed out, with Largy and Denis going up to the skiway to check on the condition of the equipment stored there for the winter and beginning preparations for the coming summer flying season.

Bill, Brian and Ian went up to the Lanyon Junction Automatic Weather Station (AWS) to check its condition and retrieve some of the sensors in preparation for the annual servicing of the various remote units.

And the University of Maine, participating in USITASE, has the same troubles, they write:

We reached our first major destination at the end of today’s travel, the site of the Nico weather station. There are several automatic weather stations spread out over the surface of Antarctica. These stations measure things like temperature, wind speed and wind direction and then relay this data back to scientists via satellite. Anything left on the surface of the snow will eventually be drifted in and buried by blowing snow. This particular weather station (NICO) has not been seen in several years. They tried to locate it via airplane a few years ago and were unsuccessful. Our task was to find the weather station, record its position with GPS, and mark the location with flags so that in the near future, the weather station can be raised and serviced.

We arrived at the coordinates of the station around 10 pm. Our initial scans of the horizon were not productive, so Matthew and John took the lead tractor (with our crevasse-detecting radar) out to survey a grid near our stopping point. The radar should detect a large metal object like a weather station, but the survey was also unsuccessful. After a fine pasta and tomato sauce dinner, John went outside for an evening constitutional. He saw a shiny object out in the distance – further inspection with a pair of binoculars determined that it was the top of the NICO weather station! Several of us marched out to the station, which was actually about a half mile distant, marked the location with bright orange flags and recorded the position via GPS for future reference. Only the top foot or two of the station was still visible. John was in exactly the right place at the right time to see a reflection from this object while we were near the kitchen module, and so allowed us to complete our first task successfully.

Tomorrow, we drive on.

This regular burial and digging out of stations brings the whole network of AWS stations to be used as sensitive climate measurement stations into question.