The Washington Post (WP) published a story detailing how the efforts by a Malaysian “coral gardener,” Anuar Abdulla, to restore coral reefs near his home have resulted in him being consulted on coral restoration efforts globally. Unfortunately, rather than simply delivering well earned praise to Abdullah for his worthwhile efforts, the WP had to turn the story into another in its on-going “Climate Solutions” series, blaming coral decline on climate change. This is false. Some corals have declined in recent years, others have expanded, and new colonies have been discovered. Of those that have declined, there is little support for any link to climate change, and a great deal of evidence pointing to other factors being behind local coral declines.

In the story, titled “One man’s lonely quest to save the world’s corals draws a following,” reporter Rebecca Tan writes:

For nearly four decades, the coral gardener [Anuar Abdullah] worked alone.Abdullah has spent his entire adult life restoring coral reefs, until recently working in obscurity — and at times, in poverty.

In a world rapidly losing its reefs to climate change and to environmental damage, he is now emerging as an increasingly influential expert on how to revive them. Governments and resorts have come calling, asking whether he can help with reefs lost to natural disasters and overtourism.

As discussed at Climate Realism, here, for example, corals are hardy and resilient. The first corals arose during the Cambrian Period about 535 million years ago and the number and type corals increased dramatically more than 400 million years ago, coming into existence when global temperatures and carbon dioxide concentrations were much higher than at present. Coral have proved adaptable, expanding their range, evolving, and thriving through periods of higher and lower temperatures than the Earth is either currently experiencing or can be reasonably expected to experience in the foreseeable future.

As discussed in Climate at a Glance: Coral Reefs, coral thrive in warm water, not cold water, and recent warming has allowed coral to expand their range poleward, while still thriving near the equator. Despite bleaching events, coral have expanded their range, and new coral reefs are discovered all the time. Science also shows that scientists have woefully undercounted the number or coral reefs and colonies in existence.

Nor, climate alarmists claims to the contrary, is there any evidence rising carbon dioxide levels are make Earth’s oceans and seas acidic. Since the oceans and seas are not becoming acidic, it is impossible for “ocean acidification” to be harming coral colonies.

If not warmer waters or ocean acidification, what factors are likely to have driven coral bleaching events in recent years. Tan named two of the culprits: natural disasters and overtourism. As explained in multiple Climate Realism posts other factors that have caused temporary or permanent damage to some coral colonies in various locations include: fishing and coral harvesting; coastal development and associated siltation and pollution; agricultural runoff; and pollution tied to sun block used by swimmers. While rapid influxes of warmer waters from natural shifts in ocean currents have caused temporary bleaching events on occasion, experience shows most coral recover from such events and multiple studies show corals can and do adapt to the gradual long-term pace of global warming.

Coral reefs are critical to ocean biodiversity. The world should be grateful for Anuar Abdulla’s efforts to restore coral reefs. He deserves all the praise he receives for this work. However, looking at coral reefs more broadly, in order to help coral reefs recover or make them more resilient to harmful impacts, one must first accurately identify the causes of their decline. The Washington Post, for the most part failed here. Because climate change isn’t harming coral reefs, trying to protect coral health by fighting global warming is a misplaced effort. Resources spent there, could be better applied to reducing or mitigating the true causes of coral losses—which, of course, is precisely what Abdulla is doing on a case by case basis.

Readers can also explore information about false alarmism applied to coral reefs on Everything Climate.

The most seawater could lose pH to a doubling of CO2 is about 0.15. The reason is that seawater is highly buffered, something alarmists ignorant of inorganic chemistry regularly overlook. And that small swing is well within the diurnal variation caused by photosynthesis in all fertile seas.

The extreme is winter pH 4.8 of brackish mangrove water at the mouth of the Everglades on Florida Bay, to a summer high of 9.6 on the other side of the bay near the Keys. The average width of Florida Bay is 25 miles, and it all thrives year round,

The problem is that there is no such homogenuous science as “climate science” and the study of climate requires a huge amount of information from various sciences. This is why people from various scientific disciplines can pick holes in the arguments of the self ascribed climate scientists because they are simply often out of their depth in their assertions.

5
AGW is Not Science
Reply to  Michael in Dublin

Of course, they’re “out of their depth” by design. They ate uninterested in learning anything that might challenge their CO2 fetish view of “climate.”

Acid rain, the ozone hole, fragile bird eggs, remote Pacific islands, Arctic tundra etc., environmental disasters as reported by the media seem to be always somewhere else, just under the surface, over there, you can’t see it but it’s there and it’s gonna gitcha. Coral reefs fit that scenario. The average person doesn’t see these damaged reefs and has to take their word for it. But the average person can observe their local weather and come to the conclusion that they’ve been lied to for the past 40+ years and figure out that what they’re being told about the reefs is probably a lie as well.

Low water over the reefs of that .59 square mile Island was one of several major reasons the cost was so high.

Counting the Japanese defenders and Korean laborers about 6,000 people died on and near the shore of that tiny island.

Their remains or partial remains are still being found to this day.

working in East Timor in 2005 I went diving at a couple of sites near Dili. The coral was Ok but not really spectacular. On the island of Anartuto however just 20 miles North of Dili the coral reef was quite massive but almost completely dead. Strangled in weed and mossy algae and pretty much devoid of life. The locals explained the reason. Dynamite fishing. Lob a stick of dynamite overboard and pick the stunned fish out of the water. Also using crowbars on the coral to pry out exotic fish for the aquarium market.
All teh sort of stuff that a real climate scientist would attribute to climate change. Anyone been there recently. The coral may have recovered

The coral will certainly recover, but it’s not like Lazarus who came back from the dead in just 4 days.

The best reference point is the coral reef at Bikini Island, which was totally obliterated by atomic bomb testing in the 1950s, but 60 years later was discovered to have largely regenerated back to its former glory.

Didn’t need any help from coral “experts” either.

Nor did “climate change” stop it from recovering from that very real (as opposed to imaginary) event. 🙄

Climate Change. What can’t it do? Now it’s causing my house foundation to have issues. https://web.archive.org/web/20221121120720/https://sgfcitizen.org/environment/climate-change-is-damaging-springfield-homes-spurring-big-business-in-foundation-fixes/

Expect the Greenies to blame it on the bazillions of tiny earthquakes they claim are being caused by Fracking….not kidding.

COP27 climate damages is just a fantasy plan to tax the West for bad weather and grow the UN
﻿https://www.cfact.org/2022/11/22/cop27-climate-damages-is-just-a-fantasy-plan-to-tax-the-west-for-bad-weather-and-grow-the-un/
By Joanne Nova |November 22nd, 2022 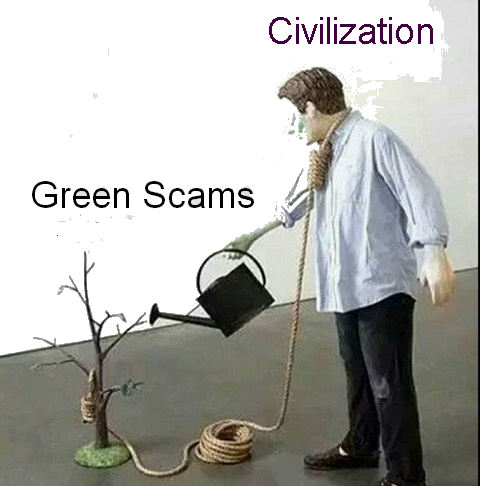 The image with the tree and a rope around a limb is cute — and wrong.

One wonders when tropical island natons will stop coral mining for limestone for construction projects and return to bamboo and coco huts instead.

I can’t help but think that the billions of dollars that’s going to the Great Barrier Reef has something to do with a laundromat.

Good article.
The fake ocean acidification crisis is just pseudoscience.
Craig Idso at CO2 Science has AUTHENTIC science based on empirical data that completely debunks it.

I’m an avid scuba diver, mostly in the Caribbean. Noticed the reefs of Curacao going to hell; but those of Cozumel thriving. Noticed the many many lionfish in both places — but very very infested in Curacao. Buddy and I asked if we could spear the lionfish in Curacao — we were reprimanded “no, u might get a “good” fish”. In Cozumel on the other hand, they ask the divers if they want to spear lionfish, and hand them the spearguns and sacks. And the Cozumel locals go out and nab the lionfish too. And, it is on the menu at many a restaurant in Cozumel. Whose reefs are healthier? Cozumel’s.

Not true;
there are vast amounts of cold water coral around the world, many are deep (found in depths of 360 to 1,600 meters), some are shallow, we have them around the UK, the famous Mingulay Reef Complex just 13km off the island of Mingulay Scotland, also on the seabed of fjords in Norway, the Southern Ocean.& even in the Arctic Ocean.

I was a coral gardener once in a different life. I was running a fleet of tourist & island supply boats in the Whitsunday Islands area of Queensland great barrier coast.

One of my responsibilities was the underwater observatory on Hook Island. The observatory had tables outside the windows 3 meters wide, which we kept stocked with coral, for the tourists to wonder at, but also to attract the colourful fish which were the real attraction. We had permits to collect coral from 10 sites on the outer reef. The tables needed some restocking about every 10 to 12 weeks, not because the coral died, but because the fish eat it.

We only used 5 of the collection sites as with 40 to 60 week cycle each area had regenerated enough for our last collection to be fully grown back. Fortunately the coral most attractive to tourists, & those favored by the fish were the fastest growing, so it was easy for a couple of divers to collect enough for our requirements in a couple of hours, with out doing any material damage to the corals.

Playing boats & running a tourist industry is a 7/52 job, & one does burn out even in a tropical wonderland, so I left the industry, but I do still miss those odd few days collecting & planting coral occasionally in the quiet times.