Reposted from the NoTricksZone

But that has turned out to be easier said than done. Greece now is putting lignite-fired power plants back into operation after a recent study by Greek electricity regulator RAE found the supply was at risk, especially in the cold winter months – due to the lack of reliable baseload power supply.

“With the rapid shutdown of the coal-fired power plants, electricity generation by gas-fired power plants in Greece rose to a total of 42 percent. However, Greece does not have natural gas reserves and therefore has to import the gas at a high price, making the price of electricity increasingly expensive and unaffordable for many Greeks.” reports Blackout News here. “Now the government is making a U-turn and wants to put the lignite-fired power plants that have already been shut down back into operation. For this reason, it is having the already dismantled power plants rebuilt.”

In 2019, the new Greek government had the brilliant idea of shutting down all coal plants and going green – but wound up having to burn expensive gas and realizing it was costing too much. In summary: Dismantle the coal plants, use something that doesn’t work, and now go back to coal: An expensive and totally unnecessary energy folly.

Still, the Greek government still aims to change over more to wind and solar and so has already passed a new law to reduce the approval process for wind farms on the islands in the Aegean Sea to 150 days instead of several years.

Yet Blackout News reports that environmentalists are critical of wind farms in the Aegean Sea, especially Greenpeace Greece, who complain there’s neither any real planning nor designated areas where wind farms could be built.

Moreover, wind park construction licenses were granted for the island of Amorgos. “However, the plants have not been built to date. The potential investors have probably lost interest,” reports Blackout News.

So until they figure it all out, coal will be keeping the Greeks warm and the lights on.

Back to the future!

Griff will be so disappointed.

… recycling does have its place. Yours was productive. Mine, not so much.

if only they had sunlight

if only they had sunlight

Please send your support dollars to me, via ApplePay, for this sage advice.
God will bless you, if you are generous

Shutting down coal by 2023, and going green by 2030. That would be 7 years of cold winters. Winters that will be getting colder in my opinion .
We are due to begin another cold period like in the 70’s when Lee on the Great Lakes was 3 ft thick and Lake Erie froze over completely .
This is what will stop the insanity of global warming caused by man ,and begins the hoax of a Glacial event caused by man .
Two years ago in the area of Silverton Colorado I saw baby glaciers developing that hadn’t been seen this century .. Last year they were half again larger. I didn’t go there this past Autumn to check, but it already has been a colder start to winter than usual .

Get photos, Doug. Then you have a dated record. Don’t even need an expensive camera, just one that date stamps your images.

This is what will stop the insanity of global warming caused by man ,and begins the hoax of a Glacial event caused by man

“….Greek electricity regulator RAE found the supply was at risk, especially in the cold winter months – due to the lack of reliable baseload power supply”

Left unspoken- the public had better get reliable baseload power or else- a switch in political parties, at best, revolution at worst.

The whole “renewable energy” scam is poorly planned, poorly executed, and failing. It’s nothing more than an exercise in virtue signaling with real world consequences. No testing or even basic engineering on the scale envisioned. California’s Ivanpah is a prime example.

I wish the “renewable energy scam” were merely “an exercise in virtue signaling”. In fact, it is an exercise in wind powered and solar powered subsidy farming, and my taxes are being harvested to contribute to the crop.

My stock portfolio thanks you.

What’s the difference between California and the Titanic?
The lights were still on as the Titanic sank..

Wait – huh???? Greece is using carbon to generate electricity??? What???

Okay, what’s really going on? Are we in one of those Twilight Zone episodes where everything seem real…. but isn’t? I mean, really, are we on another planet? Fakebook is admitting it lies in its teeth and Greece is firing up the furnace to keep the home lights burning.

I don’t think you are the one that’s confused, Sara.

I’m thinking, Sara, that this story gives us a little hope for the future of humanity. But I am an optimist, so maybe not.

Reality is a harsh mistress 😉

One can ignore reality, but one cannot ignore the consequences of ignoring reality. Ann Rynd.

Griff will be along any minute with an article from 2019 that proves that this is wrong and that Greece is dismantling coal plant.

Griff was kidnapped by Putin
He is shoveling snow in Siberia

Best place for him.

secretly then lease a huge fleet of industrial-grade diesel fueled generators to supply the reliable power that they just blew up? 🙁

An iconic chimney at Scotland’s last-remaining coal-fired power station (once the largest in Europe) has come crashing down earlier today as it was demolished.

And Greece barely needs heat in the winter while it is somewhat important in Scotland.

Griff and co. will assure us that Jockland will soon be as warm as Greece in the winter….

And that full flavoured Scottish red wine and mellow brandy will be challenging whisky as their main export.

Note that in the South East we struggle to do red wine as it just isn’t warm enough.

And they had First Minister Nicola ‘Sturgid’ press the button in front of the TV cameras. Hopefully that will soon come back to haunt her

Greenpeace Greece, who complain there’s neither any real planning

Hypocritical complaining of the lack of ‘real planning’ for wind generators just as reality has bitten them over the lack of planning on how to phase out fossil fuels in favour of renewables without causing this current energy disaster.

Good that Greece can fire them up again. Here in Ontario they destroyed our big coal plants….1/3 of our base load (Lakeview, Lampton, Nanticoke).

PIOMAS put out their November update today. It shows that the current sea ice volume is almost as high as the previous peaks of the last 3 years. The sea ice volume still has at least 3 months to go before it reaches a new peak. … http://psc.apl.uw.edu/wordpress/wp-content/uploads/schweiger/ice_volume/BPIOMASIceVolumeAnomalyCurrentV2.1.png 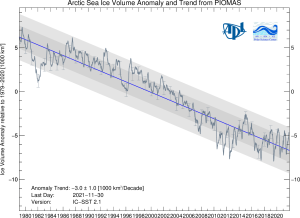 Fascinating that there is no data prior to 1980 and that the trend bottomed out at least a decade ago.

But Dave there is data going back much further than 1979-80. Check out this video from Tony Heller.

My point was that CliSciFi ignores Arctic ice data before 1980.

My grandparents came from the beautiful country of Greece to America a century ago. But wind & solar developments are destroying the magnificent countryside – Wind farm overkill to end Greece tourism once and for all | Wind Energy News (wind-watch.org) Tourism is a vital industry for Greece. Why would anyone want to degrade the magnificent viewsheds of Greece? Yes, they were foolish to dismantle their coal plants. Modern coal plants are extremely clean burning and should be a part of their fuel mix for their electrical grid. Our Russian friends supply Greece with a lot of gas and is ready to increase supplies: Russia will continue uninterrupted gas supplies to Greece, ready to increase them — Putin – Business & Economy – TASS Finally, the gas fields discovered in the Eastern Med present another opportunity to increase supplies as long as the Turkish government backs off of their imperialistic ambitions – Turkey-Greece tensions: eastern Mediterranean claims in maps (trtworld.com)

I find that learning by destroying is a valid method. The lessons are hard ones and tend to re-enforce the learning.

As it turns out, people like instantaneous electricity a lot. So much so that using it has become second nature to them. I’ll never forget one time when a power outage happened. I asked my wife to get a flashlight from the pantry, and she turned on the light switch when she went in to find it.

I drive my wife mad by leaving lights on, I grew up without electricity and didn’t have to switch lights on or off until I was in my 20s. The on part is still not ingrained as I can manage in the dark for a lot of things, but I hate sitting in the gloom and have every light I can on, once on I don’t switch them off even when I leave the room it’s not habitual yet, after 50 years

Should have followed the south Australian procedure and blown up the coal plants.

Greece is also going to fine the over 65’s 80+ euros, per month, if they have not been COVID-19 jabbed. Medical apartheid is strong in the EU zone.

That will work well in a country where paying tax seems to be optional.

In fascist Austria, failure to be experimented upon will get you a fine of over £3000 and doubling to over £6000. I presume there is no payout from the government if you join the over 600,000 in the EU with either permanent vax damage or ongoing problems due to it. I guess no amount of cash will help you if you are one of the 30,000+ killed by the vaccines.(numbers are official EU data)

Kaboom! Another country turns back to coal when faced with the Renewable Reality.

Greentardation: n. The astounding propensity of people, states, nations, and to a great extent the entire world to endanger economic security and threaten the health and lives of everyone, but especially of those less well off solely in order to follow (or appear to) an ideology based on lies. It is what allows entire nations to take actions without considering the consequences, which are well-known, of jettisoning time-tested, dependable, and reasonably priced sources of energy for other forms, the so-called “renewables”, which are the exact opposite. I mean really. What did they think would happen?

Once again Reality rears its ugly head. Until these greentarded morons are punished, personally and severely, this stupidity will not go away. Stupid has to hurt, otherwise stupid people will not learn.

Well done Greece! This is a reliable source of heat unlike electricity…

I will guess that they have some honest engineers with some courage now advising Greek electricity regulator RAE.

Maybe the CAGW band wagon can be stopped before too many lives and national fortunes are squandered.

Old King Coal Not Going “Gentle Into That Good Night”

Time Magazine: We Only Have to TRIPLE the Global Renewable Energy Budget to Achieve Green Nirvana

Old King Coal Not Going “Gentle Into That Good Night”

US Politicians Pin Green Hopes on a Geothermal Energy Breakthrough