From NOT A LOT OF PEOPLE KNOW THAT

The September of 1951 however was marked by frequent storms:

The daily record rainfall in Oxford has only been exceeded once since, in 1968.

I’ve experienced something like that shown in the picture above the title (more than once). Goldilocks is a fairy tale, except to socialists.

With the exception of the dramatic increase in atmospheric carbon dioxide, everything that is claimed to be caused by that increase has happened before or has been happening right along.

We don’t know the CO2 rise is unprecedented.
The resolution of the ice-cores can in no way guarantee that

We don’t know the CO2 rise is unprecedented.

Yes and also the method of analysis of ice core data has been challenged.

Weather has always been and always will be subject to change! A tiny bit more CO2 in the atmosphere is not causing any problems, rather it is greening up the planet and increasing harvest yields. Only ignorant fools or evil folks with hidden agendas continue to support the CAGW nonsense.

Try to remember the kind of September….

September in the UK has been one of the the least variable months in terms of temperature over the past 30 years. The standard deviation is +/-0.9C. Compare to December, for instance, SD = +/- 1.6C.

Thanks for those words of joylessness

Did you get that from the questionable Met Office?

Yabut, that was weather. Today we have climate.

1951 – Hmmm… I believe we were in Odessa, TX, and a cold snap hit us. My brother was still in diapers and stood on the register for the furnace to get warm, and got a hotfoot out of it because he had no shoes on. It was so cold that the windows frosted over (in Texas!) and sand blew in through the minor gaps between the window frames and the windows, which rattled loudly.

I remember when it snowed in Redlands, California in January of 1949. My parents and I made an ugly looking snowman out of the soggy inch or two on the ground.

1951 – was that the year Hurricane Hazel blew into SE Pennsylvania? They sent us home from school early because of the rain. Maybe not….

Well, apart from the fact that September 2021 was the second warmest September on record for the UK (record starts in 1884); whereas september 1945 was 15th warmest.

Had this September been the second coldest on record in the UK, I suspect the framing of this article would be rather different.

Thanks for the data link. It’s not quite as apocalyptic as you make out. The temp goes up, it goes down and it goes up again. And maybe starts to go down again.
I looked at the warmer months as well because that would be worst case. Similar pattern.

Key point is that the variation year on year is about half the total trend change over the whole 140 years. So the long-term trend is pretty much irrelevant when it comes to coping with what happens. Build infrastructure for the weather and the far slower climate changes can be ignored. They deal with themselves.

Graphed the late summer months. Will try to attach the images. Never tried that here before. 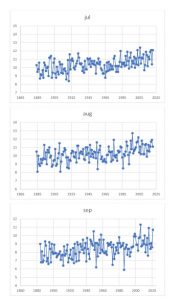 Quote:”Last month was pretty uneventful, pleasantly warm for the most part, with a couple of hot days thrown in. Not dissimilar in fact to September 1941″

Well, nooooo, not really “uneventful” at all

Judging from my flock of Wundergrounds, this September was quite exciting (##)
It was the 2nd warmest in the last 20 years, by quite a long shot. September 2006 left everywhere in the shade tho and Sept 2016 sometimes snook into 2nd place

What made it eventful was that warmth BUT, it was only over the days 5th thro 8th – which were very very warm. (Can’t have been a Sahara Plume coz no red dust but some serious heat blew in from somewhere)
It was just those 4 days that ‘made’ September 2021 therwise it would have continued a humdrum sort of English Summer.

What also made it ‘eventful’ was that it was very dry BUT and what the alarmists will latch onto were the thunderstorms.
Depending where your weather station was/is you could get 10 or 20mm rain inside 30 minutes but 5 miles away see only 0.25mm.
I watched it happen via lightning maps dot org and my 2 closest Wundergrounds.

They were very compact yet severe little storms. Perfectly predicted by Climate Science but there again, what isn’t?

## While doing my running average of the Wundergrounds I did start to doubt my sanity, this September averaged almost exactly the same temp as last month = August for all 7 of my little stations.
Spooky.

0
Sara
Reply to  Peta of Newark

It used to be, Peta, that we would have what was called an Indian Summer, which was the last warm day or two after the first frost of Autumn. I don’t know why anyone would object to using it, but it was something we all looked forward to, because when the warm days arrived after that cold snap, we could have a bonfire outside, roast hot dogs and marshmallow and corn on the cob, and have fun for a few days with no sweaters. Then it was back to chilly Autumn weather and rain, then sleet and snow and trick-or-treating for Hallowe’en.

Might have one this year, if the weather is right for it, but things sure have changed.

An interesting example of how variable UK weather can be. Whilst Oxford might have had a very wet day, the UK as a whole had pretty average total rainfall across September 1951. Whereas September 1950 was the second wettest September in the Met Office data set. Scotland had it’s wettest September by some margin in 1950, with 1951 also being below average. 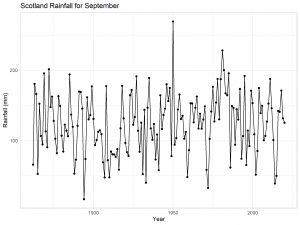 Multiple Deaths During the Recent I-90 Dust Storm: Why it Happened and How Such Tragedies Can be Prevented.

Study: Global Warming is Causing a DECLINE in Tropical Cyclones

La Nina is Not Going Away. What Does This Mean for This Summer’s Weather?

Classical Liberalism and Electricity: An (Unfinished) Exchange with Lynne Kiesling

The “Coming Climate Anarchy”… Run Away!!!