Sea ice across the Arctic in the first week of February is a mix of highs and lows. Bering Sea is back up to almost normal coverage, as is the Barents Sea. However, ice coverage on the East Coast of Canada is the lowest its been in four decades. This is not yet a worry for polar bears because harp seals don’t pup until mid-March in this region so there is at least four weeks of potential ice growth that can happen before the seals are forced to pup on much reduced ice – where polar bears are sure to find them.

Here is a close-up look at sea ice conditions by region at the edges of the Arctic.

All of the ice coloured brown in the chart below from the Alaska Sea Ice Program for 10 February is multi-year ice while the yellow and green is first year ice:

Few polar bears venture into the Bering Sea on their hunt for seals, which means low ice over the Bering Sea in winter and spring is not the end of the world for the bears. The Chukchi Sea, north of the Bering Strait, is their primary habitat.

After low ice coverage since mid-summer, ice coverage is back up in early February (above), with more ice off the west coast of Novaya Zemlya than there’s been in years and Svalbard ice is back up to almost ‘normal’ levels (below):

You’ll see from the graph below from the Norwegian Ice Service that sea ice is back up to where it was in 2020 and much higher than it was in 2012.

As a consequence, it’s not surprising that ice has again reached Bear Island (Bjørnøya) to the south of Svalbard (below) although earlier than it did in 2020 (yellow line in graph above): ice reached the island a few days before 8 March when a polar bear was spotted by the crew of the Meteorological Station:

All the red in the chart below is ‘much less’ ice than usual in the Gulf of St. Lawrence and off Labrador and Newfoundland:

For the first week in February, this is the lowest that ‘East Coast’ ice has been since 1981. In a future post, I’ll address the issue of whether or not harp seal pupping (which occurs about mid-March) is likely to be impacted by such low ice levels.

Here is a closeup from the Canadian Ice Service showing the pitiful amount of ice present for the week of 8 February 2021 over the East Coast:

For comparison to the above, below are the same charts for 2018 (a fairly heavy ice year), same week (light green is thin first year ice, 30-70 cm thick):

The lower than usual sea ice in Baffin Bay is the flip side of the below normal cold in Europe, USA and Siberia.

A warmer than usual patch has been sitting over the Baffin Bay region for a few weeks now.

Outside the Arctic Ocean on the other side, The Sea of Okhotsk is 2nd highest its been in 15 years.

I see NASA has a video ‘Disappearing Arctic Ice’. Says it all.

It is good of NASA to give an explanation of why they do that. They have a well earned reputation to maintain. They always manage to come up with things completely out of this world 🙂

Another study shows that Icelandic sea ice and glaciers have been at their highest (in 2500 years), within the last 200 years. 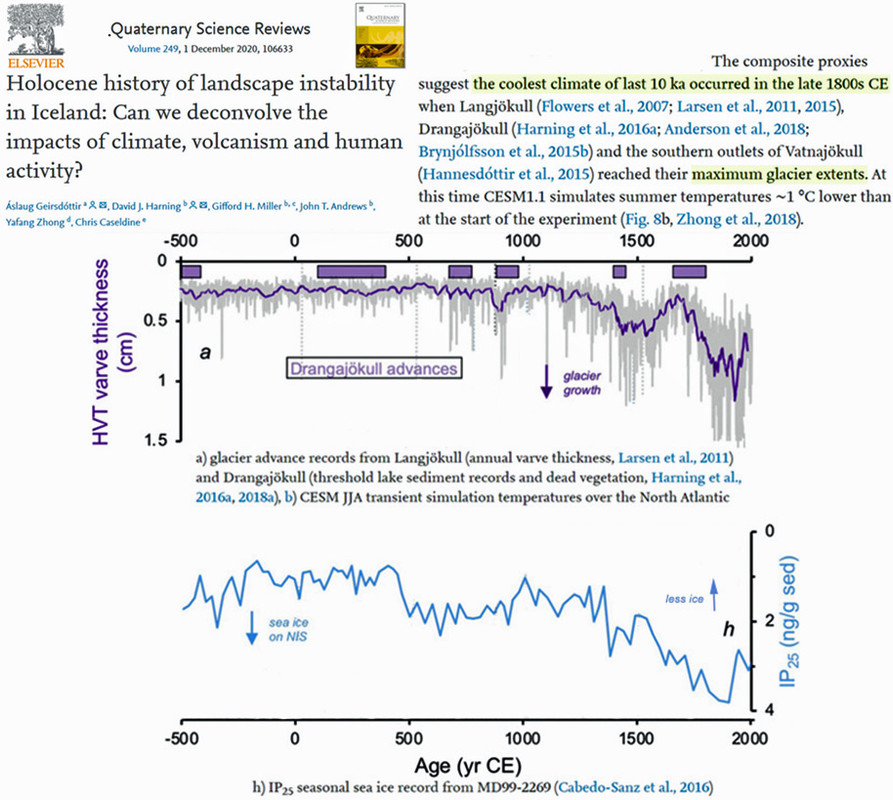 What we have currently, is only a slight recovery from that highest extent in at least 2500 years.

The anomaly was the LIA and late 1970s, we currently have a slight return towards “normal”.

The cooling trend of the past at least 3000 years is intact. The Modern Warm Period, like the Medieval and Roman Warm Periods, were counter-cyclic excursions from the secular temperature downtrend. So the Greek Dark Ages, Dark Ages and LIA Cool Periods were the secular trend cycles. Sadly, Earth is headed out of the current interglacial back toward another glacial, ie big ice age, whether in 3000 or 30,000 years, depending upon which Milankovitch cycle you think rules.

I wonder what the harp seals think about this report?

This is a welcome report and the graphics are superb.

“You’ll see from the graph below from the Norwegian Ice Service that sea ice is back up to where it was in 2020 and much higher than it was in 2012.”

Too much sea ice, like during the LIA and late 1970s, is an absolute nuisance for all Arctic creatures, sea and land.