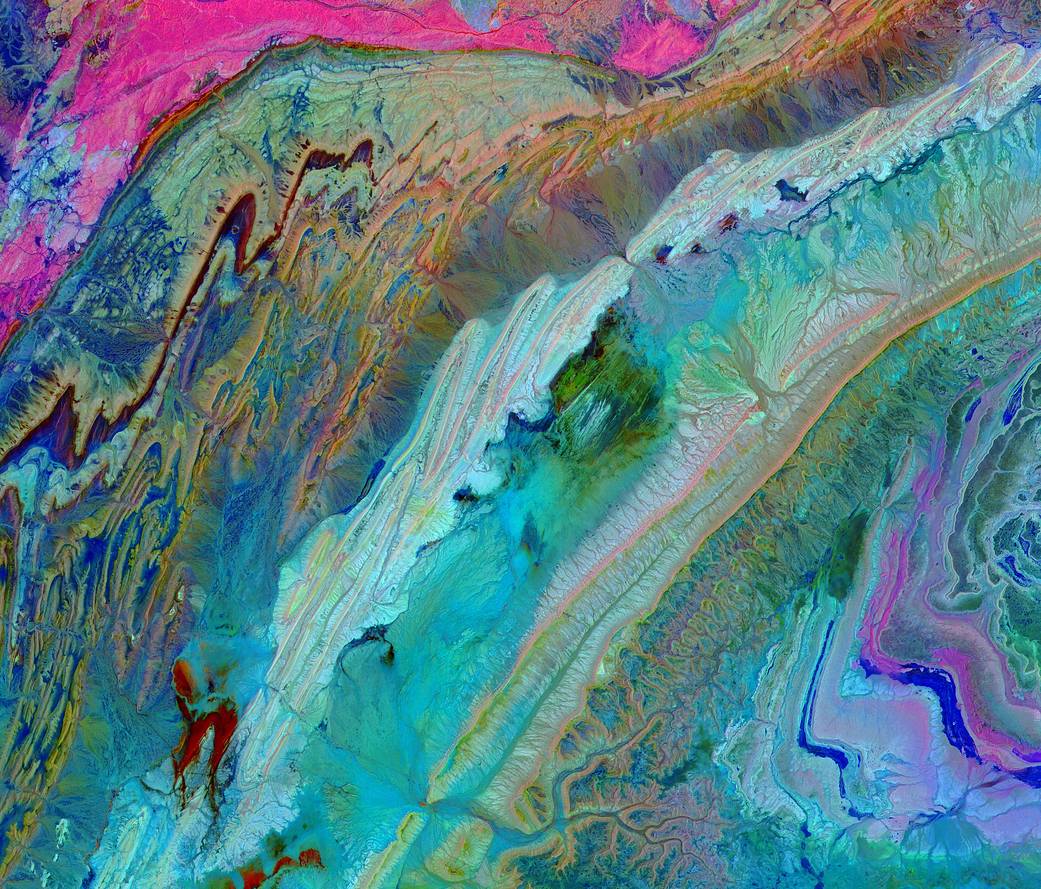 The Anti-Atlas Mountains of Morocco formed as a result of the collision of the African and Eurasian tectonic plates about 80 million years ago. This collision destroyed the Tethys Ocean. The limestone, sandstone, claystone and gypsum layers that formed the ocean bed were folded and crumpled to create the Anti-Atlas Mountains. In this image of southwest Morocco, visible, near infrared and short wavelength infrared bands are combined to dramatically highlight the different rock types, and illustrate the complex folding. The image was acquired on November 5, 2007, by the ASTER instrument on the Terra satellite.

Terra launched 20 years ago in December 1999, beginning a new era in the study of Earth. Terra, flagship of the agency’s Earth Observing System, was built to last for six years and 30,000 orbits.​ But, 20 years later Terra and its five onboard instruments continue on a mission of discovery, providing data about the planet we call home.

On the other site of the Mediterranean colision of the plates created Dinaric Alps. One single rock not far from my home vividly shows many millions of rock creation and dramatic movement as so clearly shown in this ‘petrologists delight’ photo
http://www.vukcevic.co.uk/Raf-rock.jpg

Vuk, where is this?

That “Rocks”. Just imagine the energy over millions of years to push semi-molten rock back and forth t make all those layers.

It is not volcanic rock, it is sediment limestone composed mainly of calcium carbonate (CaCO3) and skeletal fragments of marine organisms. Most of older local houses are built by using limestone rocks, heated to red-hot high temperature limestone, which when cooled turns into a white powder and mixed with water makes slow setting but strong lime plaster is used as mortar.

It was seeing metamorphic exposures of similar complexity and structure in the Grenville province in Ontario Canada that convinced me to become a geologist back in 1970. It’s been endlessly interesting.

That stuff is called “flysch” (Alpinr geology/European derivation) and here’s a definition. Any who live in coastal California, Oregon see similar rocks. “Flysch is a sequence of sedimentary rock layers that progress from deep-water and turbidity flow deposits to shallow-water shales and sandstones. It is deposited when a deep basin forms rapidly on the continental side of a mountain building episode. Examples are found near the North American Cordillera, the Alps, the Pyrenees and the Carpathians.”

Nice imaging! We live on a very dynamic planet. Thanks!

But it is a hard subject.

Hi David, hope you had good Xmas.
In the photo of the rock I linked to further above, there are above the road surface (there might be more below) about 60 what I believe could be Jurassic limestone sedimentation.
Is there any enlightening comment , as a geologist, you might be able to add by just looking at the photo?
p.s. more detail can be seen in this Google view link

That is a cool picture. My first guess would be an outcrop of layered clastic rocks, ~45° dip, with a couple of clear fault cut exposures.

My wife, also a geo, noted that it looks like a compressional feature, resulting from an overthrust.

David, thanks.
Thank you too, John
” Budva Zone which has a rather condensed column comprising Lower Triassic sediments; next, Middle Triassic rocks with Anisian flysch and Ladinian volcanics in one part of the terrain, and carbonates in the rest of it. The locally missing Upper Triassic is followed by the neritic Jurassic. The thin Lower Creaceous, sometimes even absent, is overlain by Cenomanian-Senonian limestone and predominantly Oligocene flysch.”
Now I should know, but it may take some ‘googling’ time to decipher all that.

David: I agree with your wife. It looks like “nappe structure” exactly what you would get with foreshortening caused by continental collision.

Great picture, indeed.
However, it would be good to mention that the Anti-Atlas Mountains are originally a product of the Alleghenian Orogeny, uplifted 200+ Ma later, during the Alpine Orogeny.

Tectonics of the Anti-Atlas of Morocco

I had never heard of the Anti-Atlas mountains.

I’m reminded of an old bon mot: It’s God’s country, ’cause nobody else wants it.

One thing in the wiki article made me sit up and take notice.

Evidence shows that the Anti-Atlas mountains were originally formed as part of the Alleghenian orogeny that also formed the Appalachians, …

That is right, the age of Anti-Atlas is not about 80 My, but belongs to Paleozoic and Precambrian. It is the oldest land in Morocco.

Rocks on the Atlantic Coast here match with those on the western side of the Atlantic on the coast of Newfoundland.
From memory, but you can look it up.

Here is a nice schematics of the space craft:
https://www.nasa.gov/mission_pages/terra/spacecraft/index.html

The picture certainly shows the delicate touch of Slartibartfast.
Maybe he was getting bored doing the fiords.

The Anti-Atlas Mountains of Morocco formed as a result of the collision of the African and Eurasian tectonic plates about 80 million years ago.

Atlas, Anti-Atlas, Matterhorn, rocky mountains – to get a feeling for “Natural Monuments”

think of the room you’re sitting in, sojourn. Then think of a carpet frizzing in the room above you.

The ruffles of the carpet relate to the “Natural Monuments”, while the height of the room relates to the thickness of the subducting zone.

Understatement, sure. Everyone feel free to correct me where I’m wrong.

The Earth Has a Pulse: 27.5-Million-Year Cycle of Geological Activity Discovered

Exploring the evolution of Earth’s habitability regulated by oxygen cycle

The Water Planet Earth And Its Climate

Claim: Democrats Stayed True to Climate Action Because They Resisted Offers of Money

Claim: Antarctica’s Ice Shelves Could be Melting Faster Than We thought

A Drought in Germany Gets the Media Overexcited