Hubble Finds Medusa in the Sky

Often referred to by its somewhat drier New General Catalogue designation of NGC 4194, this was not always one entity, but two. An early galaxy consumed a smaller gas-rich system, throwing out streams of stars and dust into space. These streams, seen rising from the top of the merged galaxy, resemble the writhing snakes that Medusa, a monster in ancient Greek mythology, famously had on her head in place of hair, lending the object its intriguing name.

The legend of Medusa also held that anyone who saw her face would transform into stone. In this case, you can feast your eyes without fear on the center of the merged galaxy, a region known as Medusa’s eye. All the cool gas pooling here has triggered a burst of star formation, causing it to stand out brightly against the dark cosmic backdrop.

The Medusa merger is located about 130 million light-years away in the constellation of Ursa Major (the Great Bear).

Now that is Real Science.

Huuummm, ….. looks to me like something “out of sight” at the bottom right …. is sucking the guts out of that galaxy. 🙂

I love this stuff. More please. 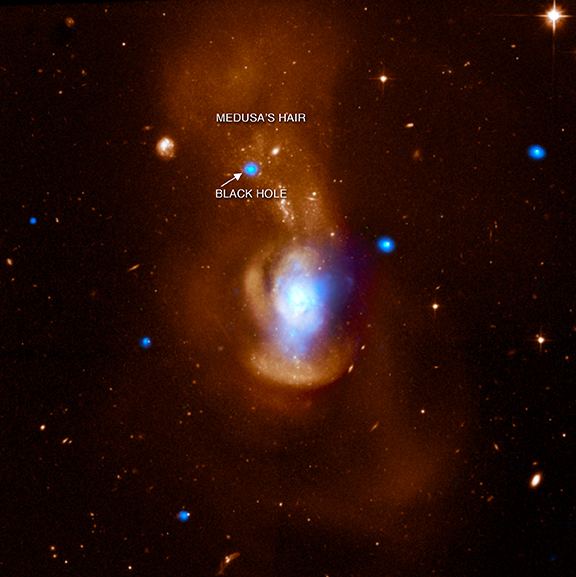 So if he 2 merging galaxies had central black holes, what happened to these?

Eventually they would merge and possibly a Quasar would light up.

Is that REALLY a black hole marked on the JPG? Or do they ASSUME it’s one?

Better to be here than there

My thoughts have been that black holes are galactic regenerators.

Could be what the Milky Way – Andromeda merger will look like in 5 – 6 billion yrs. Common occurrence in the cosmos.

maybe the original discoverer speaks spanish. to me it looks more like a jellyfish, and the name of the jellyfish in spanish is medusa.

To me it looks more like a gas engine with a fan on the front and carburetor on top, and fumes spewing from behind. lol

” An early galaxy consumed a smaller gas-rich system, throwing out streams of stars and dust into space.”

That’s what they assumed happened, but it’s stated as fact. Could very well be totally wrong.

What would be the distance (roughly) between the far upper left and far lower right of that formation? Also, that yellow object in the lower right looks interesting. Has that been described?

Just guessing, but it’s yellow (unlike the surrounding material), so prb’ly considerably red-shifted, and so a distant galaxy.

“An early galaxy consumed a smaller gas-rich system, throwing out streams of stars and dust into space. These streams, seen rising from the top of the merged galaxy, resemble the writhing snakes that Medusa, a monster in ancient Greek mythology, famously had on her head in place of hair, lending the object its intriguing name.”
____________________________________

Well said. So this is the origin of the Ancient Greeks’ presentation of “Medusa” – a picture that actually depicts the mental state of fatalism.

That fatalism which led to the downfall of the ancient Greek Empire.

The mental state that apparently dominates the Middle East till today.