Science! As in she blinded me with

WTF is a “a safe global climate”?  Is that a climate with puppies and a crying room?  Who writes nonsense like this?

Linkedin also notes that she was a reporter for Platts from 2007-2010.  So her energy and science credentials are: 3 years at Platts and having attended the same university where Don Easterbrook (author of my geomorphology textbook) is an emeritus professor.

Anyway… On to the No Schist Sherlock bits…

The United States, which has declared a retreat from the Paris accord, is represented in South Korea by Trigg Talley, director of the State Department’s Office of Global Change.

In comments obtained by E&E News, the United States and other countries took issue with 66 elements of the draft summary prepared by scientists.

The United States complained that the report focused too much on sustainable development, which is “beyond the mandate given the authors of the report and beyond the mandate of the IPCC itself.” It admonished the authors to play up areas where it said there were “significant uncertainties,” including on core scientific questions of climate sensitivity and the so-called carbon budget, or the amount the world can still emit while staying within a certain range.

The United States also noted that global poverty has lessened in the last few decades as fossil fuel use has “exploded” in the developing world.

“The report and SPM do not present a balanced assessment of the economic, social and development costs associated with the trade-offs of pursuing actions consistent with limiting global warming to 1.5 C,” state the comments, which would have been prepared by the State Department with sign-off from the White House National Economic Council.

“Too often,” the comments continue, “authors dismiss tradeoffs as being solvable by using redistributive policies or by pursuing actions that are deemed consistent with sustainable development.”

There you have it.  The Trump administration objects to Marxism… And therefore deplorable… No schist Sherlock!

“This is the first time in the history of mankind that we are setting ourselves the task of intentionally, within a defined period of time, to change the economic development model that has been reigning for at least 150 years, since the Industrial Revolution.”

How about that uncertainty?

Here  are the RSS satellite temperature data and a suite of climate models: 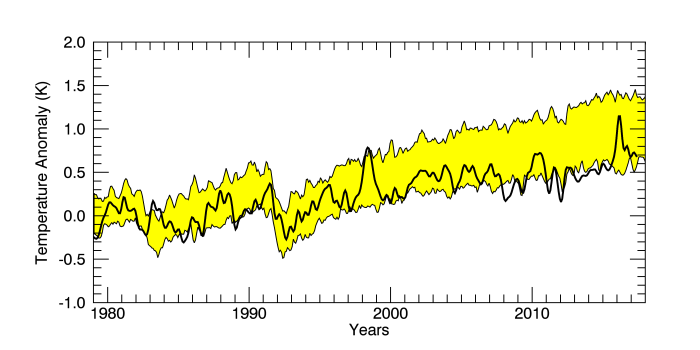 “Fig. 1.  Global (70S to 80N) Mean TLT Anomaly plotted as a function of time.  The black line is the time series for the  RSS V4.0 MSU/AMSU atmosperhic temperature dataset.  The yellow band is the 5% to 95% range of output from CMIP-5 climate simulations.  The mean value of each time series average from 1979-1984 is set to zero so the changes over time can be more easily seen.  Note that after 1998, the observations are likely to be in the lower part of the model distribution, indicating that there is a small discrepancy between the model predictions and the satelllite observations.(All time series have been smoothed to remove variabilty on time scales shorter than 6 months.)” Remote Sensing Systems

95% of the model runs predicted more warming than the RSS data since 1988… And this is the Mears-ized RSS data, the one in which the measurements were influenced to obtain key information (erase the pause and more closely match the surface data).

Their “small discrepancy” would be abject failure in the oil & gas industry.

The observed warming has been less than that expected in a strong mitigation scenario (RCP4.5). 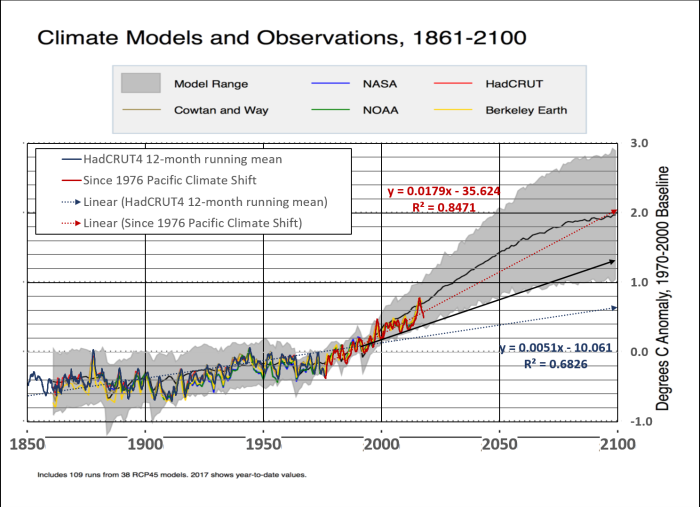 Output of 38 RCP4.5 models vs observations.   The graph is originally from Carbon Brief.  I updated it with HadCRUT4, shifted to 1970-2000 baseline, to demonstrate the post-El Niño divergence.

RCP4.5 is a strong mitigation scenario with the atmospheric CO2 concentration leveling off below 540 ppm in the second half of the 21st century.

RCP 4.5:
The RCP 4.5 is developed by the MiniCAM modeling team at the Pacific Northwest National Laboratory’s Joint Global Change Research Institute (JGCRI). It is a stabilization scenario where total radiative forcing is stabilized before 2100 by employment of a range of technologies and strategies for reducing greenhouse gas emissions. The scenario drivers and technology options are detailed in Clarke et al. (2007). Additional detail on the simulation of land use and terrestrial carbon emissions is given by Wise et al (2009).

The MiniCAM-team responsible for developing the RCP 4.5 are:

Regarding “climate sensitivity,” the only question is: How low does it have to get before the IPCC and UNFCC have to close up shop and get real jobs?

Regarding the value of fossil fuels

It’s the biggest No Schist Sherlock in the history of the Vishnu schist. 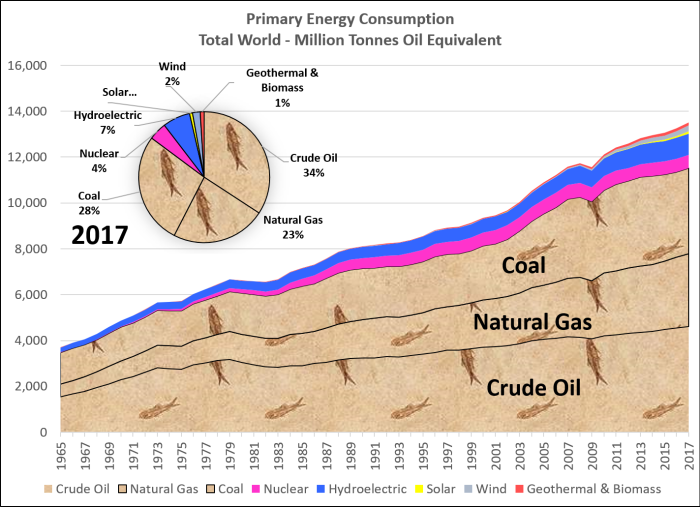 Trends in human population and nitrogen use throughout the twentieth century. Of the total world population (solid line), an estimate is made of the number of people that could be sustained without reactive nitrogen from the Haber–Bosch process (long dashed line), also expressed as a percentage of the global population (short dashed line). The recorded increase in average fertilizer use per hectare of agricultural land (blue symbols) and the increase in per capita meat production (green symbols) is also shown. Erisman et al., 2008

A retreat from the Paris accord?

It’s appropriate that these climate talks are being held in Incheon (Inchon), Republic of Korea.  The 1st Marine Division under General Smith landed at Inchon on September 15, 1950 and advanced all the way to the Chosin Reservoir in the DPRK (North Korea) by December.  It was there that they were forced to advance in a different direction in the face of an onslaught by Communist Chinese forces, which outnumbered them 4:1.