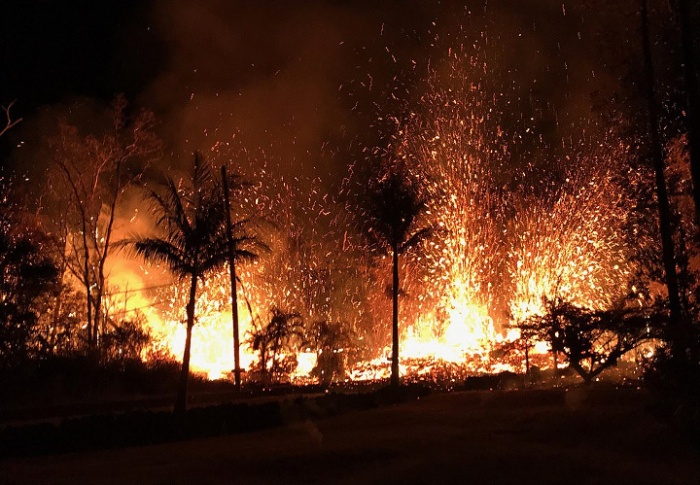 Puna Geothermal Venture has removed 60,000 litres gallons of flammable Pentane from a geothermal plant in the path of the Hawaii volcanic eruption. But concerns remain that if the geothermal wells break, they could flood the neighbourhood with toxic volcanic gasses.

PAHOA, Hawaii — The dangers of building a home on the skirt of an active volcano have become quite clear in recent days, as residents here have needed to evacuate from neighborhoods around Kilauea to avoid the lava flows and toxic gases that have emerged from numerous fissures.

But the advancing molten rock — and the potential for future eruptions and ejections of boulders — threatens more than the homes. Nearby, nestled between two neighborhoods, is a geothermal plant that is home to thousands of gallons of flammable chemicals and deep wells that pose serious risks if they overheat or are breached.

Long a concern for residents and the target of lawsuits challenging its placement on an active volcano, the Puna Geothermal Venture (PGV) is a major safety issue in the wake of the eruptions and earthquakes that have shaken the Big Island for days, government officials say. Authorities worry that the seismic activity could cause gas leaks or explosions at the plant, which is near fissures that have broken the surface. Before dawn Thursday, PGV employees removed a large reserve of pentane — 60,000 gallons of highly flammable solvent used in the powering of wind turbines — because of fears that it could leak and ignite.

Residents and officials remain concerned about potential explosions and toxic gas leaks from the underground wells that provide heat for energy production. If the wells break, they could release dangerous gas — including colorless, flammable and toxic hydrogen sulfide — into the area around Leilani Estates and Lanipuna Gardens, the evacuated neighborhoods that already are choked with volcanic fumes.

“Volcanologists know there is magma under and around the geothermal well fields,” County of Hawaii Council member Jennifer Ruggles, who represents western Puna, said in a statement Thursday night. “The magma is moving and it is unpredictable. There is a real risk that the wells could be damaged.”

I’m shocked to learn geothermal plants use Pentane in such quantities. Pentane is a heavier than air unbreathable hydrocarbon gas low boiling point liquid, very similar to though slightly heavier than butane and propane. A potential suffocation risk if released in large quantities, in addition to the risk of explosion. Hydrogen sulfide is also very nasty, even small concentrations can incapacitate and kill in minutes.

Correction (EW): 1. The quantity was in gallons, not litres (h/t R. Shearer).

2. Pentane is a low boiling point liquid, whose boiling point ranges from 9C (48F) to 36C (97F) depending on isomer (h/t Phil), so less of a suffocation risk than I thought, unless heated above room temperature…