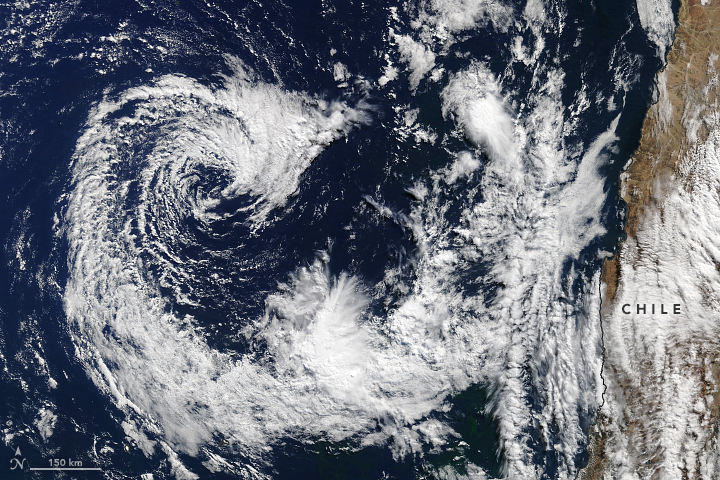 An extremely rare cyclone formed in early May 2018 about 160 kilometers (100 miles) off the coast of Chile—an area that almost never sees tropical cyclones. This image was acquired on May 9, 2018, by the Moderate Resolution Imaging Spectroradiometer (MODIS) on NASA’s Terra satellite.

Cyclones are not typically found in this region because sea surface temperatures (SSTs) in the southeastern Pacific Ocean are usually too cold. The oceanographic process known as upwelling tends to bring cold water up from the deep ocean along the Chilean coast. (Similar conditions prevail offshore from California in the northern hemisphere.)

SSTs in the vicinity of this cyclone were just under 20 degrees Celsius (68 degrees Fahrenheit) in May 2018,according to NOAA satellite data. Meteorologists have determined that temperatures generally should be about 27°C to develop and sustain most cyclones. Despite the colder waters, the cyclone still formed due to favorable atmospheric conditions, with wind speeds similar to a weak tropical storm.

That’s a pretty pathetic excuse for a “cyclone”.

+1
“with wind speeds similar to a weak tropical storm”

Good point. “Tropical” cyclones are supposed to require 25 degree C water to form. That’s not unknown outside the tropics, but this weakly organized depression might have gotten itself together in even cooler water.
The Humboldt Current from Antarctica to the Galapagos is one of the coldest on Earth, but warmer water pools just to its west.

0
Bryan A
Reply to  Felix

JMac, as a fellow swimmer, I would call “refreshing” an understatement 🙂
68F is cold!
What a lot of non-swimmers don’t realize is that our cold shock response start in water as “warm” as 78F, which is incredibly counter-intuitive. That’s why so many boaters, kayakers, and paddle-boarders get into trouble; the water feels so warm when they put their hand in it.
http://www.coldwatersafety.org/images/CWS_thermometer.png
As an aside, it really is a testament to how amazing wetsuits are that I can surf in 46F water.
Here is an incredibly informative video about cold water immersion. It’s full of counter-intuitive facts. I highly recommend this to everyone who goes out on the water.

True, however having been immersed in the Arctic Ocean, I can assure you that saltwater at freezing, ie 28 degrees C, feels warmer than air temperature at -28 degrees C. Of course, you can die more rapidly in the “warmer” water than in the air.

Sometime during the winter of 1959-60 when I was a foolish teenager I swam in a swimming pool after busting up the 3-inch thick sheet of ice on its surface. I swam for about 20 seconds and had to get out from the sheer pain – the nerves in my skin couldn’t tell my brain whether it was freezing cold or burning up with fire!

Max,
Thanks for the chart! I start swimming each year when the surface water reaches ~ 65F. Any colder than that and I have difficulty regulating my breathing and swimming fast enough to keep my body warm. It can be kinda laughable, trying to stay in the thin warm surface water layer on a small lake, when the water at 6 feet deep is still tingling cold. Swimming ‘thin’……

My parents were on a small lake and I too would swim in it when only the top foot was tolerable. The cold layer below provided a powerful incentive to develop a high-elbow catch.

What about a Nor’easter? How about a strong Pacific winter storm? They both look about the same.

The “missing heat’ caught a cold?

Blocking Highs, like the one we see in the Bight this coming week, appear to be a regional cooling signal.
‘….it is more likely that low-pressure cells will develop on the southern side of the sub-tropical high-pressure ridge as it slowly retreats north with the oncoming southern winter.’
The STR collapsed last July, allowing low pressure to penetrate from the north and south, so I’m betting the loss of intensity will continue and the centre of blocking high pressure won’t migrate to northern NSW.

South-east Australia was just battered by a low pressure which broke off from the polar vortex. This complex low, drifting into the mid latitude, is a sign of regional cooling.

Actually it didn’t, there were two low centres, one arrived from SW of Tasmania and the other formed off the NSW north coast, Wednesday, and drifted south fast. They converged in and east of Bass Strait, forming a complex low with a warm patch in SSTAs where feeders were sourcing.
BOM and media are playing up a ‘polar vortex’, but I can’t see that, the main source of cold is not even the low, it is the deep south-west fetch of a large blocking-high, just to the west, injecting cold into the area.
It’s not going to stop doing that soon either, the basic pattern with that Bight High is well established within the next 10 day run, in fact it regresses SW and re-strengthens several times, while the southerly fetch actually gets deeper during the run. So the only thing preventing sustained much colder air input is that the ECL drifts east mid-week. Winter kicked-off early this year.
New Zealand next weekend shows cold strong SW’ly wind, deep long-fetch, combined with high-humidity. Should get interesting.
https://www.windy.com/?-48.000,150.000,3

0
Bryan A
Reply to  WXcycles

Thanks for the clarification WX.

0
meteorologist in research
Reply to  WXcycles

WXcycles – have you ever tried forecasting north of the Tropic of Cancer? It seems to me it would take a long time to get reoriented..

Not a warm core tropical cyclone.

That is dramatic, here it appears as a modest low.
http://www.bom.gov.au/fwo/IDY65100.pdf

Not all cyclones are tropical.

“Cyclones are not typically found in this region because sea surface temperatures (SSTs) in the southeastern Pacific Ocean are usually too cold.”

What an amazing claim!
Cyclones are low pressure systems.
Cyclones even form in the polar regions, where water temperatures are much colder.

“Despite the colder waters, the cyclone still formed due to favorable atmospheric conditions, with wind speeds similar to a weak tropical storm.”

A) They’re making an extra-tropical low pressure system out to be a tropical storm.
B) “Atmospheric conditions” supported low pressure development. SST are just one component for tropical storms to organize and grow stronger.
C) These characters ignore where and why cyclones form worldwide.
It’s just another case where people get excited and make claims for “unusual”, then try to blame the “unusual” cyclone solely on SST.

I saw that on the MODIS yesterday, when I was looking for the snow line in the northern USA (gone northward) and I saw a rather bodacious cyclonic formation off the coast of Greenland.
Don’t know if that’s normal or not, but it was odd, and I’m wondering if that can explain why there is a cold front that has settled over my area (35 mi north of Chicago, 5 west of Lake Michigan), and seems to not be moving much further south. The cold front extends far to the west of me and is settled across my latitude from the east coast westward to the mountains. Snow + rain in Nevada, Utah, Idaho, Wyoming, Montana, and PacNW.
This late chill been sitting on us like a grumpy old man for weeks now.
Weather systems aren’t isolated. One system affects another. Just wondering if the Greenland swirl has anything to do with it.

Category 7 storm off Chile
Threatens to deliver 750,000 year record rainfall
Global warming is much much worse than anyone previously imagined.
We are DOOMED!

That looks quite cold-core if you ask this meteorologist. Plus they called it ‘subtropical cyclone’ so perhaps a bit of a hybrid. In any event it appears they stretched it quite a bit calling it even that.

Seems like they just ‘winged it’ from satellite. An ‘eye wall’? I have seen cold-core low centers with ‘eyes’ many times in my career. So this is simply a guess based on satellite from what I can infer. Also looking at past model data of the system it appears to be purely cold-core. There is a hint of an embedded low in the cold core system that may have hints at warm-coreness but still, it is a stretch and they simply called it ‘subtropical low’. So while it may be somewhat rare the thing had a 546dm thickeness around the center…not closed. Um, try again NOAA.

Looks to be 160KM off the coast from La Serena, Chile. Which is half way down chile’s length.

Am I the only one more interested in the direction of rotation than in the fact it formed at all? After having spent so many hours watching storms in Atlantic and Gulf of Mexico it just seems so,,,odd.
And Max? Thanks for the link on that video, sent it to my son and several other people. You just can’t emphasize enough to people how fast hypothermia can kill their a$$, even after out of water.

Southern hemisphere cyclonic motion is clockwise.
This cyclone is associated with a loop in the jet stream:
https://earth.nullschool.net/#2018/05/09/1200Z/wind/isobaric/250hPa/orthographic=-79.62,-65.

You can back the date up to may 4,and watch it form.

The rotation of cyclones comes from coriolis effect, which is the opposite in the southern hemisphere. Toilet flushes rotate clockwise as well.

Don’t get me started on Bart Simpson getting the giant boot! 😉

And I so rarely track southern hemisphere storms it is quite novel. Being one of those deplorable southern bigots I really only track Atlantic Basin, Caribbean and Gulf of Mexico systems. And the occasional illegal alien storm crossing from eastern Pacific.

Mr. Gore can finally get an honest photo of a clockwise cyclone in the Western hemisphere….

Last one formed in late April, early may of 2015 and was called Katie. This area is not really monitored for this type activity.