The New York Times ran an editorial Sunday about the effect climate change had on discovering the Northwest Passage that appears to contradict claims the Arctic ice is melting at cataclysmic rates.

The editorial: The Northwest Passage That Might Have Been 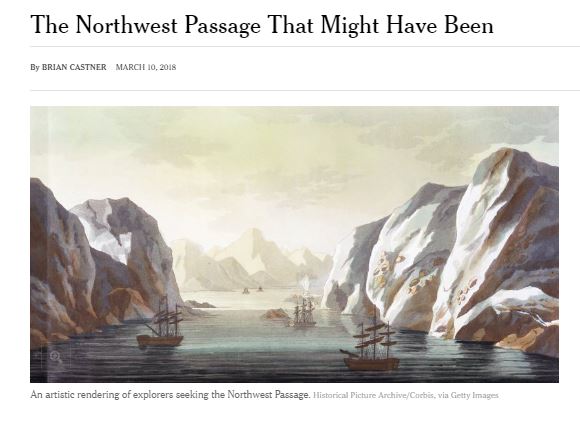 Global warming would have helped famed fur trader Alexander Mackenzie discover a Northwest Passage connecting North America to China, according to a NYT editorial from author Brian Castner. His piece contains one significant caveat: Mackenzie’s 1789 trip happened during an era of above normal ice packed in the North that occurred before widespread fossil fuel use.

“Mackenzie paddled during the Little Ice Age, a few centuries of below-normal cold,” Castner wrote before noting Mackenzie’s failed attempt probably would have been successful had temperatures been at normal ranges.

“If he had undertaken his trip during average conditions, or at our current global temperatures, he would not have been stopped by ice,” he added. “If the ocean hadn’t been icebound, would the fur trade have followed him down the river to China? Would a summer Deh Cho have been Canada’s own Mississippi River? Would settlers have wagoned in, a northern Oregon Trail?”

The so-called “Little Ice Age,” a period stretching from the 14th century to the mid-19th century, is a controversial topic among scientists.

Some scientists argue low solar activity contributed to cooler temperatures over Europe and North America, while others posit volcanic activity drove temperatures lower since the trend began before solar activity fell. It nevertheless resulted in several layers of ice covering large sections of the Arctic.

All the various straits north of Hudson’s Bay were explored during the mid-1700s, most of which all were found full of packed ice even in summer. Most 18th century officials recognized the Northwest Passage existed but were unable to confirm their suspicions as the Little Ice age gripped previously passable parts of the Arctic ocean. 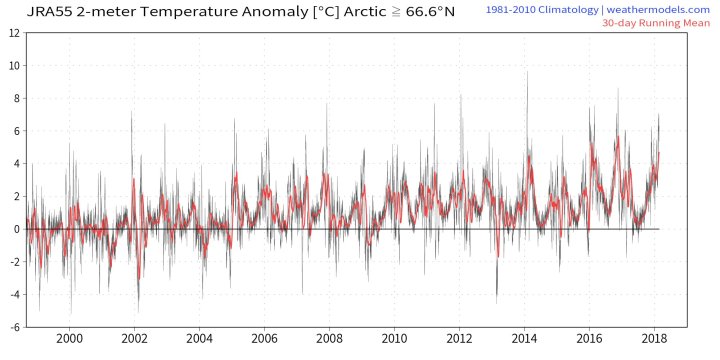 An EKG-like pattern is visible in the data, but there is a warming trend. Data before the satellite-era, 1976, is problematic, so it’s hard to say the current spike is for sure a record.

There is a “here be dragons” aspect to the missing information about arctic ice cover. Lack of reliable evidence is spun into whatever the writer is trying to demonstrate. So lack of reliable evidence before the satellite era is made to mean that the current melting condition is “unprecedented”. Reports of clear water in the 1920’s for areas covered with ice in the 1950’s or 1960’s are discounted as no one knows about the rest of the icepack.

A one to two-degree change in a yearly average tells us almost nothing, other than “some days have been warmish compared to some past days” — and for the Arctic, it is mostly “winters have not been so dangerous cold recently”. The Maue graph is Februrary 30-day means — so the dead of winter has been 2 degrees less horribly cold.
More helpful data would have been average temperature by degrees with 32F or 0C clearly marked or number of days above freezing for the month or some other more significa

Did you mean two meters or two degrees?

Perhaps he has a really long thermometer?

which makes it more accurate.

Except you have to back way, way up, before you can read it.

And if Lord Franklin hadn’t been eaten by a Yeti, Canada would be a world power. 😉
https://winteriscoming.net/2018/03/10/amcs-the-terror-promises-history-packed-with-horror/

Mackenzie named the river Disappointment River, but the name was later changed to Mackenzie River.

It is where he met Michael Mann.
Hence, he called it Disappointment River.

What I “love” is when anyone reports something, ice extent, temperature for a given area, etc that is less or more than “in history” when the record may only go back to 1979. They seldom mention the length of their record when make such pronouncements. Ice extent at both poles is a great example. Until we put satellites up it was impossible to get a synoptic view to the amount of ice at the poles. What is bizarre is the “warmists” want to have it both ways. If anyone suggest there was less ice at some time in the past, say 1920s, they claim there is no way of knowing. Yet based on satellite data the ice extent is lower than it has been in recorded history even though that recorded history only started in 1979 and then of course the Arctic Ocean will be ice free in the summer in a decade.

0
Bryan A
Reply to  Edwin

I thought that it was supposed to be “ice free within a decade” more than 2 and almost 3 decades ago, in fact every decade for the last 3 decades.

NYT is a propaganda outlet wholly owned by Mexico, and affiliated with the DNC, with an interest to influence our elections.

I thought that it was only the Russians who were interested in influencing our elections.

Jim: It only SEEMS to be only the Russians. The NYT/progressive press attempts to influence American elections, but it is not detectable, like the influence of a certain magic gas on climate. Evidently the Russians are better at it.
[Found and rescued. -mod]

The first rule of musings in the NYT is to ignore context for science-oriented readers in order to tell a story with a slant.

I don’t want to quibble too much. But, the linked article is not an official statement of the NYTimes editorial board. Those statements, usually called editorials, do not carry bylines.
Nor is it a column written by one of their regular staff columnists, such as Paul Krugman. Those staffers range politically from the Insane Clown Posse Left, such as Krugman and Charles Blow, to moderate conservative Ross Douthat.
The article is an op-ed by an author who is peddling a new book. The NYTimes gave him a platform, but they do not vouch for his credibility.

Walter Sobchak, you are correct. Other than saying that climate change is responsible for there being less ice in the Arctic, Castner’s only apparent sin is to assume that the world has warmed since the Little Ice Age. This is not exactly heady stuff.
If we want to rag on the NYT, we can do a lot better than this.

Tell me again how the NYT is contradicting itself?

Using the Danish Met chart of temps N of 80, the spike up started in early January at 247 Kelvin. The high a couple of weeks ago was 264 and now it is at 245. The numbers are “eyeballed” off the chart, but it looks like a new low for the season is being set. Late in the winter.

For what it is worth, there is a generally discarded suspicion that the Vikings may have got as far as the west coast of North America before the Little Ice Age. See particularly Maps 2 and 2C of http://www.spirasolaris.ca/sbb4g1cv.html

“Packed ice?” I think the article means pack ice.
[It depends on how the martini is shaken, (or stirred, as the case may be). Below the equator, it is stirred counterclockwise but shaken down and up, ya know. .mod]

In discussion with any climate alarmist (s), my first question is how many p.p.m. are in our atmosphere? Most are not sure, but raise their voices to make their point. Having sold CO2 for over 30 years for eating & beverage enjoyment welding or plant enrichment, I know without this gas we wouldn’t have much of a planet. I have pointed out that the content in our atmosphere can be understood simply by placing a pencil on a football field. 770 p.p.m. is a variable & about how much there is on this earth presently .I made a good living selling CO2, & I am proud of it.

As usual, the article fails to account for the temperatures of the incoming ocean waters which hugely influence arctic ice increase or decrease.

York Factory, Churchill etc on Hudson Bay since 1769. The ships came every year people. Global warming studies always forget there were people living right where it is far too cold for that in the days of lower CO2.
The Inuit and their whaling boats and the sailing ships of the Europeans did NOT actually use their boats in the Arctic because it was too cold.

No change in temperature to today.

Where can I find the actual numbers, please?

Lotsa luck with that one.