From the “models aren’t the same as reality unless you have a bigger computer” department. 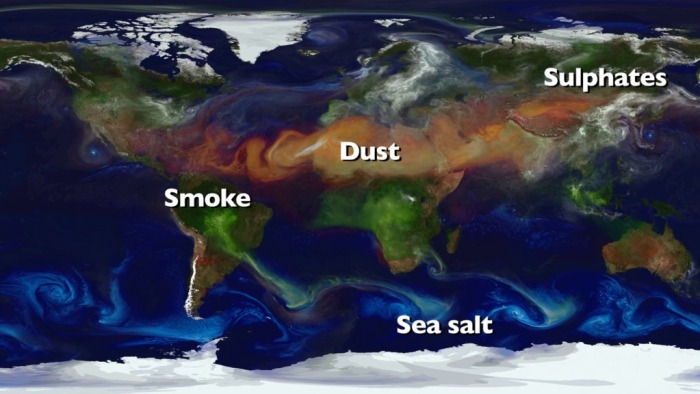 This portrait of global aerosols was produced by a GEOS-5 simulation at a 10-kilometer resolution. Dust (red) is lifted from the surface, sea salt (blue) swirls inside cyclones, smoke (green) rises from fires, and sulfate particles (white) stream from volcanoes and fossil fuel emissions. Image credit: William Putman, NASA/Goddard – image for illustration only – not part of the press release below.

Global climate is a tremendously complex phenomenon, and researchers are making painstaking progress, year by year, to try to develop ever more accurate models. Now, an international group including researchers from the Advanced Institute for Computational Science (AICS) in Japan, using the powerful K computer, have for the first time accurately calculated the effects of aerosols on clouds in a climate model.

Aerosols play a key role in cloud formation, as they provide the “seeds”–called cloud condensation nuclei–that allow clouds to form and affect their life cycle. The water in the air condenses onto the tiny particles, and gradually grow into droplets and finally into raindrops that precipitate. The action of aerosols is an important element of research on climate change, as they partially counteract the heating action of greenhouse gases.

It was previously believed that increasing aerosol density would always lead to more clouds, but recent satellite observations showed that this is not necessarily true. It is now understood that, due to temperature differences between the top and bottom layers of clouds, there is a delicate balance of evaporation and condensation, with aerosols in the lower parts of the clouds promoting cloud formation, but those in the upper parts allowing the water to evaporate.

Previously, climate models were unable to model the response of these micro-processes within the clouds to aerosol variation, but using the K computer, the RIKEN-led group combined a model that simulates the entire global weather over a year, at a horizontal resolution of just 14 kilometers, with a simulation of how the aerosols behave within clouds. Unlike conventional models, which show a uniform increase in clouds over the earth when there is an increase in aerosols, the high-resolution model, which takes into account the vertical processes inside clouds, accurately depicted how large areas experience a drop in cloud cover.

According to Yosuke Sato from the Computational Climate Science Research Team at RIKEN AICS and Nagoya University, “It was very gratifying to see that we could use a powerful supercomputer to accurately model the microphysics of clouds, giving a more accurate picture of how clouds and aerosol behave in the real world. In the future, we hope to use even more powerful computers to allow climate models to have more certainty in climate prediction.”

82 thoughts on “Claim: Scientists accurately model the action of aerosols on clouds”