Over the weekend, Twitter users — including some climate scientists — were upset by a plaque at the American Museum of Natural History (AMNH) in New York, which seems to be spreading misinformation about climate change. The panel, titled “Recent Climatic Changes and Extinctions,” misstates the role that human emissions of greenhouse gases play in causing global warming. It also says that, although we’re currently living in one of Earth’s warm periods, “there is no reason to believe that another Ice Age won’t come.” But it turns out, the panel was put up 25 years ago, according to the museum, so it contains outdated information that reads very differently today.

Images of the sign were first tweeted by environmental economist Jonah Busch, and were shared over 2,000 times. Busch tweeted that the panel is at the David H. Koch Dinosaur Wing, which was funded by right-wing philanthropist and fossil fuel magnate David H. Koch, and asked the museum to “separate this panel from its donor’s interest.” The tweet sparked outrage among scientists and the general public: “Dear @AMNH I bring my young kids to visit regularly because science & natural history is fascinating, inspiring and fun,” one tweet read. “Please do not misguide their curious minds. If we can’t even trust the AMNH to give us the facts who can we? Very sad.” 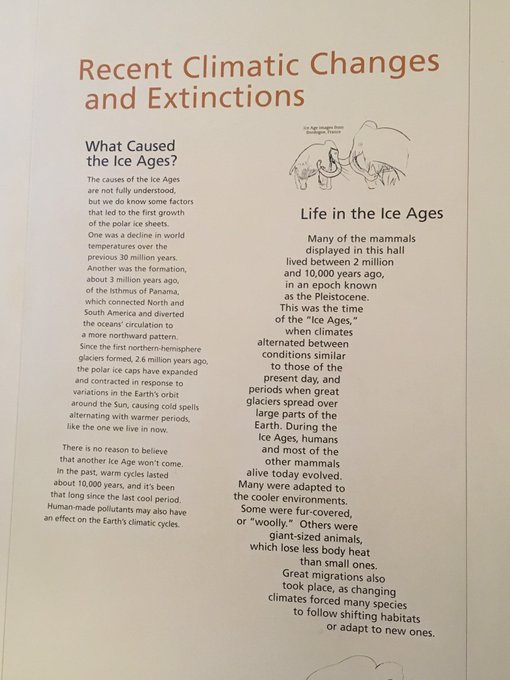 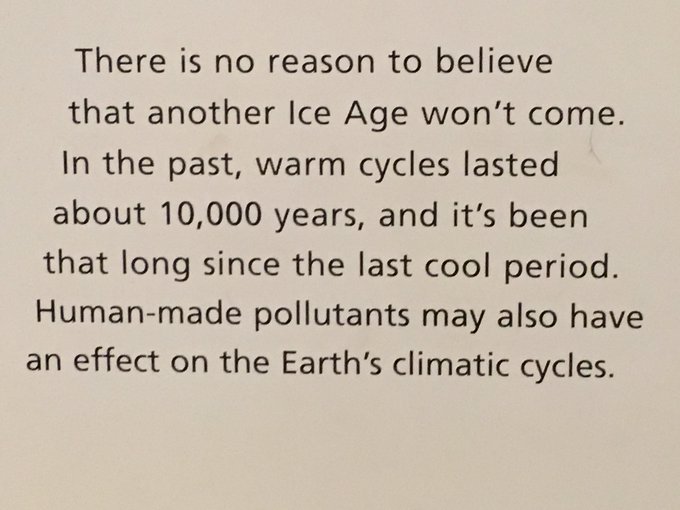 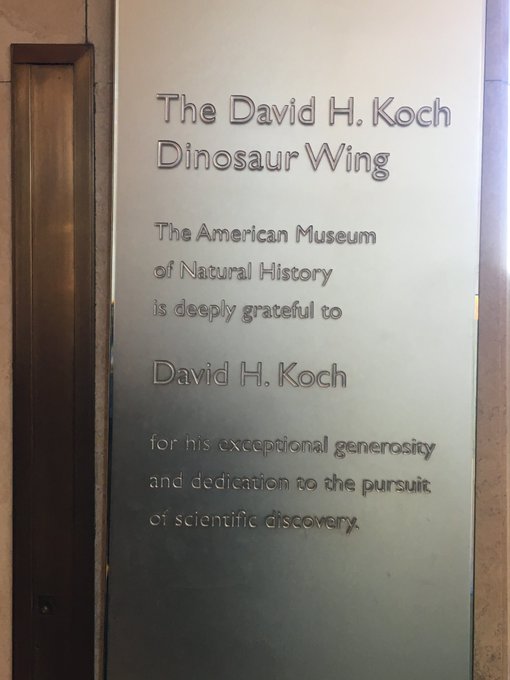 I am shocked and saddened to see the American Museum of Natural History @amnh promoting misinformation on climate change in its David M. Koch-funded Dinosaur Wing 1/

Here is one of the Tweets from a “climate scientist”…

My friends at @AMNH: I do think this requires both explanation and action. It suggests a breach of the firewall that is supposed to stand between the agenda of the donor and the objectivity of scientific content.

So… David Koch funded the Dinosaur Wing (really good with Buffalo sauce), the Ice Age exhibit has a plaque which says, “there is no reason to believe that another Ice Age won’t come”… And this is some sort of climate denier “misinformation on climate change” and a “breach of the firewall that is supposed to stand between the agenda of the donor and the objectivity of scientific content”???

Do these people not understand that the Dinosaur Wing and Ice Age exhibit are two different exhibits, separated by over 60 million years of geologic time?  Setting aside the fact that we are living in an interglacial stage of an ice age… How is it misinformation to state that  “there is no reason to believe that another Ice Age (glacial stage) won’t come”?  Maybe we’ll get lucky and anthropogenic CO2 will forestall or mitigate the onset of the next Quaternary glacial stage… But I wouldn’t bet on it.

FORECASTING THE FUTURE. We can now try to decide if we are now in an interglacial stage, with other glacials to follow, or if the world has finally emerged from the Cenozoic Ice Age.  According to the Milankovitch theory, fluctuations of radiation of the type shown in Fig. 16-18 must continue and therefore future glacial stages will continue.  According to the theory just described, as long as the North and South Poles  retain their present thermally isolated locations, the polar latitudes will be frigid; and  as the Arctic Ocean keeps oscillating between ice-free and ice-covered states,  glacial-interglacial climates will continue.

Finally, regardless of which theory one subscribes to, as long as we see no fundamental change in the  late Cenozoic climate trend, and the presence of ice on Greenland and Antarctica indicates that no change has occurred, we can expect that the fluctuations of the past million years will continue.

Even though the plaque is supposedly 25 years old, it clearly says that “human pollutants may also have an effect on Earth’s climatic cycles”… Well, they might have an effect.

It really boggles the mind that so many people frequenting the geological exhibits of the AMNH could be so ignorant of basic Quaternary geology, particularly the alleged climate scientists who chimed in on this Twitter-storm.

The Earth’s climate rapidly cooled about 34 million years ago.  This cooling marks the transition from the Eocene to the Oligocene…

Cenozoic temperature anomaly. Older is to the right, x-axis is millions of years before present (1950 AD).  Earth’s climate rapidly cooled about 34 million years ago.

Cenozoic atmospheric CO2. Older is to the left, x-axis is in millions of calendar years AD (BC). The Mauna Loa instrumental record  is depicted by the solid black line at year 0.  Oligocene CO2 levels drop from about 800-1,000 ppmv to about 600 ppmv from 32.5 to 30 MYA.

My apologies for the different x-axes.  I made these graphs several years ago and don’t recall where I saved the Excel files.