From the ‘scare tactical modeling’ department comes this press release today, which has been circulating to news media until the embargo lifted this morning. You’ll see all sorts of caterwauling from the usual media outlets about how global warming is even worse now, and the future looks grim.

Of course, the back story is pretty much the business as usual scenario; activist scientists, in this case Patrick Brown and Ken Caldiera, who work for the think tank Carnegie Institute have taken the Representative Concentration Pathways (RCP) climate model set, tweaked it a bit with some observational data from the CERES dataset, and declared warming is going to be worse than even the worst-case RCP 8.5 model, which is quickly losing favor as being out of sync with reality.

You can read more about the ‘nightmare scenario’ that is RCP 8.5 here.

Here is the press release:

The global warming projection for the end of the twenty-first century could be about 15 per cent greater than the steepest emissions scenario from the Intergovernmental Panel on Climate Change (IPCC), reports a study published in this week’s Nature.

Climate models indicate that human-caused emissions of greenhouse gases will continue to warm the global climate. However, the projected warming varies extensively among different climate models, complicating efforts to mitigate and adapt to climate change.

Patrick Brown and Ken Caldeira assess the many available climate models and constrain them with observational data of the energy budget at the top of Earth’s atmosphere. Focusing on those that realistically simulate observations, the authors find that the observationally informed warming projection to the end of the twenty-first century for the steepest emissions scenario is about 15 per cent warmer than reported by the IPCC and the uncertainty of the previous projections is reduced by a third.

The results add to a broadening collection of research indicating that when models are constrained by observations, they tend to project more global warming for the remainder of the twenty-first century. Therefore, achieving any given global temperature stabilization target will require steeper greenhouse gas emissions reductions than previously calculated.

Climate models provide the principal means of projecting global warming over the remainder of the twenty-first century but modelled estimates of warming vary by a factor of approximately two even under the same radiative forcing scenarios. Across-model relationships between currently observable attributes of the climate system and the simulated magnitude of future warming have the potential to inform projections. Here we show that robust across-model relationships exist between the global spatial patterns of several fundamental attributes of Earth’s top-of-atmosphere energy budget and the magnitude of projected global warming. When we constrain the model projections with observations, we obtain greater means and narrower ranges of future global warming across the major radiative forcing scenarios, in general. In particular, we find that the observationally informed warming projection for the end of the twenty-first century for the steepest radiative forcing scenario is about 15 per cent warmer (+0.5 degrees Celsius) with a reduction of about a third in the two-standard-deviation spread (−1.2 degrees Celsius) relative to the raw model projections reported by the Intergovernmental Panel on Climate Change. Our results suggest that achieving any

I have to laugh at the phrase in the abstract “When we constrain the model projections with observations…“. What the authors are really saying is that they are using the CERES data to create a greater feedback in the model, and thus increase the worst-case scenario by 15%. “Constrained” should actually be “amplified” but in the double-speak of climate modeling, the choice of words is all about making you think they are being conservative with the numbers. In figure 2, note the “observationally informed” plots of the model spread and the Equilibrium Climate Sensitivity whisker plot which suggests an ECS of about 3.7C. Note also the red line in figure 2, which is what their paper predicts. 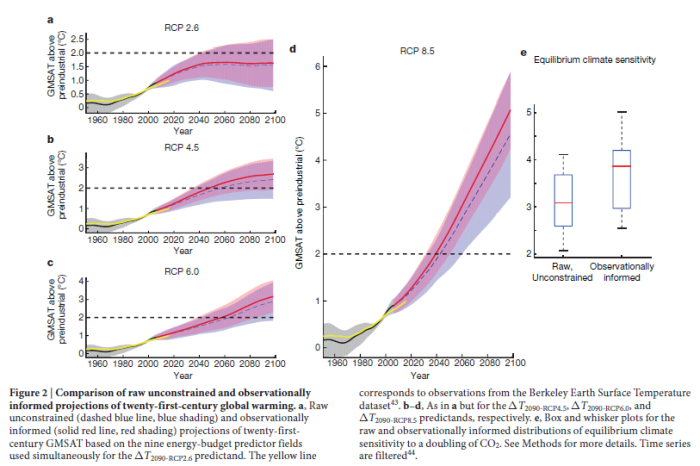 3.7C is well above many other observationally-based estimates of ECS, but then again Caldiera is well-known for being a climate alarmist.

Below, I’ve added the Brown-Caldiera ECS estimate to the collection of ECS estimates that we have previously published on WUWT, with a hat tip to Pat Michaels at CATO who originally started this graph:

The important thing to note about the above graph is that it represents a range of opinion. Clearly, climate science doesn’t know exactly what the response of the atmosphere is to a doubling of CO2, but we have a range of opinions published in the literature.

Dr. Benny Peiser of The Global Warming Policy Foundation commented on this paper prior to publication:

The flood of conflicting global warming predictions for the 21st century — from harmless to alarmist — is evidence that climate modellers remain divided over the issue of climate sensitivity. Empirical observations are our best guide. They show that the warming trend over recent decades is much lower and much slower than models have predicted. As long as climate models fail the test of time and fail to replicate reality, they should be treated as GIGO.

Nic Lewis, who authored papers on ECS, shown in the above ECS chart, had this to say:

I am doubtful whether the predictor measures they use are that relevant to the multidecadal warming that they are seeking to predict. They use mean climatology, the magnitude of the seasonal cycle, and the magnitude of monthly variability. The last two are both short term measures, and it is well known that such short term behaviour is not a good guide to longer term warming behaviour under greenhouse gas forcing; or is mean climatology of direct relevance to it.

Their statisitical methodology is quite complex and it is possible that it may not be appropriate.

Of course, the caveats to the headline and headstrong ECS estimates are buried in the paper, and the paper is behind a paywall thanks to Nature. Don’t look behind the curtain!

From the discussion section of the paper:

The constrained global warming projections presented here come with a number of important caveats. First, the unconstrained model values of Δ T do not span the complete uncertainty range. This is because there is a finite number of models, they are not comprehensive, and they do not sample the full uncertainty space of physical process representation. For example, a rapid nonlinear melting of the Greenland and Antarctic ice sheets has some plausibility but is not represented in any of the models studied here and thus it has an effective probability of zero in both the raw unconstrained and observationally informed Δ T distributions.

Furthermore, the models used here cannot be considered to be independent and thus the effective number of models in the suite is less than the nominal number. Because of these considerations, the raw Δ T model spread is best thought of as a lower bound on total uncertainty and thus our observationally informed spread represents a reduction in this lower bound rather than a reduction in the upper bound. Second, the model suite used here is diverse in terms of the level of sophistication of the simulation of, for example, atmospheric chemistry, carbon cycle processes, vegetation dynamics, and so on (Supplementary Table 1). This makes it more difficult to pinpoint the reasons for the spread in Δ T than it would be in a documented perturbed-physics-like model ensemble where only one aspect of model structure is altered at a time. Our statistical results suggest physical mechanisms (as discussed above), but these mechanisms should be interpreted as speculative rather than definitive. Third, the CERES satellite observations used here to constrain the Δ T projections were used to some degree during the model development process.

Ideally, observational data used to evaluate models would be completely independent of any data used in the development of the models. Unfortunately, owing to the limited length of high-quality observations, this is generally not possible for climate model evaluation. Thus, the model spread in the predictor fields may be artificially small owing to explicit efforts to reduce discrepancies between models and observations. Nevertheless, the model spread in the simulated climatological energy budget components is much larger than observational uncertainty (Extended Data Fig. 2), indicating that it is possible to distinguish statistically between models that perform well and poorly.

The above caveats notwithstanding, our results indicate that observations of several diverse attributes of Earth’s global energy budget indicate both individually and collectively that global warming is likely to be greater than that suggested by the unconstrained model suite. In particular, we find that the observationally informed end-of-twenty-first-century warming projection for the RCP 8.5 scenario is about 15% warmer with a reduction of about 33% in spread relative to the raw model projections. Another implication of our observationally informed projections is that the emissions associated with the RCP 4.5 scenario are likely to produce global warming more in line with that previously associated with the RCP 6.0 scenario (Table 1).

Finally, it is sometimes argued that the severity of model-projected global warming can be taken less seriously on the grounds that models fail to simulate the current climate sufficiently accurately. Our study confirms important model-observation discrepancies, indicating ample room for model improvement. However, we do not find that model errors can be taken as evidence that global warming is over-projected by climate models. On the contrary, our results add to a broadening collection of research indicating that models.

The take-away lines are these:

Finally, it is sometimes argued that the severity of model-projected global warming can be taken less seriously on the grounds that models fail to simulate the current climate sufficiently accurately.

However, we do not find that model errors can be taken as evidence that global warming is over-projected by climate models.

You have to admire the sheer chutzpah of such a statement, while at the same time shake your head and laugh about it. Thank goodness these guys aren’t modeling mission-critical structures like bridges.

77 thoughts on “Another ‘worse than we thought’ study: Warming to be 15% worse than worst case scenario”