The auto industry is at a crossroads, with the future of legacy automakers like Ford, General Motors Co (GM.N) and Fiat Chrysler Automobiles NV (FCHA.MI) uncertain as governments float proposals to ban internal combustion engines over the next two decades.

But in the present, consumer enthusiasm for trucks and sport utility vehicles is strong, especially in the United States. And that is providing Ford, GM and other established automakers with billions in cash to mount a challenge to Tesla.

Tesla has ambitions to boost annual sales to 500,000 vehicles a year. But it is wrestling with the sort of production problems that old-line automakers have largely put behind them, and has reported a net loss of $666.7 million through the first six months of 2017. Analysts expect the company to post a third quarter net loss of $380.4 million when it reports results next Wednesday.

How much do Americans love trucks?  This much:

Total U.S. PEV sales are on track to catch up to the Ford F-Series pickup trucks as soon as 2033, with total PEV sales exceeding 500,000 vehicles by 2030.  However,  Tesla has indicated that they intend to boost production to 500,000 vehicles per year as soon as 2018… Which is probably one of the reasons they slapped a “gag order” on all Tesla Model 3 purchasers…

Since the first Model 3’s were handed over to employee buyers in late July, rumors have been rampant of restrictions being demanded by Tesla, Inc. (TSLA) It would be perfectly understandable if Tesla was giving these cars to employees to test drive and evaluate. But they aren’t. Tesla continues to insist current buyers are paying full retail just like any other outsider. That being the case, what gives Tesla any authority to dictate terms to these buyers?

1) Buyers are restricted from posting anything negative on social media.

2) Buyers must retain ownership of their Model 3 for at least one year.

3) Buyers are prohibited from selling their Model 3 for more than the original purchase price.

This gets really crazy when it comes to enforcement. Not only does Tesla threaten employees with disciplinary action up to and including termination, they threaten the future buyer! Here is a copy of a portion of the actual form buyers are being required to sign.

So Tesla is actually threatening to “reduce or disable” a second buyer’s purchased car! Seriously? How on earth could this be legal in this country? Retaliatory actions by a manufacturer towards a product legally purchased by a buyer!? God forbid Tesla does something stupid that results in an accident.

Were the recent firings a shot over the bow?

Tesla recently fired hundreds of employees. Tesla said they were for “poor performance”. However, in recent press articles quoting some of the fired employees, there are claims employees were called by phone or emailed not to return to work. No exit interviews explaining Tesla’s decision were conducted. Prior performance reviews were glowing. So what happened to change Tesla’s perception?

Tesla is pushing the legal limits of force that can be exercised over employees here in the U.S. In the last few months we are seeing an increasingly aggressive posture by Tesla towards its employees. It has not gone unnoticed by the NLRB. The organization already slapped Tesla with a complaint in late August for how it reacted to employees interested in union organization.

Top management missteps just seem to keep on coming. Next Wednesday’s conference call should be a real eye-opener. If investors thought today’s price action was bad, then they need to buckle up for next week. A much better option would be to sell ahead of earnings. That was also my recommendation at $360 which was $35 ago.

Disclosure: I am/we are short TSLA VIA PUT OPTIONS.

I wrote this article myself, and it expresses my own opinions. I am not receiving compensation for it (other than from Seeking Alpha). I have no business relationship with any company whose stock is mentioned in this article.

Let’s face it… Membership in a cult does tend to come with cult-like requirements.

Employee dismissals at Tesla are continuing at its SolarCity subsidiary, according to six former and current employees, and are affecting SolarCity offices across the U.S.

Echoing reports from earlier this month, these SolarCity employees say they were surprised to be told they were fired for performance reasons, claiming Tesla had not conducted performance reviews since acquiring the solar energy business. Earlier this month, Tesla began firing hundreds of employees after it announced a recall of 11,000 Model X SUVs.

All the people spoke under condition of anonymity, citing fears of retaliation from Tesla.

Tesla Slashing Model 3 Parts Orders From Supplier Hoya Due To Production Bottleneck — What Are The Implications?

Tesla will be slashing orders for parts from the Taiwan-based auto component manufacturer Hota Industrial Mfg. Company by around 40% from December onwards, according to reports from Economic Daily News.

That report quotes Hota Chairman Shen Kuo-jung as saying that Tesla informed him that firm orders would be slashed to 3,000 sets per week down from 5,000 a week starting in December — owing to a “bottleneck” in Model 3 production that apparently can’t be quickly resolved.

Back to the news, the change makes for a fairly significant drop in orders (down 2,000 a week). Presuming that the reports are accurate, are things even worse as regards Tesla Model 3 production than has been publicly acknowledged? How much of a disparity between Tesla’s official Model 3 production goals and actual production numbers will there be over the coming months?

Prior to falling 83% short of their Q3 2017 Model 3 production guidance, Tesla had forecast “1,500 Model 3 sedans in September and grow that to 20,000 vehicles a month by December.”  Tesla will be reporting their October sales numbers as early as tomorrow, but right now it looks like total Model 3 deliveries has barely exceeded 500.  JPMorgan has halved their Q4 2017 Model 3 delivery estimate from 30,000 down to 15,000 vehicles.

UBS takes an even dimmer view of Tesla’s prospects…

Tesla’s disappointing Model 3 production ramp is a troubling sign, according to one Wall Street firm.

UBS reaffirmed its sell rating on the electric car maker’s shares, predicting Tesla will continue to have issues producing its Model 3 vehicles.

“Not only does the [Model 3] miss undermine the credibility of future Model 3 targets, but it increases the near term risks,” analyst Colin Langan wrote in a note to clients Monday. “We believe the market should not ignore fundamental challenges that persist with regards to Tesla’s Model 3 profitability, stationary storage & solar businesses, and eventual need to raise cash.”

Tesla did not immediately respond to a request for comment. 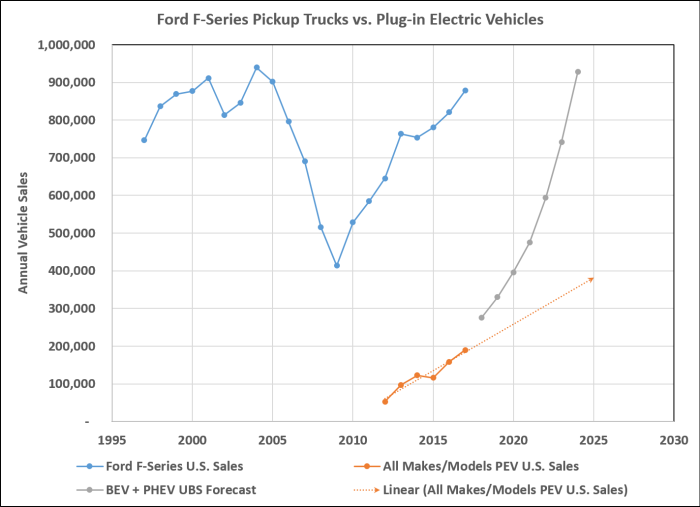 This brings us to…

In my previous post, we visited the “Cobalt Cliff“… an impenetrable obstacle standing in the way of Tesla building 500,000 Model 3 vehicles in 2018.  Of course, now it appears that Tesla won’t have to worry about the cobalt cliff anytime soon.  However, a cobalt cliff is out there, as is a lithium landslide.

The USGS is a great source for data on mineral production, proved reserves and resources.

Historical Statistics for Mineral and Material Commodities in the United States

The UBS article included a graphic of incremental metals demand in a 100% EV world.  The graphic was reproduced here:

Figure 3. The Impact Of EVs On Commodities In One Chart (Mining.com/OilPrice.com)

The graph makes a very simplistic assumption:  If all vehicles were currently VW Golf’s, how would it impact mineral commodities if they were all replaced with Chevy Bolt’s?  Simplistic, but a useful exercise.  I took the incremental increases of lithium, cobalt and rare earths and calculated the amount of material per vehicle based on 2015 mineral production and made the assumption that there are currently 1 billion passenger vehicles in the world.  I then estimated the mineral commodities demand that UBS’s 2015-2015 EV production forecast would yield.

Figure 7. Same as Figure 6, with a logarithmic y-axis.

Electric vehicle aficionados and other “futurists” like to use the word “disruptive” a lot.  To quote Inigo Montoya, “You keep using that word. I do not think it means what you think it means.”  The increases in mineral production required for just 45.6 million EV’s would be rather disruptive.

If UBS’s global EV production forecast is accurate, lithium and cobalt production will have to roughly double relative to 2014.  The cumulative consumption of lithium from 2014-2015 will be equivalent to 69% of 2015 proved reserves.  Cobalt consumption will be equivalent to 47% of proved reserves.  This sort of production is not impossible; but it will be highly disruptive, particularly since most cobalt production is a byproduct of copper and nickel mining.  According to the IEA…

“In order to limit temperature increases to below 2 degrees Celsius by the end of the century, the number of electric cars will need to reach 600 million by 2040”.

Identified world terrestrial cobalt resources are about 25 million tons. The vast majority of these resources are in sediment-hosted stratiform copper deposits in Congo (Kinshasa) and Zambia; nickel-bearing laterite deposits in Australia and nearby island countries and Cuba; and magmatic nickel-copper sulfide deposits hosted in mafic and ultramafic rocks in Australia, Canada, Russia, and the United States. More than 120 million tons of cobalt resources have been identified in manganese nodules and crusts on the floor of the Atlantic, Indian, and Pacific Oceans.

I am neither short nor long on TSLA or F, nor do I own an F-Series pickup truck.  I make my living finding oil & gas and drive a Jeep. 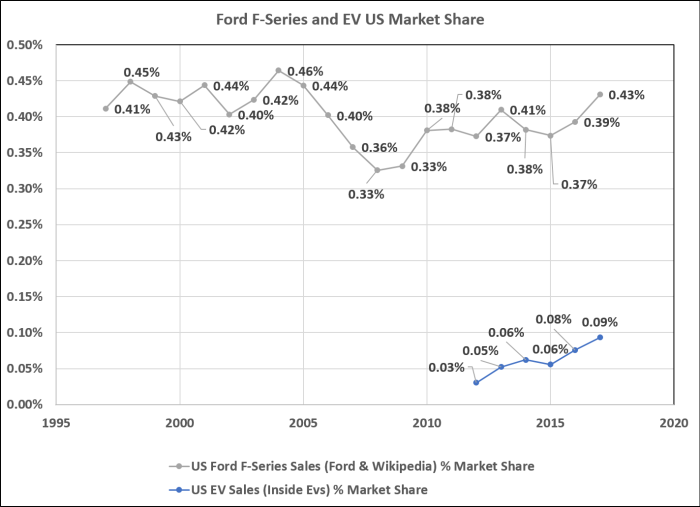 After releasing its worst quarterly figures ever, Tesla said it will delay the full-scale production of its Model 3 to early 2018, from December this year. Now, the company plans to churn out 5,000 Model 3s weekly starting some time in March next year, after announcing a total production of just 260 cars of the affordable model in the third quarter and deliveries of 220. Plans were to produce 1,500 Model S between July and September.