Is interest in biodiversity declining?

Google Trends, the data-scouring tool that lets people explore historical trends in search terms, is not a perfect window into cultural consciousness. Data is too cloudy for that. It is, however, an useful spotlight, good for glimpsing patterns and asking what might explain them. In that spirit: are people less interested in biodiversity now than a decade ago — and if so, why?

In a study published in the journal Biodiversity and Conservation, Andreas Troumbis, director of the Biodiversity Management Laboratory at the University of the Aegean, analyzed the frequency of Google searches that included the word “biodiversity” between 2004 and 2014. By the end of that time frame, it appeared roughly one-third less frequently than at the beginning. This doesn’t appear to be a statistical anomaly, writes Troumbis. The trend line represents something real. It seems that public interest in biodiversity has declined even as biodiversity itself grows ever more threatened.

That’s one way of looking at it. Another way, the one that Troumbis himself favors, is to situate that trend within a broader social context. The years studied span a global economic recession sandwiched by periods of comparative prosperity. Biodiversity appeared most often early on, fell throughout the recession, then bottomed out and started to rise as the recession lifted. “What we actually observe is a cycle of interest resonating with the cycle of the economy,” Troumbis says.

A “scientific” journal published a peer-reviewed paper on a Google search?  And the author concluded that the public is only interested in biodiversity when they aren’t worried about the economy?

Setting aside the stupidity of a peer-reviewed paper about a Google search being published in a “scientific” journal, the author does have a point…  Americans generally lose interest in Gorebal Warming when the price tag is mentioned…

How Much Will Americans Pay to Battle Climate Change? Not Much

Sam Ori is the executive director of the Energy Policy Institute at University of Chicago.

A wide range of public opinion polls point to a clear and growing trend: Americans of all political stripes are increasingly worried about climate change. This is undoubtedly good news for those advocating for robust policies to reduce carbon emissions, the main contributor to climate change.

But here’s a less asked and probably more important question: What are Americans actually willing to pay to do something about it?

This is what researchers from the Energy Policy Institute at the University of Chicago (EPIC) and the Associated Press—NORC Center for Public Affairs Research at the University of Chicago set out to better understand. Their nationally representative poll found that 43% of Americans were unwilling to pay an additional $1 per month in their electricity bill to combat climate change—and a large majority were unwilling to pay $10 per month. That’s despite the fact that a whopping 77% said they think climate change is happening and 65% think it is a problem the government should do something about. Support plummets as the amount of the fee increases.

This is an upside-down result. The best available science tells us that Americans should be willing to pay considerably more, because the damages from climate change are so great—including to them personally. If we use the federal government’s estimate of the combined social cost of carbon pollution and apply it to the typical U.S. household’s electricity consumption on today’s national grid mix, the average household faces damages of almost $20 per month. Yet just 29% of respondents said they would be willing to pay at least that much.

The article about the declining interest in biodiversity was published by Anthropocene (one of my favorite words to ridicule).  And the folks at the Anthropocene clearly live up to their title…

We are a digital, print, and live magazine in which the world’s most creative writers, designers, scientists, and entrepreneurs explore how we can create a sustainable human age we actually want to live in.

Our mission is to curate a global conversation about data, technology, and innovation that lead to solutions to the persistent environmental challenges of our time. Much like Foreign Policy, MIT Technology Review, and Harvard Business Review have done for their respective fields, we aim to build a thought-leader publication for the sustainability and development world.

Anthropocene is an initiative of Future Earth, the largest sustainability science consortium in the world; and it will be built in partnership with the Future Earth Media Lab based at the Stockholm Resilience Center. Editorially, Anthropocene is the evolution of Conservation magazine, which brings with it a 15-year track record of journalism and design excellence.

Anthropocene works with world-class veteran writers—as well a network of over 4,000 journalists in developing countries through a partnership with Earth Journalism Network. Through these networks, we scout innovative and often counterintuitive solutions to environmental and development challenges and craft in-depth stories about the people and technologies behind those innovations.

Our stories take many forms—ranging from daily coverage of compelling new research to interactive digital features to high end print editions. In addition, we plan to take select stories from page to stage in a live event series called “The Anthropocene Dialogues.”

Across all platforms, what we value most is editorial independence, clear writing with simple and powerful language, scientific and technological rigor, and beautiful design.

In the spirit of Science Gone Stupid, let’s see what Google Trends has to say about the word, “Anthropocene”…

Figure 1. Interest in the Anthropocene peaked at the end of the Obama maladministration, when we entered the Trumpocene.

That was kind of meaningless.  Let’s see a comparison of biodiversity and Anthropocene…

Figure 2.  It appears that, despite the waning interest, biodiversity towers over the Anthropocene.

That’s all well and good… But it still provides no clear frame of reference.  Maybe this will help… 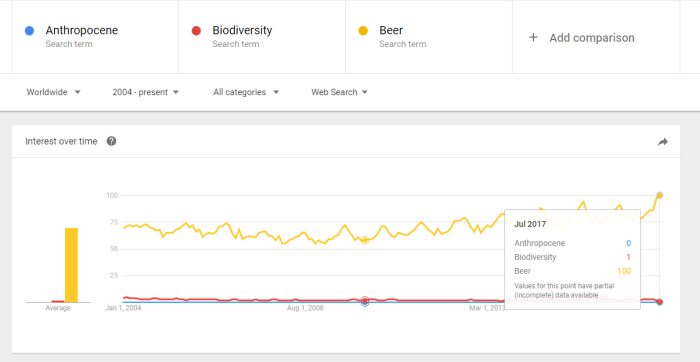 Is it really possible that humanity could be more interested in beer than in the combined interest in biodiversity and the Anthropocene?  Surely there must be some place on Earth where sanity prevails!

Figure 4. Red China, the Islamofascist Republic of Iran and a handful of Third World countries are more interested in biodiversity (red) than beer (yellow)… Probably because beer carries the death penalty in at least a few of these nations.

As usual, any and all sarcasm was purely intentional.

Science Made Stupid: How to Discomprehend the World Around Us is a 1985 book written and illustrated by Tom Weller. The winner of the 1986 Hugo Award for Best Non-Fiction Book, it is a parody of a junior high or high school-level science textbook. Though now out of print, high-resolution scans are available online, as well as an abridged transcription, both of which have been endorsed by Weller [1]. Highlights of the book include a satirical account of the creationism vs. evolution debate and Weller’s drawings of fictional prehistoric animals (e.g., the duck-billed mastodon.)