Why would anyone care what “environmentalists” have to say about potential Arctic oil revenue?  I only care because their “reasoning” is both fun and easy to ridicule.

Opening up the wilderness region is a perennial issue; bipartisan bills are introduced each Congress to definitively label the area as “wilderness” while industry groups seek to gain access to a section of land that had been designated for oil and gas exploration. Plans have existed since 1980 to use less than 3 percent of the more than 19 million acres of wilderness refuge for oil and gas exploration — but conservation groups argue even that amount is too much.

It is possible for the House Natural Resources Committee to meet likely revenue targets from the House budget resolution by following Trump’s budget proposal to open up the wildlife refuge for onshore oil and gas exploration, advocates from The Wilderness Society and the Alaska Wilderness League noted on a press call Monday. But the organizations say the federal government is likely to get much less than the Trump budget suggests.

The White House budget calculates opening up the region to oil and gas exploration should bring in a total $3.5 billion in revenue, half of which would be going to the federal government. But Cameron Witten, budget specialist for The Wilderness Society, called the president’s revenue assumptions “way off the mark” because Alaska’s state constitution designates that 90 percent of revenue from public land leasing will go to the state, reducing the federal intake to $350 million.

Notes to “Cameron Witten, budget specialist for The Wilderness Society”:

Possible Federal Revenue from Oil Development of ANWR and Nearby Areas

Specialist in Energy and Environmental Economics  Resources, Science, and Industry

Federal revenues would consist primarily of corporate income taxes on profits earned by oil producers from the production and sale of ANWR oil. As landowner, the federal government would also collect royalties from such production on federal lands, which are included in the estimates. If producers were able to recover 10.3 billion barrels of oil over the life of the properties — the United States Geological Survey has estimated there is a 50-50 chance that the ANWR coastal plain contains at least this amount of oil — and if oil prices are $125/barrel, then the federal government might be able to collect $191 billion in revenues over the production period, estimated to be at least 30 years once production commences. This estimate consists of nearly $132 billion in federal corporate income taxes, and about nearly $59 billion in federal royalties.

While oil prices are unlikely to be in the $125/bbl range anytime soon, most companies are basing decisions on $50/bbl with a modest escalation over time.  If 10 billion barrels of oil were produced from ANWR and the Federal government retained a 1/8 royalty, they would make a schistload of money, just from the royalties:

Now, that $62.5 billion would be paid out over 20-30 years and about half of the revenue would be shared with the State of Alaska; but the opening of ANWR could easily generate at least $3.5 billion/year in total revenue to the Alaskan and Federal governments.  And it would do this for at least 20-30 years.  Within a few years of opening up ANWR Area 1002, it could be producing 1.45 million barrels of oil per day.

Opening up ANWR is a no-brainer from every possible angle.  It’s literally right next door to the giant Prudhoe Bay oil fields: 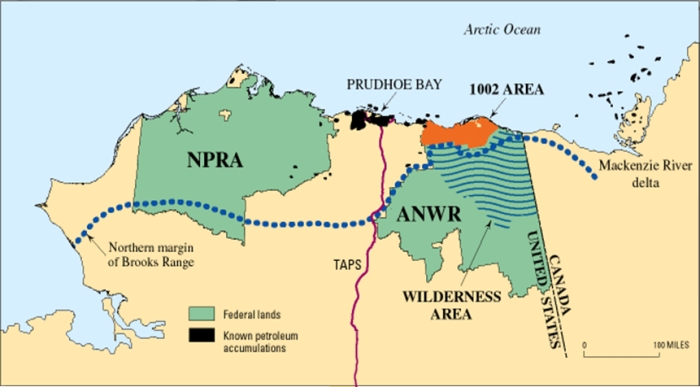 ANWR Area 1002 is a strip of barren coastal tundra right next door to the Prudhoe Bay complex. It would essentially be a “step-out” development. (Image from: US House Committee on Natural Resources)

Opening less than 3% of the Arctic National Wildlife Refuge (ANWR) in Alaska for responsible energy production could create thousands of jobs, generate billions in new revenue and help reduce our dependence on foreign sources of oil.

US House of Representatives Committee on Natural Resources

There should be no doubt in anyone’s mind that a successful development of ANWR Area 1002 would generate a schistload of money for the Federal and Alaskan governments… Plus it would extend the life of the Trans Alaska Pipeline System (TAPS) for at least another 20-30 years.

Back to the environmentalists’ opinion about Arctic drilling:

Nevertheless, conservation advocates believe opening up the refuge is unlikely, as it has been a “widely unpopular policy on Capitol Hill” historically…

Bills to open up ANWR have generally been filibustered.  Congress did vote to open it up in 1995; President Clinton vetoed it.  Filibusters and vetoes are generally not required to block “widely unpopular policy on Capitol Hill”.

The environmentalists then resort to the “industry isn’t interested” canard…

Chevron, for one, dropped its plans to drill in Canadian waters in the Arctic Ocean in 2014, amid a steep fall in crude oil prices. During a Morning Consult interview with the company in April, a senior Chevron official appeared ambivalent about prospects for increased access to offshore drilling in the Arctic.

In a statement Monday, Chevron spokeswoman Brenda Cosola said the company supports “increased access to federal and private land for the responsible exploration and development of oil and natural gas resources, including the ANWR coastal plain.”

ConocoPhillips, Shell, ENI, Iona Energy, and other oil companies that have Arctic drilling experience did not respond to requests for comment.

Anyone else shocked that most oil companies “did not respond to requests for comment”?  The steep fall in crude oil prices certainly played a part in the decisions of Shell, Chevron and ConocoPhillips to shelve plans for drilling in the Chukchi and Beaufort Seas.  However, regulatory malfeasance also played a major role:

Shell, in a statement, partly attributed its withdrawal to “the unpredictable federal regulatory environment” for offshore drilling, which the company said “made it difficult to operate efficiently.”

In October, the Interior Department canceled planned lease sales for parcels in the region, citing “low industry interest,” among other factors.

The funny thing is that most of these companies requested lease extensions so that they could possibly wait out the price crash and regulatory malfeasance.  These requests were denied and the Obama administration withdrew most of the Beaufort and all of the Chukchi OCS areas from leasing, due in part to “low industry interest.”

In the wake of two big oil discoveries in Alaska in the past year, exploration companies brushed aside concerns of low oil prices on Wednesday, bidding heavily in state and federal lease sales that were some of the largest in years.

Officials used words like “outstanding” and “surprising” as the bids were opened in state sales held in the Robert B. Atwood Building in downtown Anchorage early Wednesday morning. High bids totaled $17.8 million on tracts covering 633,000 acres on the North Slope and in the coastal Beaufort Sea.

Later in the day at the nearby federal building — where protesters held signs urging President Barack Obama to leave the oil in the ground — the Bureau of Land Management held what was the largest annual lease sale since 2004, when bids totaled $54 million.

Offering land in the National Petroleum Reserve-Alaska, the agency received 92 bids on 67 tracts, generating $18.8 million for 614,000 acres. The state receives half the revenue from the sale, or $9.4 million.

Environmentalists’ opinions notwithstanding, Arctic drilling revenue predictions can only be “way off” if the industry is not allowed to exploit ANWR and the Alaska OCS.