A while back I discussed the UN Global Poll regarding what people around the world think is important to them. At that point there were about six million respondents. The people taking the poll are asked to choose (just choose, but not rank) the six issues that matter most to them from the following list:

FREEDOM FROM DISCRIMINATION AND PERSECUTION

SUPPORT FOR PEOPLE WHO CAN’T WORK

AN HONEST AND RESPONSIVE GOVERNMENT

EQUALITY BETWEEN MEN AND WOMEN

PROTECTION AGAINST CRIME AND VIOLENCE 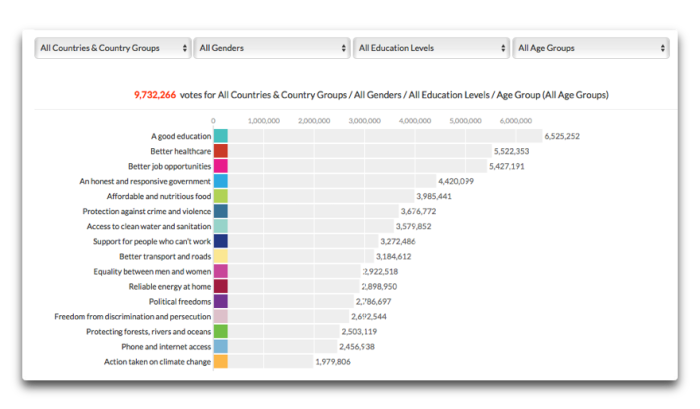 So I decided to drill down into the data a bit. I started by taking a look at the difference between men and women on the issues listed above: 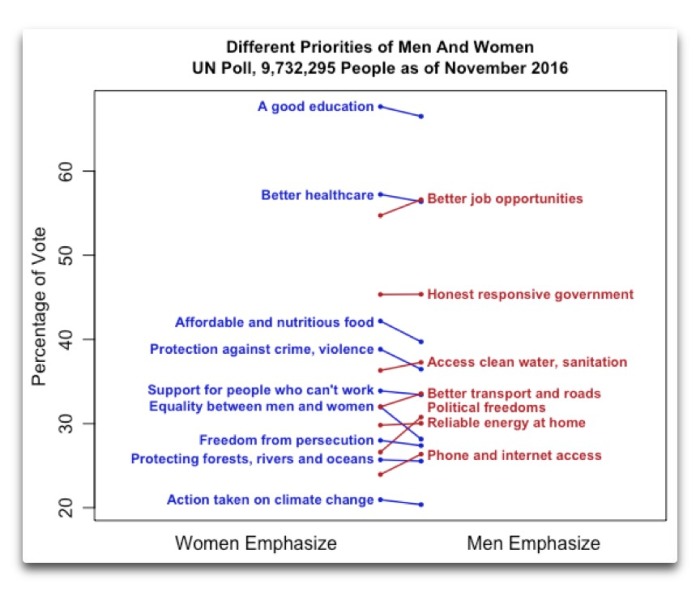 Figure 2. Differences between men and women. Values are the percentage of respondents who listed that item among their choices for the top six. Lines connect men’s and women’s percentage of responses regarding the same issue, and are labeled only at the upper end. Blue labels and lines show items which women considered more important than men, while red items are those that men found more important. Ends of colored lines show the percentage values for women (left ends) and men (right ends).

And action on climate change is at the very bottom for both men and women.

While that was quite interesting, I actually had set out to look at the differences between the poor and rich countries on these matters. The UN divides countries into four levels, from poor to rich, or in their terms, from “Low HDI” (Human Development Index) to “Very High HDI” countries. To simplify and clarify the changes, I’ve just used the first and last categories, the poorest and the wealthiest countries. Here are those results: 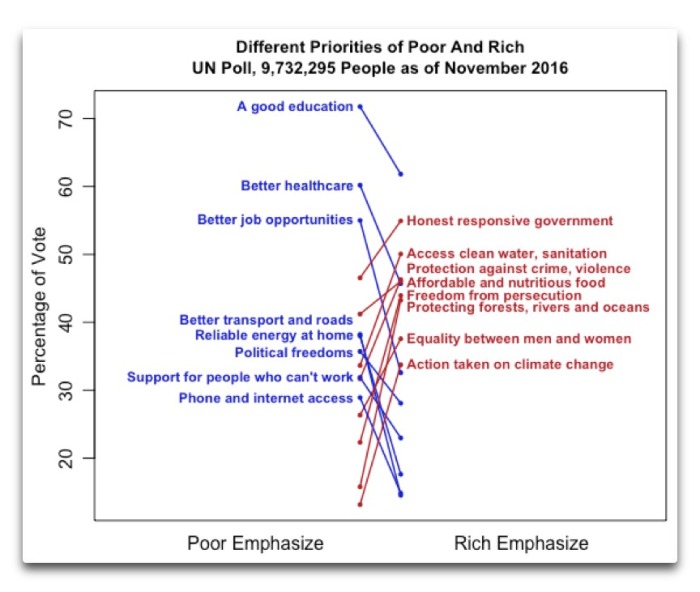 Figure 3. As in Figure 2, but showing the difference between priorities of the poor and the rich.

There are some interesting things going on here. First, education is number one for men, for women, for the richest countries, and for the poorest countries. In my opinion, this shows the good judgement of the human race worldwide. Or perhaps it just means that I agree with the rest of the world … education roolz.

Next, the top three issues of all groups combined (Figure 1), as well as of both men and women separately (Figure 2), are education, healthcare, and jobs. All of those are far less important to the rich than the poor. Also, many other things like phones, reliable energy, good roads, and political freedoms are not very important to the rich. The people in rich countries don’t find those things important for a simple reason—generally they already have those things, so they have the luxury of worrying about other items.

Next, it’s clear how environmental concerns are something that only the rich can afford. “Protecting forests, rivers, and oceans” ranks high among the wealthiest countries, well above job opportunities … but it is second from the bottom for poor countries, just above climate and a ways below the next issue above it.

Finally, climate change. The people favoring action on climate change, almost to a man or woman, claim that they are doing this for the poor … but it appears that the poor didn’t get the memo. For them, as for the world in general, climate change is dead last. And in the poor countries, only 13% of the people mentioned it, a very small percentage. As far as the poor are concerned, they’d rather people spend money on any other of their many problems before putting it into climate change.

Moving on to the claimed beliefs of the rich countries, the following are samples of what has been the narrative for some time now. First from the US:

Saying that climate change ranks among the world’s most serious problems — such as disease outbreaks, poverty, terrorism and the proliferation of weapons of mass destruction — U.S. Secretary of State John Kerry called on all nations to respond to “the greatest challenge of our generation.”

Next, from among our Cousins across the pond, the artist currently known as “Prince” favored us with his views on the matter, viz:

Tackling global warming is the biggest challenge facing the world today, Prince Charles has said, urging governments to act on climate change before it is too late.

Finally, from Obama’s Press Spokesman Josh Earnest we have:

1. “The point the president is making is that there are many more people on an annual basis who have to confront the impact, the direct impact on their lives, of climate change, or on the spread of a disease, than on terrorism.”

2. “The point that the president is making is that when you are talking about the direct daily impact of these kinds of challenges on the daily lives of Americans, particularly Americans living in this country, that the direct impact, that more people are affected by those things than by terrorism.”

3. “I think even the Department of Defense has spoken to the significant threat that climate change poses to our national security interests, principally because of the impact it can have on countries with less well-developed infrastructure than we have.”

Short version? If someone thinks they are helping the poor by fighting the dread CO2, according to the UN the poor would beg to differ. The people in the poor countries have shown clearly that they would prefer it if people who want to help would instead put their valuable skills and their hard-earned money and their precious time into any of the other fifteen items on the UN list before tackling climate change. Climate is not only number sixteen at the bottom of their list, it’s way below the rest in the opinion of the poor. The only reason it is not number seventeen is that there were only sixteen choices on the list …

So. While the US is often claimed to be an outlier because so many folks here (including the President-Elect) think climate change is not a significant issue, it turns out that most folks on the planet agree with the President-Elect that climate is down at or near the bottom of the issues that matter. The existence of some fabled large constituency in favor of action on climate issues seems to be a creation of the media … dang, a fabled constituency that is actually just a creation of the media, where else have I heard that lately? But I digress …

Given that we have a limited amount of time, money, and resources with which to work on these issues, it seems to me that we should focus our effort on the real problems that people have identified as making a real difference in their lives. In order, the top ten issues worldwide are education, jobs, healthcare, good government, food, protection against violence, clean water, unemployment insurance, roads, and sexual equality. If people truly care about the poor, pick one of those issues and go to work. It’s what I did for a good chunk of my life.

Once we’ve solved those challenges, we might think about spending billions on CO2 mitigation … or not.

But until then? Not so much.

As Always: Let me please request that to avoid misunderstandings, you QUOTE THE EXACT WORDS YOU OBJECT TO. This lets everyone know the exact nature of your objection.

In Addition: If you think I’m using a method wrong, or using a wrong method or dataset, please further the discussion by showing how to use the method in the right way, or by linking to the correct method or dataset. Simply saying “Willis, you’re wrong” doesn’t help me (and undoubtedly others) learn how to do it correctly.