A forecast model from the University of Michigan shows the potential for large percentages of Florida’s east coast to lose power – with the highest values near the coast.

Models can change quickly as the storm progresses. Visit nhc.noaa.gov for details on the storm and currently active storm warnings and advisories.

Developed by Seth Guikema (University of Michigan), Steven Quiring (Ohio State University) and Brent McRoberts (Texas A & M University), this predictive model factors in a variety of data including:

The estimated number of outages has been stabilizing at 8-10 million in the last few model runs as the track and intensity forecast have begun to stabilize.

For a full-resolution version without the university logos click on the figure. 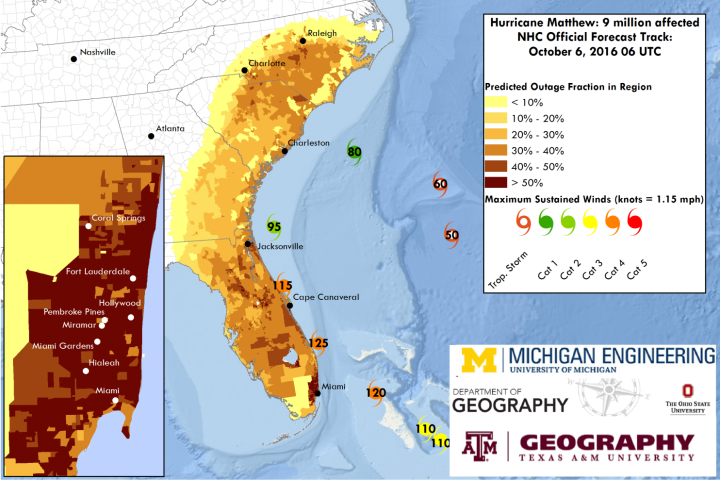 Here’s a free clue to all people in the path of the storm: Plan on losing power for one to several days; you won’t be so disappointed when you do, and if you miraculously don’t, you’ll be thrilled.
I’m not anywhere near the storm’s path (though on the East Coast), and I’m using the storm as a prompt to make sure my large battery pack (for charging phone, Kindle, etc.) and all my rechargeable batteries are fully charged. I checked the emergency closet rations not long ago, so that’s OK. I never trust the weather, and though the weather people say it won’t get to Virginia, why take chances? How often have they been wrong before?

The models are the “gold standard”. If they can’t predict impact on a short term basis why is their long term trend accurate?

Just announced, 1M lost power but the storm is ongoing.

Make that 1M customers who lost power. Number of people would logically be in the millions. 9M could prove to be very accurate.

Don’t understand why Miami, which will be furthest from path, shows higher percentage of power outages than further north that may get a direct hit.

Above ground power lines are fragile, the power source, or lines feeding Miami maybe in closer to areas impacted
michael

ATTENTION CLIMATE CHANGE WARRIORS
Nobody drive their gas guzzling cars today. The emissions might fuel Matthew and intensify it into a category five. You don’t want that additional death and destruction on your hands.

In UK you can get a 12V converter to mains for £25-40, with over 90% efficiency. Having a spare 60Ah car battery I’ve got one last winter mainly to be able to keep gas powered central heating electrics going in case of power failure, but of course you can charge-up all various devices too.

If you use something like this (or a gas generator), don’t forget to pull the main breakers (fuses for older houses) so that you aren’t energizing the utility lines outside your house. Linesmen have been killed this way.

No problem, many of UK gas boilers in recent years come with mains plug attached so it has to be plugged in nearby wall socket, process is very simple unplug from the wall and plug into the converter’s socket.

How long do you think your 12v 60 amp hour battery will last?
Try it out and you may be disappointed,look up OHMs Law to do the calculation.

In Orlando we lose power and internet when we get sprinkles. I figure we might have several days of no power coming with hurricane winds and rain. I have laid in a supply of books to read.

mark, don’t forget the candles just in case you want to read yourself to sleep.

My local store had a bunch of candles on clearance sale a couple of weeks ago. I got several packs. Good to go here. 🙂

I’ve been prepping for the past three days. I expect to be without power at least thru the middle of next week.

if a chipmunk farts nearby I lose power here (rural maine) so always have generator ready to go.
and I even have spare generator at neighbors house in case main one fails.
am glad I don’t have to deal with this stuff like lower sections of east coast do though.

Interesting earthnullschool only showing 120kmph winds or about 80mph winds on the NE corner of the system.

Just from the first feeder band thunderstorms, already over 7000 in Miami-Dade and 4000 in Broward Counties without power per FPL emergency services at 1430. Gusts to 45 now, steady 25+mph. Surf now massively breaking over the reef. Matthew is still 9 hours and about 150 miles away.

I am monitoring the station on Kirginia Key, which has the anemometer just above 10m of elevation. Reports are posted every 6 minutes, with 1/2 hour delay.
http://www.ndbc.noaa.gov/station_page.php?station=vakf1

You’ve never had to read our hurricane prep post, so I’d like to share it. It’s a soup to nuts how-to, from when you have days to when you don’t, down to what to do inside to make it comfortable and how to secure your belongings and yourself. We’ve been through 3 major hurricanes, so the things we suggest are hard won advice and not found on any well meaning government prep list.
http://coalitionoftheswilling.net/?p=23937

Wow, some good advice there. 🙂

I wonder what this would do to a state or region with a large scale offshore wind power system, not just one farm but many?

At the Settlement Point Bahama station which should be getting pounded about now winds speeds are only
25mph sustained and gusts of 30mph. Is this thing losing gas?

Florida Power and Light reported about 7000 homes in Miami-Dade, 4000 in Broward and 1000 in Palm Beach County without power, about an hour ago. Crews are out, and power has already been restored in some places. Conditions have not kept crews from working, yet. Wind gusts have been up to around 50 or so where I am, about 1 mi. from the Ft. Lauderdale beach. That’s not too bad, but enough to drop tree limbs and palm fronds down onto power lines. But so far, everything seems local and isolated in scope. High tide was not too bad, with a 1/4 moon. I’m so glad we’re almost 2 weeks out from a fall full moon King tide. If the worst of the storm hits around 8 pm tonight, as some have predicted, it will pass at or shortly after low tide, which is very good from a street flooding perspective. Then flooding will depend on trailing rain bands. There has been spotty rain, so far, not much total accumulation, but streets and highways are wet in most places. There are still a few people and surfers out at the beach taking pictures and having an adventure, as well as news reporters. Surf looks to be about 5 or 6 foot, with short, choppy wave lengths. And that’s your WUWT report from Fort Lauderdale.

Any particular value in building models to estimate outages? Who’s paying for this?

I believe you can track outages with this new product.
gmap4

Losing power, eh…. obviously and only due to the wind turbines in Florida?

Florida Power and Light show 500,000 without power at time of posting, from over 700,000 who were affected with more than 200,000 reconnected. Numbers here:
https://www.fpl.com/storm/customer-outages.html
Relatives in Delray Beach had their power flicker a couple of times last night.
Guess which number the press are using? The model or the reality?

That’s number of customers as opposed to number of people, but still well short of 9 million!

Did our tax dollars go into this B.S. (Barbara Striesand)? Did the guys doing it wear the pointed Wizard’s hats, or the pointed DUNCE hats.