This post is similar in format to In Honor of Secretary of State John Kerry’s Global Warming Publicity-Founded Visit to Greenland…  As you’ll see, like Greenland, the consensus of the climate models used by the IPCC show that the models do not simulate the surface temperatures for the contiguous United States over any timeframe from 1861 to present.

In the past, we’ve compared models and data using time-series graphs of temperature anomalies, absolute temperatures and temperature trends, and we’ll continue to provide them in this post.  In this series, we’ve added a new model-data comparison graph:  annual cycles based on the most-recent recent multidecadal period. Don’t worry, that last part will become clearer later in the post.

We’re using the model-mean of the climate models stored in the CMIP5 (Coupled Model Intercomparison Project Phase 5) archive, with historic forcings through 2005 and RCP8.5 forcings thereafter.  (The individual climate model outputs and model mean are available through the KNMI Climate Explorer.) The CMIP5-archived models were used by the IPCC for their 5th Assessment Report. The RCP8.5 forcings are the worst-case future scenario.

We’re using the model-mean (the average of the climate model outputs) because the model-mean represents the consensus of the modeling groups for how surface temperatures should warm if they were warmed by the forcings that drive the models. See the post On the Use of the Multi-Model Mean for a further discussion of its use in model-data comparisons.

I’ve used the ocean-masking feature of the KNMI Climate Explorer and the coordinates of 24N-49N, 125W-66W to capture the modeled near-land surface air temperatures of the contiguous United States, roughly the same coordinates used by Berkeley Earth.

Near-surface air temperature observations for the contiguous U.S. are available from the Berkeley Earth website, specifically the contiguous United States data here. While the monthly data are presented in anomaly form (referenced to the period of 1951-1980), Berkeley Earth provides the monthly values of their climatology in absolute terms, which we then simply add to the anomalies of the respective months to determine the absolute monthly values.   Most of the graphs, however, are based on annual average values to reduce the volatility of the data.

The model mean of surface temperatures at the KNMI Climate Explorer starts in 1861 and the Berkeley Earth data end in August 2013, so the annual data in this post run from 1861 to 2012.

Figure 1 includes a time-series graph of the modeled and observed annual near-land surface air temperature anomalies for the contiguous U.S. from 1861 to 2012. Other than slightly underestimating the long-term warming trend, at first glance, the models appear to do a reasonable job of simulating the warming (and cooling) of the surfaces of the contiguous United States. But as we’ll see later in the post, the consensus of the models misses the multidecadal warming from the early 1910s through the early 1940s. 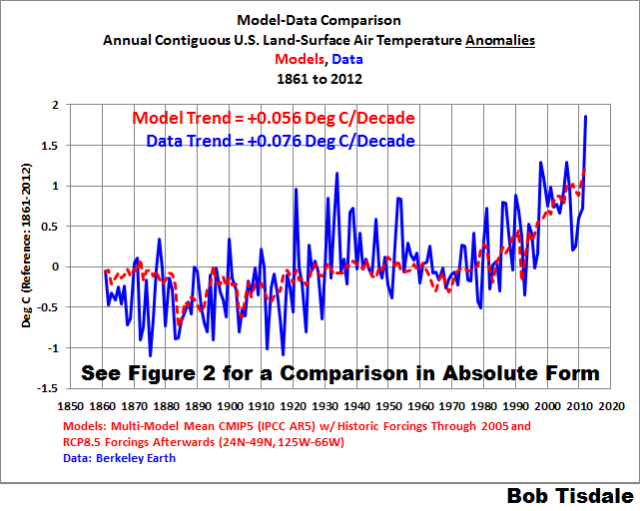 Keep in mind, Figure 1 is how climate modelers prefer to present their models, in anomaly form.

Figure 2 gives you an idea of why they prefer to present anomalies. It compares the modeled and observed temperatures on an absolute basis. Not only do the models miss the multidecadal variations in the surface temperatures of the contiguous United States, the consensus of the models is running too cold.  That of course would impact how well the models simulate temperature-related factors like snowfall, drought, crop yields and growing seasons, heat waves, cold spells, etc.

Climate is typically defined as the average conditions over a 30-year period.  The top graph in Figure 3 compares the modeled and observed average annual cycles of the contiguous U.S. surface temperatures for the most recent 30-year period (1983 to 2012). Over that period, data indicate that the average surface temperatures for the contiguous U.S. varied from about +0.0 deg C (+32 deg F) in January to roughly +24.0 deg C (+75 deg F) in July.  On the other hand, the consensus of the models show they are too cool by an average of about 1.4 deg C (2.5 deg F) over the course of a year.

THE MODELS ARE PRESENTLY SIMULATING AN UNKNOWN PAST TEMPERATURE-BASED CLIMATE IN THE CONTIGUOUS UNITED STATES, NOT THE CURRENT CLIMATE

Let’s add insult to injury. For the top graph in Figure 4, I’ve smoothed the data and model outputs in absolute form with 30-year running-mean filters, centered on the 15th year. Again, we’re presenting 30-year averages because climate is typically defined as 30 years of data.  This will help confirm what was presented in the bottom graph of Figure 3.

For the bottom graph in Figure 4, I’ve extended the model outputs out into the future, to determine when the models finally simulate the temperature-based climate for the most-recent 30-year period. The horizontal line is that average data-based temperature for the period of 1983-2012.  Clearly, the future models are out of sync with reality by more than 3 decades.

Keep the failings shown in Figure 4 in mind the next time an alarmist claims some temperature-related variable in the contiguous U.S. is “just as predicted by climate models”.   Nonsense, utter nonsense.

The top graph in Figure 5 shows the modeled and observed 30-year trends (warming and cooling rates) of the surface air temperatures for the contiguous U.S. If trend graphs are new to you, I’ll explain. First, note the units of the y-axis.  They’re deg C/decade, not simply deg C.  The last data points show the 30-year observed and modeled warming rates from 1983 to 2012, and it’s shown at 2012 (thus the use of the word trailing in the title block). The data points immediately before it at 2011 show the trends from 1982 to 2011. Those 30-year trends continue back in time until the first data point at 1890, which captures the observed and modeled cooling rates from 1861 to 1890 (slight cooling for the data, noticeable cooling for the models). And just in case you’re having trouble visualizing what’s being shown, I’ve highlighted the end points of two 30-year periods and shown the corresponding modeled and observed trends on a time-series graph of temperature anomalies in the bottom cell of Figure 5.

A few things stand out in the top graph of Figure 5. First, the observed 30-year warming rates ending in the late-1930s, early-1940s are comparable to the most recent observed 30-year trends. In other words, there’s nothing unusual about the most recent 30-year warming rates of the surface air temperatures for the contiguous U.S.  Nothing unusual at all.

Fourth: The fact that the models better simulate the warming rates observed during the later warming period is of no value.  The model consensus and data indicate that the surface temperatures of the contiguous United States can warm naturally at rates that are more than 2.5 times higher than shown by the consensus of the models.  This suggests that the model-based predictions of future surface warming for the contiguous U.S. are way too high.

Climate science is a model-based science, inasmuch as climate models are used by the climate science community to speculate about the contributions of manmade greenhouse gases to global warming and climate change and to soothsay about how Earth’s climate might be different in the future.

The climate models used by the Intergovernmental Panel on Climate Change) IPCC cannot properly simulate the surface air temperatures of the contiguous United States over any timeframe from 1861 to present.  Basically, they have no value as tools for use in determining how surface temperatures have impacted temperature-related metrics (snowfall, drought, growing periods, heat waves, cold spells, etc.) or how they may be impacting them presently and may impact them in the future.

As noted a few times in On Global Warming and the Illusion of Control – Part 1, climate models are presently not fit for the purposes for which they were intended.

OTHER POSTS WITH MODEL-DATA COMPARISONS OF ANNUAL TEMPERATURE CYCLES

This is the third post of a series in which we’ve included model-data comparisons of annual cycles in surface temperatures.  The others, by topic, were:

212 thoughts on “In Honor of the 4th of July, A Few Model-Data Comparisons of Contiguous U.S. Surface Air Temperatures”