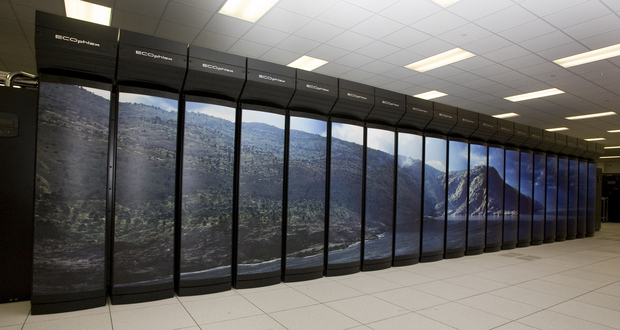 The Cray Ecoplex NOAA GAEA supercomputer used for modeling at Oak Ridge Lab. GAEA was funded by a $73 million American Reinvestment and Recovery Act of 2009 investment through a collaborative partnership between NOAA and the Department of Energy.

We found two pairs of surprising statistics. To do this we first searched the entire literature of science for the last ten years, using Google Scholar, looking for modeling. There are roughly 900,000 peer reviewed journal articles that use at least one of the words model, modeled or modeling. This shows that there is indeed a widespread use of models in science. No surprise in this.

However, when we filter these results to only include items that also use the term climate change, something strange happens. The number of articles is only reduced to roughly 55% of the total.

In short it looks like less than 4% of the science, the climate change part, is doing about 55% of the modeling done in the whole of science. Again, this is a tremendous concentration, unlike anything else in science.

This simple analysis could be greatly refined, but given the hugely lopsided magnitude of the results it is unlikely that they would change much.

Climate science appears to be obsessively focused on modeling. Modeling can be a useful tool, a way of playing with hypotheses to explore their implications or test them against observations. That is how modeling is used in most sciences.

Here the problem is that the scientific understanding of climate processes is far from adequate to support any kind of meaningful forecasting. Climate change research should be focused on improving our understanding, not modeling from ignorance. This is especially true when it comes to recent long term natural variability, the attribution problem, which the modelers generally ignore. It seems that the modeling cart has gotten far ahead of the scientific horse.

Climate modeling is not climate science. Moreover, the climate science research that is done appears to be largely focused on improving the models. In doing this it assumes that the models are basically correct, that the basic science is settled. This is far from true.

The models basically assume the hypothesis of human-caused climate change. Natural variability only comes in as a short term influence that is negligible in the long run. But there is abundant evidence that long term natural variability plays a major role climate change. We seem to recall that we have only very recently emerged from the latest Pleistocene glaciation, around 11,000 years ago.

Billions of research dollars are being spent in this single minded process. In the meantime the central scientific question – the proper attribution of climate change to natural versus human factors – is largely being ignored.