In the November 17, 2015 post here (WattsUpWithThat cross post here), we discussed the recent alarmist claims by the mainstream media and members of the climate science community about the strength of the current El Niño, showing how and why the 1997/98 El Niño was actually stronger than the one we’re presently experiencing. We clearly illustrated that the El Niño developing this year is focused more toward the central equatorial Pacific…in the NINO3.4 region.  That NINO3.4 region was the only region examined by the mainstream media.  But those articles overlooked the eastern equatorial Pacific (the NINO3 and NINO1+2 regions), where the El Niño of 1997/98 was noticeably stronger than the current one. (See the map here for the locations of the NINO regions.)

THE CAUSE OF THE HUBBUB

Figure 1 shows a graph of the weekly sea surface temperature anomaly data for the NINO3.4 region of the equatorial Pacific that was used to support the misleading alarmist claims about the strength of the current El Niño. The data source is the NOAA Climate Prediction Center (CPC) Monthly Atmospheric & SST Indices webpage, specifically their Weekly OISST.v2 data. As shown in Figure 1, there was a recent uptick in the weekly sea surface temperature anomalies for the NINO3.4 region, which showed its value exceeding those reached at the peak of the 1997/98 El Nino.

That NOAA Optimum Interpolated sea surface temperature dataset (a.k.a. Reynolds OI.v2) is based on observations from ship inlets, buoys (both moored and drifting) AND from satellites.

Note:  The drifting buoys are not ARGO floats.  ARGO floats only appear at the surface every 10 days to communicate with satellites, while the drifters are always on the surface. [End note.]

Unlike datasets that rely only on ship inlet and buoy observations, which are only available on a monthly basis, the Reynolds OI.v2 satellite-enhanced sea surface temperature data is available in weekly and monthly formats, which is the obvious reason why NOAA uses them for their weekly ENSO indices.  (There is also a higher resolution, daily version of the Reynolds OI.v2 data, which serves as the basis for many of the daily sea surface temperature maps available around the internet.)

As discussed in the post Is the Current El Niño Stronger Than the One in 1997/98? the NINO3.4 data based on the weekly Reynolds OI.v2 sea surface temperatures are not the “official” NOAA ENSO Index.  That “official” NOAA index is their Oceanic NINO Index (a.k.a. ONI) and it shows the current El Niño lagging behind the event of 1997/98…not running alongside it in recent months.  See Figure 2. 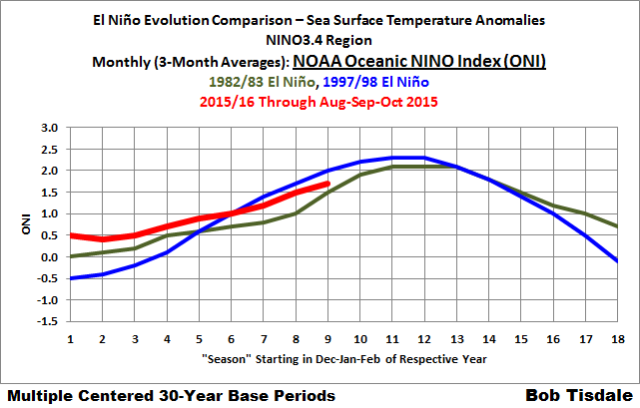 The Oceanic NINO Index is presently based on the NOAA ERSST.v4 sea surface temperature reconstruction, also known as the “pause buster” data.  It uses a 3-month running-average of NINO3.4 region sea surface temperature anomalies, but the anomalies are not referenced to a fixed 30-year period.  They use multiple base periods to supposedly account for the effects of “global warming” (See the NOAA webpage here). But, as we discussed back in 2012 when NOAA started using the multiple base periods, those shifting base years simply eliminated the impacts of the 1976 Pacific Climate shift on the NINO3.4 data, which was responsible for the long-term warming there. See the post Comments on NOAA’s Recent Changes to the Oceanic NINO Index (ONI).

And there are numerous other monthly sea surface temperature datasets.  Do they confirm or contradict the alarmist claims that the current El Niño is the strongest on record?  And are they consistent about the strengths of El Niños?  Let’s start with the…

Figure 3 includes the monthly NINO3.4 sea surface temperature anomalies during the evolutions of the 1982/83, the 1997/98 and the current 2015/16 El Niño events through October 2015, using the Reynolds OI.v2 sea surface temperature data.  Based on the weekly data (Figure 1) we might expect the monthly values to rise above the 1997 values in November.

The other satellite-enhanced sea surface temperature dataset is the UKMO HADISST.  It is a long-term reconstruction (starting in 1870) that relies on data from ship inlets and buoys to 1981 and satellite data (in addition to data from ship inlets and buoys) starting in 1982. See Figure 4.  Unfortunately, the updates of the HADISST data are delayed a few months, so we only have 2015 data through August.  But, like the Reynolds OI.v2 data, the HADISST data show the 2015 NINO3.4 sea surface temperature running neck and neck with those of 1997.

Curiously, only the satellite-enhanced sea surface temperature datasets show 2015 values comparable to those in 1997.

Also note how the Reynolds OI.v2 data show the 1982/83 NINO3.4 sea surface temperature anomalies peaking slightly higher than the 1997/98 values, while that was not the case with the HADISST data.

NOTE:  All of the monthly data presented in this post other than the weekly Reynolds data (Figure 1) and the NOAA Oceanic NINO Index (Figure 2) were downloaded from the KNMI Climate Explorer, using the WMO-preferred base years of 1981 to 2010. [End note.] 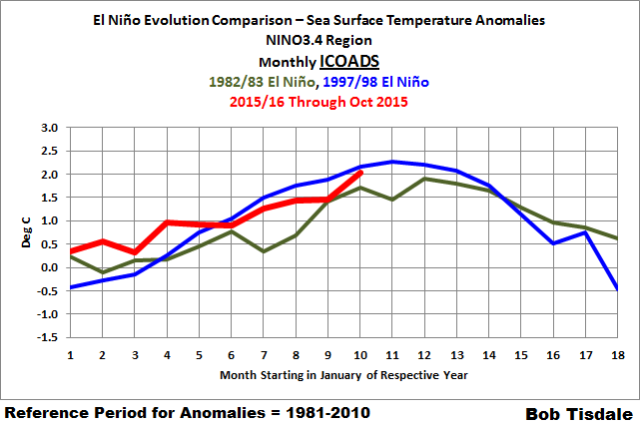 NOAA and UKMO then adjust those values for their sea surface temperature products, and in the case of the satellite-enhanced datasets (Figures 3 and 4), they then merge bias-adjusted satellite data with the buoy and ship inlet data. 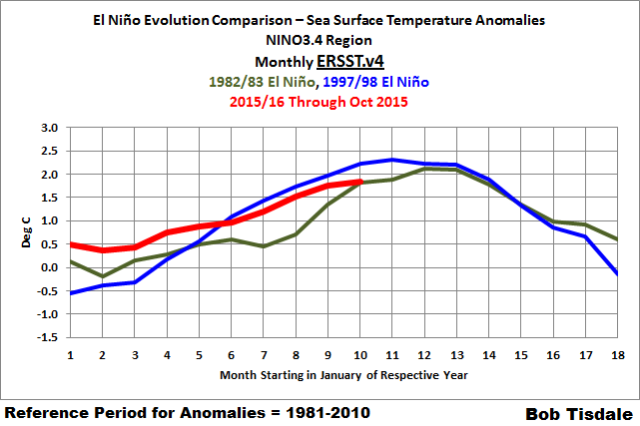 NOAA replaced their ERSST.v3b sea surface temperature product with the “pause buster” ERSST.v4 data earlier this year.  Curiously, NOAA is still maintaining the now-obsolete ERSST.v3b data. (I’ll let you speculate about that.) Figure 8 shows the evolutions of the NINO3.4 sea surface temperature anomalies for the 1982/83 El Niño, the 1997/98 El Niño and year-to-date for the 2015/16 El Niño. Like the “official” NOAA “pause buster” data, the ERSST.v3b reconstruction shows 1997/98 NINO3.4 anomalies were higher than what we’ve been experiencing recently.

And for those interested, Animation 1 compares the two NOAA ERSST products (Figures 6 and 8).

NO AGREEMENT AMONG DATASETS

As shown, there is no agreement on the values of the NINO3.4 sea surface temperature anomalies for the three El Niños and no agreement about which El Niño (1982/83 or 1997/98) had the highest NINO3.4 values.  We can also illustrate this with a spaghetti graph which includes all of the datasets, Figure 9.

Now imagine if we were to include the uncertainties of the individual NINO3.4 data, which aren’t published.

Based on the differences among datasets, we do not know for certain if the 1982/83 El Niño or the 1997/98 El Niño had the higher NINO3.4 sea surface temperature anomalies.  And we won’t know for certain whether the El Niño we’re currently experiencing will cause the NINO3.4 sea surface temperatures to reach values that exceed those reached in 1982/83 and 1997/98.

All we do know is that we’re presently experiencing a strong El Niño, which has had an impact on global surface temperatures this year, raising them to “record levels”…and will influence weather around the globe for better and worse…and may cause an upward shift in the sea surface temperatures for much of globe when all of the subsurface warm waters released by the El Niño are redistributed throughout the oceans at the end of the El Niño.

UPDATE: FOR THOSE NEW TO DISCUSSIONS OF EL NIÑO EVENTS

I discussed in detail the naturally occurring and naturally fueled processes that cause El Niño events (and their long-term aftereffects) in Chapter 3.7 of my recently published free ebook On Global Warming and the Illusion of Control (25 MB). For those wanting even more detail, see my earlier ebook Who Turned on the Heat? – The Unsuspected Global Warming Culprit: El Niño-Southern Oscillation.